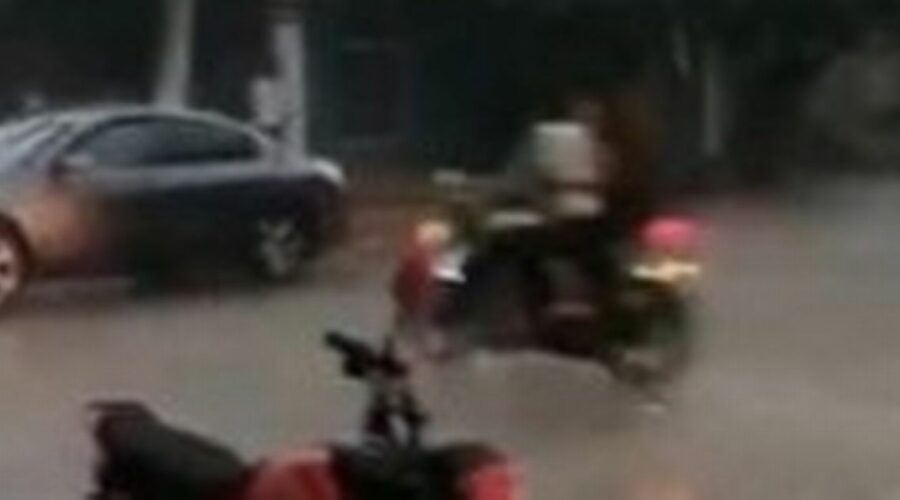 A woman was seen 'drowning in her own blood' following a horrifying high-speed crash involving a motorbike and a car.

The brutal collision was accidentally recorded by a bystander as they filmed torrential downpours of rain, which were making the roads treacherous.

It was reported to have taken place last week in Suchiate, Chiapas, Mexico.

READ MORE: Drivers could be slapped with £5k fines for not using AC during UK heatwave

Edwin Alexander, 31, and Yariset, 23, were the two people on the bike and both were left seriously injured, according to Nau.

The video shows the pair travelling at an extremely fast pace towards the junction of North Avenue and Central Poniente Street.

It is hard to tell given how quickly they are moving, but at least one appears not to be wearing a helmet.

Less than a second after they appear in the clip the pair smash into a blue car coming across the junction, to the sound of a large crunch.

Debris flies off the car as the pair fly over the handlebars and onto the road. The window and door of the car appear heavily damaged.

The seemingly helmetless person actually lands on top of the car before slumping, lifeless, onto the road.

A few seconds pass before one man runs into the road to check on them.

"Oh my god, the girl is drowning in blood," a woman can be heard screaming.

The two were reportedly rushed to the General Hospital of Tapachula Manuel Velasco Suárez where they remained in a serious condition as of July 15.

It is not yet known whether the driver of the car sustained any injuries but, according to Nau, he was actually arrested for causing the accident – despite the speed at which the bike was travelling – after he pulled out into the junction.