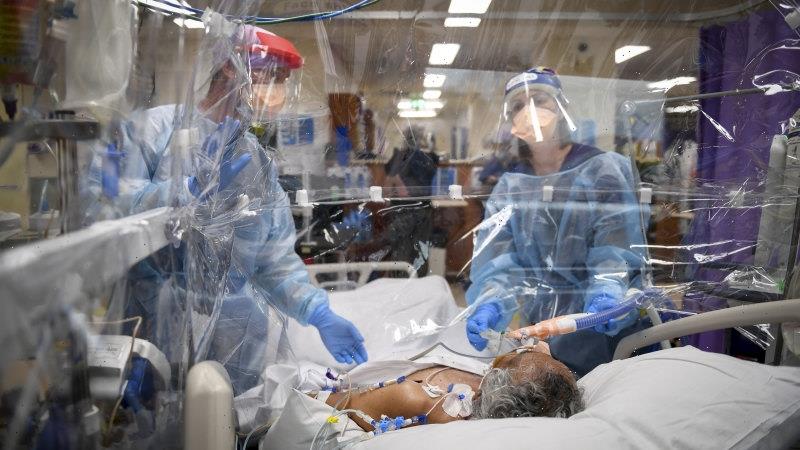 Infectious disease doctors are warning that some patients in the latest COVID-19 wave are spending longer in hospital and requiring more specialised care than those in the first Omicron outbreak.

Some physicians on the front line of Australia’s latest coronavirus wave have observed early signals the BA.5 subvariant may be increasing disease severity, amid emerging research indicating it could be more effective at infecting cells in lungs. 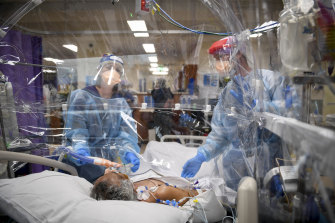 Western Health was also admitting more patients aged in their 30s, 40s and 50s who hadn’t had their third vaccine dose and were very unwell, Kainer said.

“What we are noticing is that they are sicker on the wards this time around and they are staying longer than they were during the last Omicron wave,” she said.

Many patients had illness severity somewhere between the more virulent Delta strain and earlier sublineages of Omicron, Kainer said.

“They look more clinically like Delta, but it does not appear as severe as Delta. It appears to be presenting a bit more severe than your standard Omicron.”

In his most recent health advice to the state government, Victorian acting chief health officer Ben Cowie warned that the now dominant BA.4 and BA.5 strains of the Omicron variant were more contagious and better at evading immunity from vaccination and prior infections.

He noted emerging – though not conclusive – evidence that these strains may also cause more severe illness than their viral antecedents. Across Australia, coronavirus hospitalisations have soared past 5300.

Kainer said that during the first Omicron wave patients were staying in hospital at Western Health for an average of three or four days. Now, many needed to stay a week or two.

In Queensland, where coronavirus hospitalisations have topped 1000, infectious diseases physician Dr Paul Griffin said “there has to be something in the severity of BA.5 to at least partly account for that”.

Griffin said he was treating higher numbers of older people, but also younger patients, including some in their 30s who were severely ill.

“It’s not exclusively older people,” he said. ”Anecdotally, we are seeing people with more prolonged and more significant lung issues than perhaps we saw before and some of that could be the immune evasion of the new subvariants or people being boosted some time ago before the eligibility changed.”

But infectious diseases physician Greg Dore, who works at St Vincent’s Hospital in NSW, remains unconvinced BA.5 is more severe. If this were the case, he said, intensive care units across the country would be filling up.

“Our ICU numbers [in NSW] are less than half of what they were in January,” he said. “The data does not back up an increase in severity.“

Dore said many people hospitalised with coronavirus this time were older and had co-morbidities, increasing the risk they would be sicker and require treatment longer. The first Omicron wave, he said, overwhelmingly infected Australians aged in their 20s and 30s.

Professor Peter Collignon, an infectious diseases physician who works at Canberra Hospital, also believes it is too soon to determine if BA.5 is more severe than previous Omicron subvariants.

“What is beyond doubt is that there’s a lot of people in hospital and the reality is it’ll take a while to unravel it,” he said. Kainer’s and Griffin’s clinical insights were important, he said, but large datasets examining more patients were needed.

Kirby Institute virologist Associate Professor Stuart Turville, who has been studying BA.5, said there were early signs the subvariant may infect people differently to other Omicron strains.

“Essentially, it has expanded its options to infect us,” he said.

His team, which has published a pre-print report that is yet to be peer-reviewed, indicates that BA.5 is more likely to target the lower respiratory system than other Omicron variants – “with a potential increase in disease severity and infection within lung tissue”.

Turville pointed to a recent pre-print publication from a Japanese research group, which found in a lab-based study that BA.4-BA.5 was able to replicate more efficiently in the lungs of hamsters than BA.2, targeting the lung tissue and causing more severe disease.

But, crucially, Turville said lab-based and animal studies did not consider immunity built up from prior viral infection or the power of widespread vaccination in humans.

“What I think is driving the wave is that BA.5 is getting into our bodies a little bit differently than before,” he said.

“But importantly, we’ve got maturation of the immune response, or at least enough breadth to cover BA.5, so it is not translating to increased death, but unfortunately, it’s putting our hospitals under the pump.”

As experts warn coronavirus is on track to become a leading cause of death in Australia, Kainer said there remains “huge opportunities” to reduce the numbers of coronavirus deaths.

“There’s a lot of people in Australia who are eligible for their third or fourth dose, who have not yet got that, and it makes a big difference in terms of reducing your chances of getting severely sick,” she said.

“Wearing masks indoors, isolating when you’re unwell and social distancing … doing all the things we have learnt over the last two years make such a difference.”