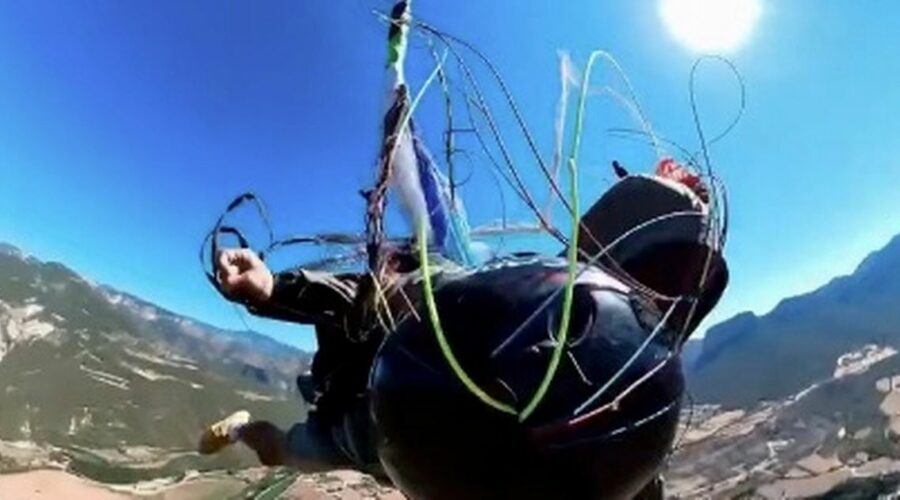 A long-time paraglider is "lucky to be alive" after he fell hundreds of feet to the ground without a parachute.

Kevin Philipp was horrified when a routine flight session went horribly wrong after the cords of his glider became entangled by high winds.

The brave – and lucky – extreme sports fanatic shared a video of the terrifying ordeal on his acrobatic paragliding YouTube channel on Monday (August 1).

READ MORE: 'Destructive' identical twins doused themselves in fuel and tried to blow up Esso garage

Viewers can see the intrepid adventurer unsuccessfully try to get the glider back to its normal position after he was hit by devastating gusts of wind.

In mere seconds the lines wrap around him completely and Kevin is seen plummeting back to Earth at breakneck speed as his parachute folded and was whipped into a tailspin, the Mirror reports.

A terrified Kevin can then be seen surrounded by loose ropes flailing around him as the floor of the desert appears to draw ever closer with each passing second.

But Kevin was able to save himself from a terrible fate when, in what he claims was just one second to go, he made the snap decision to pull the lines off him, and in the nick of time was able to release a life-saving emergency parachute.

Thanks to his experience and quick thinking, Kevin landed among some plants and made it out of the horror crash with little more than a few scratches.

Kevin warned in the caption of the video: "In acrobatic paragliding we face a lot of tries and errors in learning the tricks.

"With 2-3 rescue parachutes and a lot of height we can safely train this kind of sport."

Kevin has been posting his acrobatic paragliding on YouTube for five years and is no newcomer to the extreme sport.

And this brush with death doesn't seem to have deterred him, as he added at the end of his video caption: "This occasion is quite unlucky and rare. Just to keep in mind. Fly high, land safe".

The video has now racked up more than 87,000 views, with users logging on to comment messages of support.

One wrote: "Insane! This is what fighting for your life looks like. Glad you won!"

Another was astounded by Kevin's good fortune, writing: "Holy cow you got lucky".