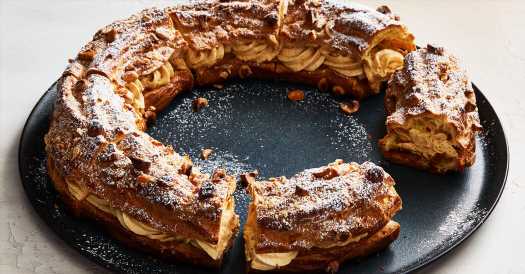 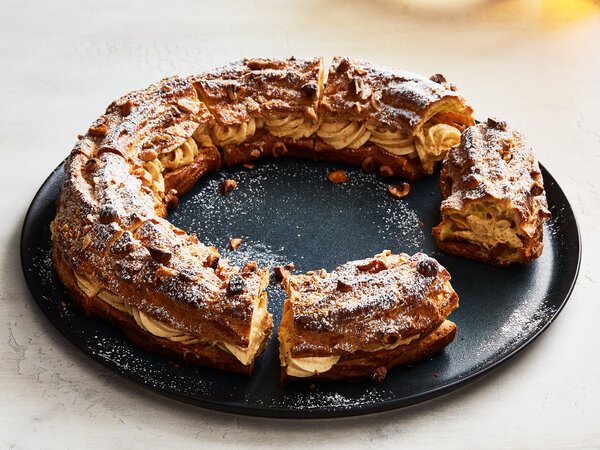 In 1910, the French pastry chef Louis Durand created the Paris-Brest (above), a ring of golden, puffed choux pastry filled with praline cream, named after a bike race that runs between Paris and the port city of Brest, in northwest France. Claire Saffitz brought us a recipe for this ethereal confection, just in time to cap a spectacular holiday meal.

Ending the year with a dessert named after a race is apropos. By this last week of December, we’ve entered the final stretch in the marathon of feasting that kicks off at Thanksgiving and runs from one holiday party to the next until the Champagne corks fly to announce the end of the old year and the start of the new one. I spent the past week of this lovely sprint celebrating Hanukkah and Christmas with family and dear friends in Los Angeles, where I got to pick Meyer lemons right off the tree. (I felt very lucky to do so, as much of the country dealt with freezing temperatures, high winds and dangerous snowfalls.)

I put those fragrant lemons to good use, whisking them into a bright yellow curd that we ate with Mexican wedding cookies at the end of a holiday dinner. The meal started with Key lime gin gimlets, also made from backyard fruit, then proceeded to rare roast beef, buttery mashed potatoes, roasted spiced cauliflower and a big bowl of garlicky puntarelle for crunchy, green balance. That same menu would work well for a smallish New Year’s Eve dinner.

Larger blowouts, however, call for nibble-friendly finger food. I’m a fan of avocado-topped nachos, maybe alongside a platter of warm ham buns, speckled with poppy seeds and melted Swiss cheese. You can never go wrong with potato chips and caviar dip on New Year’s Eve, or a double batch of shrimp cocktail to feed a crowd. And if the temperatures are still frigid where you are, mugs of hot toddy will warm everyone’s spirits as well as bones.

Maybe a New Year’s Day brunch is more your speed? You could make skillet poached eggs, served with cinnamon crumb cake muffins and a bowl of minty fruit salad. Or start the year off on the right foot with a golden brown Gruyère puff and a side of air-fryer bacon.

You’ll need a subscription for these and any of the other several thousand recipes we have at New York Times Cooking. We are also on YouTube, TikTok and Instagram, where you can learn the step-by-step for making a perfect pot of jollof rice. And for technical help, the smart folks at [email protected] will be there for you.

Now, we lost so many great souls this year, among them the author Elspeth Barker. She was an irresistible eccentric, and her novel, “O Caledonia,” as the author Ali Smith put it in The Times, is “one of the best least-known novels of the 20th century.” I’ve been listening to the audiobook with my daughter, and it’s a dark fable with a hero who dies at the start. I like a dark tale in deep winter. It feels of a piece with the air.

“O Caledonia” was reissued in the United States in 2022, which was a bonanza year for new novels. The New York Times Book Review staffers put together a list of their favorites, and I’d love to hear what books have delighted you this year. I’m at [email protected] For my part, I’m sure I’ll be spending much of 2023 just reading my way through 2022.

Sam’s back on Friday. I’ll see you next year!