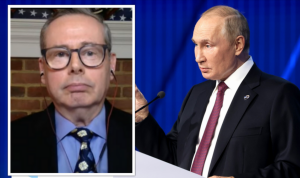 Wagner Group founder Yevgeny Prigozhin had been exposed for talking about the clumsiness of the Russian Army, taking a direct dig at Defence Minister Sergei Shoigu. Retired CIA operations officer Douglas London branded Prigozhin as an “opportunist” and discussed his time spent in prison on robbery and prostitution charges. Mr London suggested the Russian mercenary’s comments signal Vladimir Putin does not have as much sway as he seemed to over the paramilitary organisation.

Mr London told CNN: “I think it’s fascinating and I think it reflects the fact that Putin does not have the control that he’d like to have and to perhaps we sometimes attribute

“The Washington Post, in fact, identified Prigozhin as the individual it had earlier reported had confronted Putin and talked about the clumsiness and problems of the Russian military.”

Mr London added: “But Prigozhin is an opportunist, he has spent nine years in prison for robbery and prostitution charges.

“He is not exactly a military strategist and Prigozhin would at least have the room to be so public in his comments.

JUST IN: Businessman’s court fight for £200k he gave to Tinder lover

“And after all, it was his media chief from Wagner who was recently arrested, I think two weeks ago.

“For leading the campaign against the defence minister Sergei Shoigu, to have this kind of dirty linen error I think is fascinating and very revealing.”

Last month, Prigozhin was exposed for recruiting Russian prisoners, in order to send them to Ukraine to fight on the frontlines.

A leaked video showed him speaking to Russian prisoners about what was expected of them during the battle.

Putin has been trying to bolster his military presence and has put together a new committee to produce new weapons for his Russian soldiers in Ukraine.

Western military experts have been dismissing Putin’s recent threats on the West, and on Ukraine, and have claimed that there is nothing to worry about.

“He has really backed himself into a corner by the failure of his conventional attacks on Ukraine.

“He’s running out of options, and it’s quite an existential threat to both him personally and the image of Russia as a great power.

“The Russian Army has a great military force.”

He added: “Therefore some of it is for show, undoubtedly, some of it’s definitely to threaten the West to back off support of Ukraine.

“And some of it in some of his twisted logic may be a rehearsal.

“If things really go badly for him on the battlefield of how he tries to force Ukrainians to some sort of negotiated settlement.”