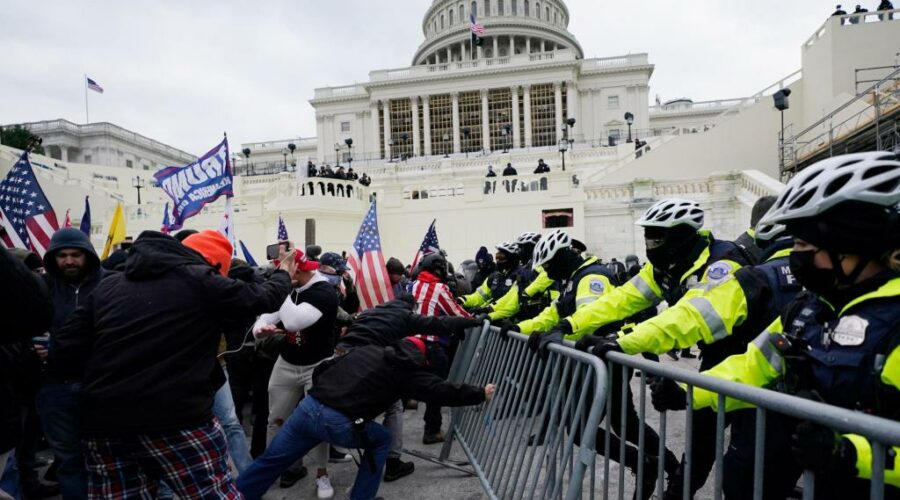 In an election season so far defined by inflation, abortion rights, and other here-and-now issues, the Jan. 6, 2021, insurrection took the spotlight at a Wednesday night campaign event with many of Colorado’s top Democrats.

The event opened routinely enough for a political rally: U.S. Rep. Joe Neguse, of Lafayette, pumped up supporters with a recounting of Democratic accomplishments since the 2020 election gave the party control of Congress and the White House, and urged optimism in November.

He name-dropped U.S. Sen. Michael Bennet, who stood to Neguse’s left and is locked in a re-election fight with Republican businessman Joe O’Dea. Then, he introduced U.S. Sen. Cory Booker of New Jersey — one of many surrogate campaigners brought by both parties in election season’s waning days.

But Booker, in addition to expected plaudits for Colorado Democrats on the ballot and Bennet in particular, expanded the night’s focus beyond Democratic policy priorities to the storming of the U.S. Capitol. As if spurred by the retelling, Colorado’s congressional members that followed also peppered their remarks with references to it and recollections of their experience then.

“The control of the House and the Senate, it’s not going to be about the left or right,” Booker said, before directly referencing the “unprecedented” attempt to disrupt democracy that day.

On Jan. 6, 2021, as Congress sat to certify President Joe Biden’s election, a mob of then-President Donald Trump’s supporters stormed the Capitol. They destroyed property and disrupted the usually mundane step in the passing of power. Nearly 1,000 people have been charged, with hundreds having pled or been convicted in connection with the incident.

Booker recounted watching then-Vice President Mike Pence being rushed from the floor of the Senate by armed security; crying staff members being ushered into the Senate and out of the halls; seeing his phone blow up with text messages asking if he was OK; an injured police officer turning to him and saying, “I was hit. I was hit.”

He recounted barricading himself in his office and finally turning on a TV. The live shot showed the Senate floor — where he was minutes before — and an insurrectionist waving a Confederate flag. He recounted the sweatshirt reading “Camp Auschwitz,” and the chants of “hang Mike Pence.”

“If America has not broken your heart, you don’t love her enough,” Booker told the crowd.

It wasn’t the first time the Jan. 6, 2021, storming of the Capitol had been mentioned so starkly on the campaign trail, and Bennet himself frequently warns of authoritarian creep that he says is spurred by underlying economic inequality. He followed Booker with echoes of Jan. 6, noting it was “our fellow citizens” who invaded the Capitol.

“My conclusion is that every election between now and when we expire is the most important election of our lifetime,” Bennet said, before pivoting to his often-issued challenge for Colorado to beat Minnesota in voter turnout. “And we have to treat it that way.”

From there, U.S. Rep. Diana DeGette, of Denver, told the crowd how U.S. Rep. Jason Crow, of Aurora, “thought he was going to save my life with a ballpoint pen” when introducing him. Crow, recalling a colleague’s Marine Corps sword hanging on his office wall that day, joked that “I know that they say the pen is mightier than the sword, but I definitely would have taken a sword.”

Attorney General Phil Weiser, running for re-election against Republican John Kellner, listed Jan. 6 among a litany of recent national stains that included the racist massacre of Black Americans in Buffalo, New York, and anti-semitic chants at a rally in Charlottesville, Virginia, in 2017.

Earlier this month, Neguse brought up Jan. 6 in urging a yes vote for Democrats Brittany Pettersen and Yadira Caraveo in the 7th and 8th Congressional Districts. Without victories there, election deniers could enter the majority in the U.S. House, he argued. The winners of those races “will determine the fate of our Republic,” he warned.

O’Dea, the Republican challenging Bennet, has drawn a distinction between people who showed at Trump’s Jan. 6 rally that preceded the storming of the Capitol and people who joined the riot that followed. The rioters who broke the law that day should be held accountable, O’Dea said, and he has chastised Trump for not doing more to stop the riot — though he doesn’t hold the then-president responsible for the Capitol being stormed.

During the Republican primary, Democrat-aligned groups spent millions on ads nominally criticizing O’Dea’s opponent, state Rep. Ron Hanks, though they did so by bolstering his conservative credentials. Hanks baselessly claims Trump truly won the 2020 presidential election. O’Dea sued over ads. Several prominent Democrats rebuked the tactic of bolstering an election-denying candidate in the hopes of an easier general election campaign.

Earlier in the campaign, Bennet declined to comment directly on that spending, saying he wasn’t involved in those ad buys.

The Democrats’ emphasis on Jan. 6 comes as a U.S. House Select Committee continues to investigate the happenings that day. That committee, which includes two Republicans recently voted unanimously to subpoena Trump to testify. The committee alleges he “personally orchestrated and oversaw a multi-part effort to overturn the 2020 presidential election and to obstruct the peaceful transition of power.”

The committee’s fate is uncertain at best if Republicans win a majority in the House in November. In February, the Republican National Committee voted to censure the committee’s Republican members, saying the committee’s work amounted to “persecution of ordinary citizens engaged in legitimate political discourse.” However, RNC leaders clarified after that vote that the language was never meant to apply to rioters who broke into the Capitol, according to the New York Times.