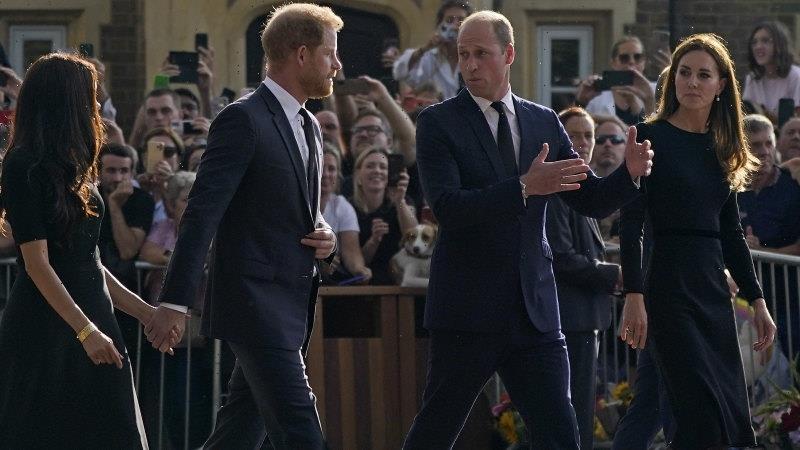 Edinburgh: Prince William has paid an emotional tribute to his grandmother as he joined his estranged brother in an impromptu public show of unity at Windsor Castle following the death of Queen Elizabeth II.

The Prince of Wales invited Prince Harry and wife, Meghan, to join him and his wife Catherine, the Princess of Wales to view the public tributes left at the Royal grounds. 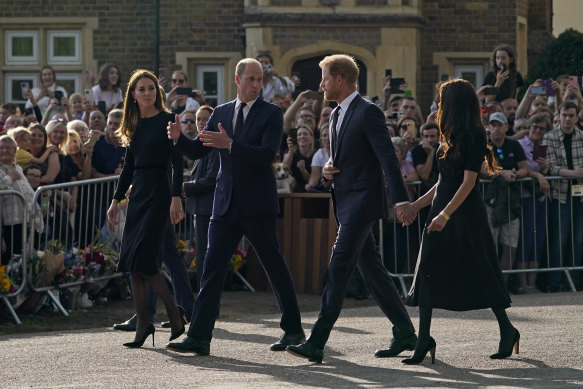 Prince William and Kate, Princess of Wales, and Prince Harry and Meghan, Duchess of Sussex walk to greet the crowds after viewing the floral tributes for the late Queen Elizabeth II outside Windsor Castle.Credit:

It followed their father, King Charles III, formally being proclaimed the nation’s sovereign in a day of pomp and ceremony at St James’s Palace in London on Saturday morning London time.

Buckingham Palace has announced the Queen’s funeral will take place at Westminster Abbey on Monday, September 19. The British government has designated the day a public holiday.

Prior to the funeral, the Queen will lie-in-state in Westminster Hall for four days, to allow the public to pay their respects. Her coffin currently rests in the ballroom at Balmoral Castle and on Sunday will travel to Edinburgh by road. It will rest in the throne room of the Palace of Holyroodhouse until Monday afternoon.

The Duke and Duchess of Sussex held hands as they looked at the tributes, and were seen pointing at different tributes and discussing them as members of the crowd waved at them.

William had earlier released a statement following the death of the late Queen saying his “Grannie” was by his side at his “happiest moments” and “during the saddest days” of his life.

The 40-year-old heir to the throne, who made a final dash in vain along with his two uncles to Balmoral on Thursday in an attempt to give his grandmother a final goodbye, praised Elizabeth II’s “wisdom and reassurance” that he had the benefit of into his fifth decade.

“The world lost an extraordinary leader, whose commitment to the country, the Realms and the Commonwealth was absolute,” he said. “So much will be said in the days ahead about the meaning of her historic reign.” 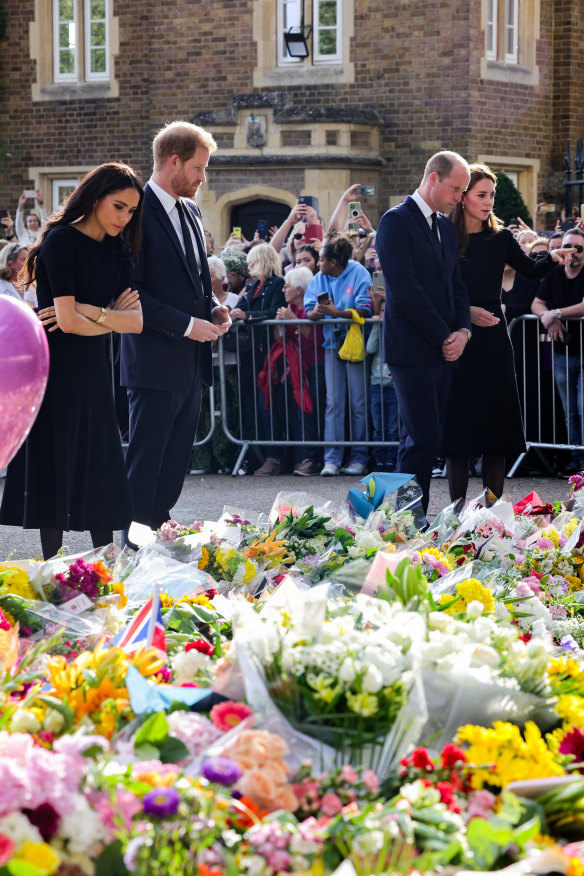 It is the first appearance of the royal couples together for more than two years.Credit:

“I, however, have lost a grandmother. And while I will grieve her loss, I also feel incredibly grateful.

“She was by my side at my happiest moments. And she was by my side during the saddest days of my life. I knew this day would come, but it will be some time before the reality of life without Grannie will truly feel real.”

Catherine, the Princess of Wales, had opted to stay at Windsor for the Queen’s final hours to support their three young children, Prince George, Princess Charlotte and Prince Louis who had begun their first week at a new school.

William said his wife had also had “20 years of her guidance and support” while his children had spent holidays with their great-grandmother and would have memories of those experiences which would “last their whole lives.” 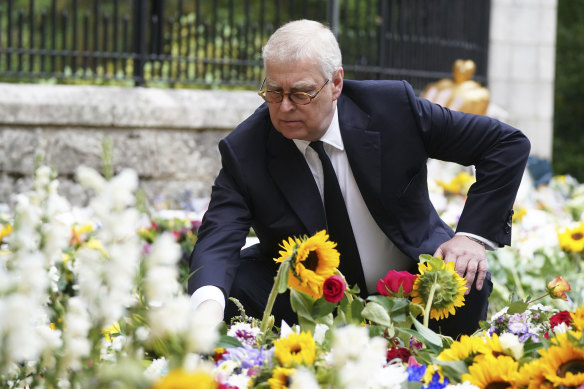 Britain’s Prince Andrew views the messages and floral tributes left by members of the public at Balmoral.Credit:

“My grandmother famously said that grief was the price we pay for love. All of the sadness we will feel in the coming weeks will be testament to the love we felt for our extraordinary Queen. I will honour her memory by supporting my father, The King, in every way I can.”

It is the first appearance of the Royal couples together for more than two years after Harry and Meghan stunned their wider family, including the then Queen, by resigning from their public duties and moving to the United States.

Harry’s relationship with his father and brother has been described by palace insiders as “severely strained”. In 2021, Harry blasted the way Charles had brought him up, telling a podcast he took his family to the US to “break the cycle of pain”.

In his first address to the nation on Saturday morning Australian time, the King was viewed as offering an olive branch to the couple when he said he wished to “express my love for Harry and Meghan as they continue to build their lives overseas”. 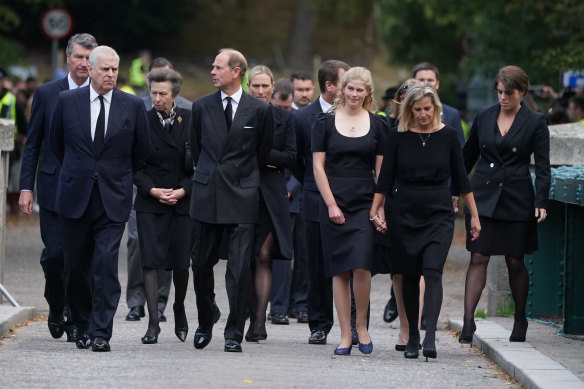 At Balmoral, Prince Andrew has been met with applause from the public as the emotion of an impromptu walkabout overwhelmed members of the Royal family.

Princess Anne, the Duke of York, the Earl and Countess of Wessex, Peter and Zara Phillips, Lady Louise Windsor, and Princesses Eugenie and Beatrice stopped to look at floral tributes outside the estate where the Queen Elizabeth.

Both Princess Eugenie and Zara Phillips were in tears as they read messages of comfort.

The Queen’s coffin will travel from Scotland by Royal Air Force aircraft from Edinburgh Airport on Tuesday evening, arriving at RAF Northolt. The coffin will be accompanied on the journey by Anne, the Princess Royal.

It will then be conveyed to Buckingham Palace by road, to rest in the Bow Room.