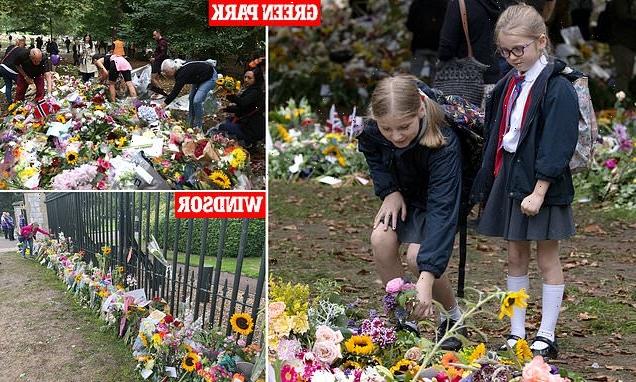 Flowers for the Queen before class starts: Schoolgirls head early to London’s Green Park to add to the growing sea of bouquets to remember Her Majesty as people leave cards and tributes at Windsor Castle from 6am

Children have journeyed to Green Park early to lay flowers for the Queen before school as the sea of floral tributes to Her Majesty continues to grow with, many more expected to pay their respects in the coming days.

Two schoolgirls have laid flowers in the central London park before class starts on Monday morning in a touching tribute to the Queen, who died ‘peacefully’ at Balmoral on September 8, aged 96.

Meanwhile, dozens of mourners arrived at Windsor Castle from as early as 6am to pay their respects and leave bouquets and heartfelt cards to the late monarch.

Teddy bears, including a miniature Paddington, and Union flags were among the non-floral tributes lining the gates of the royal residence.

Sunflowers, which have featured prominently at tribute sites across the country, were the most common bloom among the bouquets.

One mourner who travelled to Windsor Castle on Monday morning to pay their respects was 46-year-old Michelle Hill, who had come with her two daughters.

But Ms Hill said she would be donating money to a food bank in Windsor instead of laying flowers.

She said: ‘The flowers are lovely, but they will die and there are people who need dinner.’

Paying tribute to the Queen, Ms Hill said: “She was just lovely. I remember getting dressed up for her Silver Jubilee, and at all the events she was just very calm, warm, lovely.’ 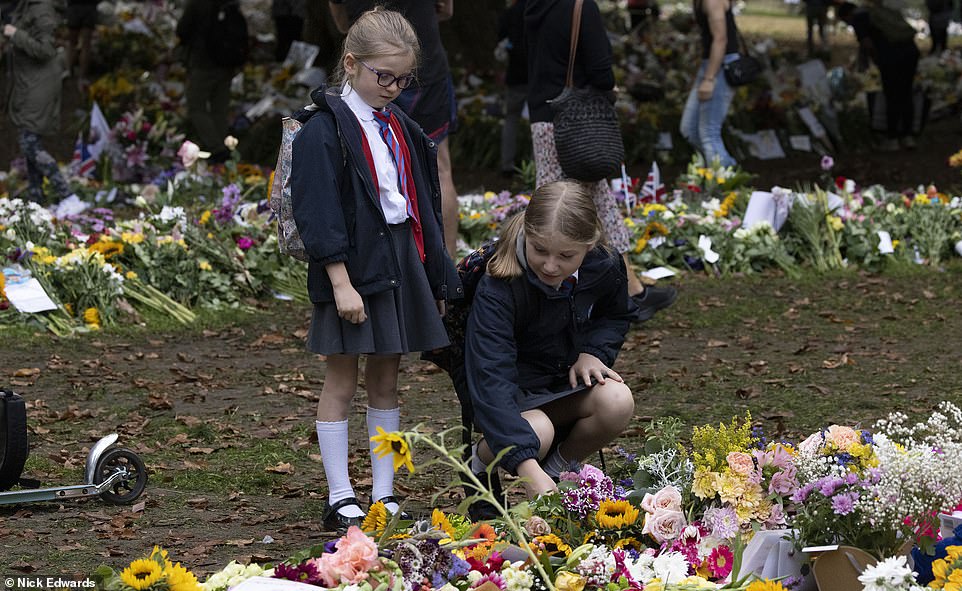 Two schoolgirls could be seen laying flowers in the central London park on Monday morning in a touching tribute to the Queen, who died ‘peacefully’ at Balmoral on September 8, aged 96 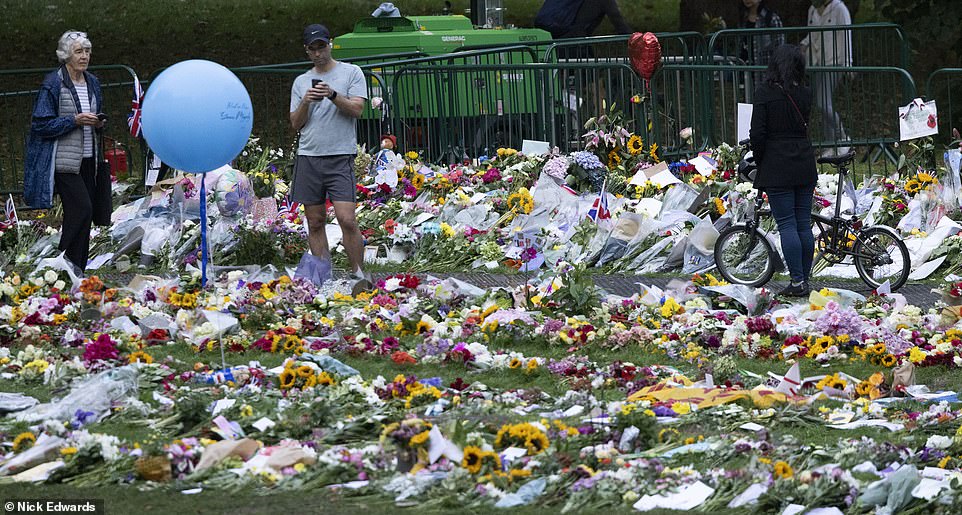 Floral tribute pictured at Green Park in central London on Monday morning. The sea of flowers laid for Her Majesty continues to grow with, many more expected to visit in the coming days 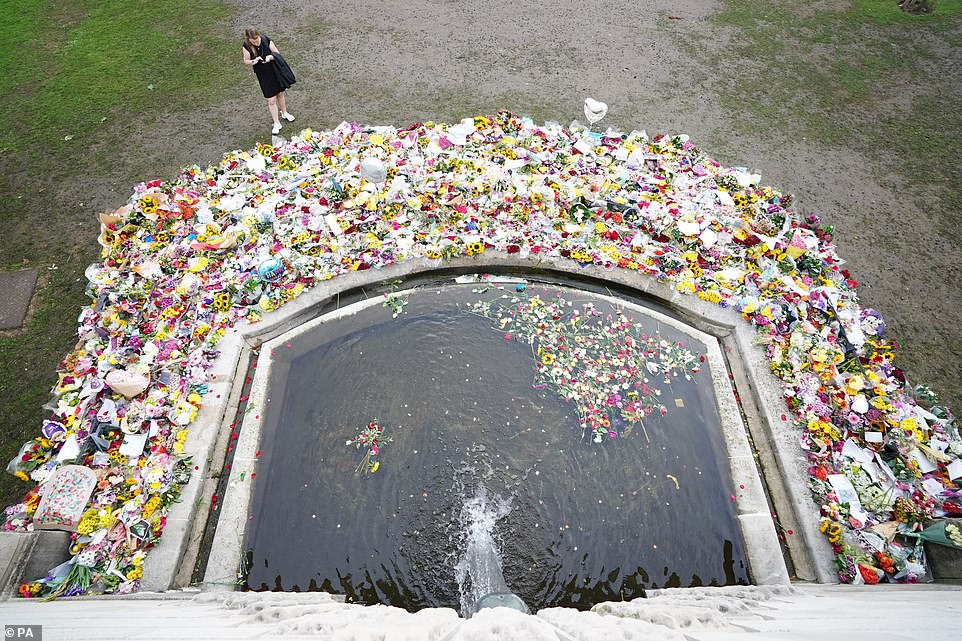 Over the weekend, people from across the world waited in lengthy queues outside Buckingham Palace and other royal residences for their chance to lay down flowers and cards for the Queen.

But the huge amount of flowers being laid in plastic packaging has prompted some mourners to tear off the wrapping to help royal gardeners in their mammouth clean-up operation.

Members of the public are being urged to take off plastic packaging before laying down bouquets so the later job of turning them into compost is made much easier.

But Royal Parks bosses have asked mourners to stop leaving Paddington Bear and marmalade sandwich tributes in honour of the Queen – and to stick to unwrapped flowers instead.

Children across the nation have paid their respects with the teddy bears and sandwiches in a nod to the delightful sketch filmed for the Queen’s Platinum Jubilee in June.

But Royal Parks, which manages the dedicated site for tributes at Green Park, said only unwrapped floral tributes should be left in memory of Her Majesty.

They are encouraging people to only leave ‘organic’ material so it can begin to decompose.

In a statement on their website issued this morning Royal Parks said: ‘Unfortunately, no gifts and artefacts will be accepted and the public will be asked not to bring these to the parks.

‘Non-floral objects/artefacts such as teddy bears or balloons should not be brought.’ 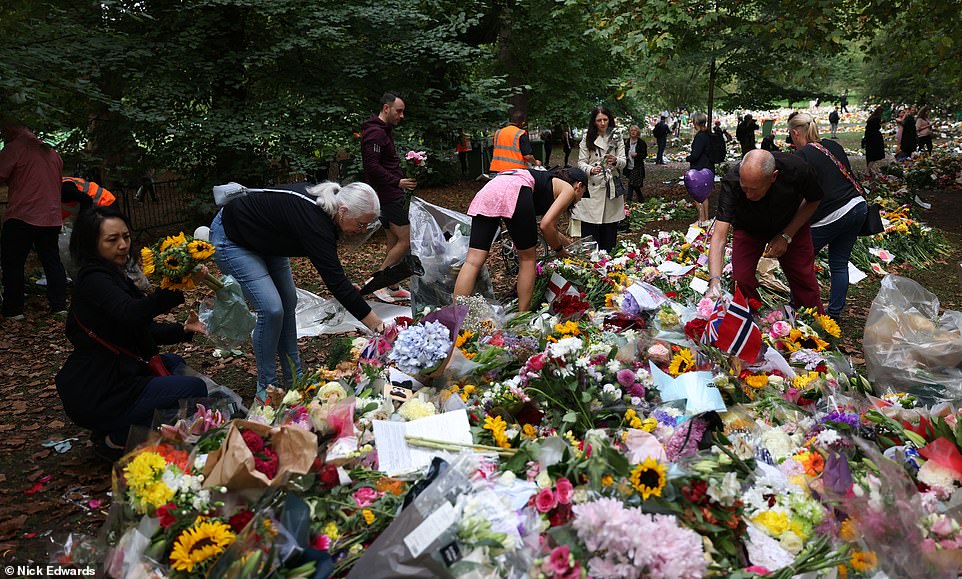 Floral tribute pictured at Green Park in central London on Monday morning. Members of the public helping arrange and prepare flowers for display following the death of the Queen 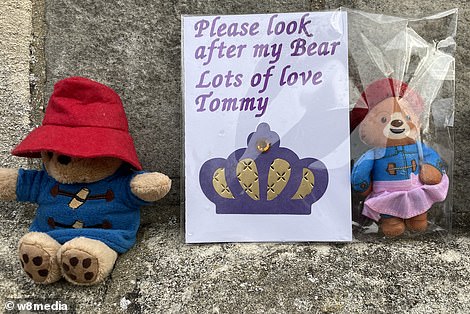 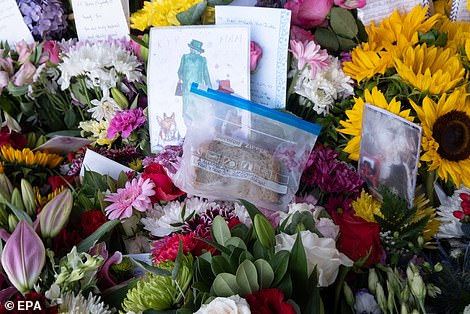 The Royal Parks, which manages the dedicated site for tributes at Green Park, said only unwrapped floral tributes should be left in memory of Her Majesty after marmalade sandwiches and Paddington Bear toys were left 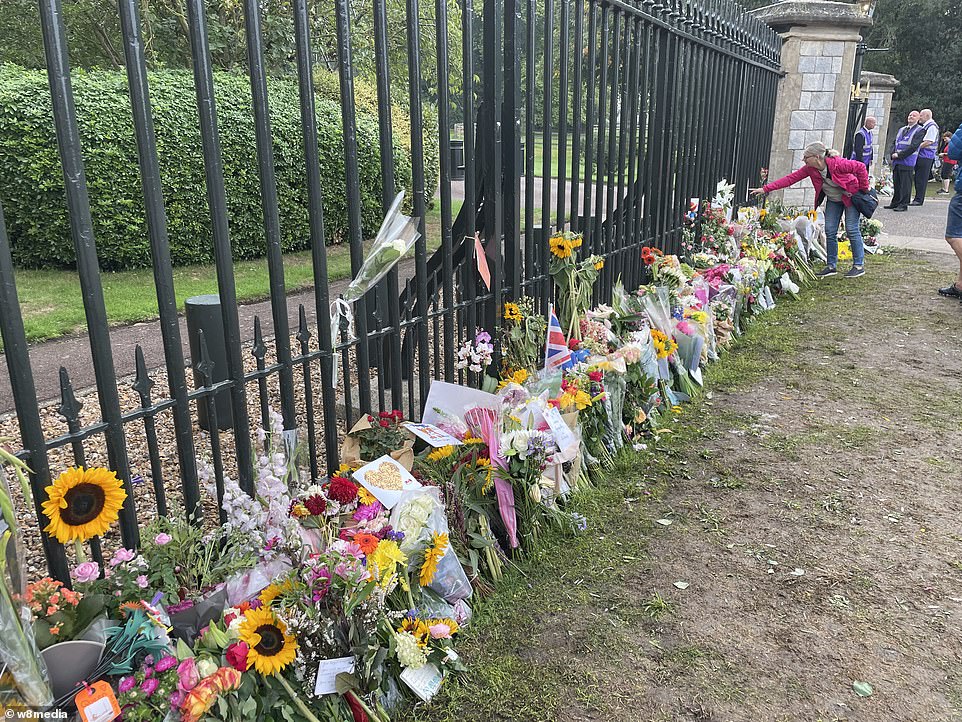 People lay flowers outside Windsor Castle on Monday morning. Dozens of mourners arrived at Windsor Castle from as early as 6am to pay their respects and leave bunches of flowers and heartfelt cards to the late monarch 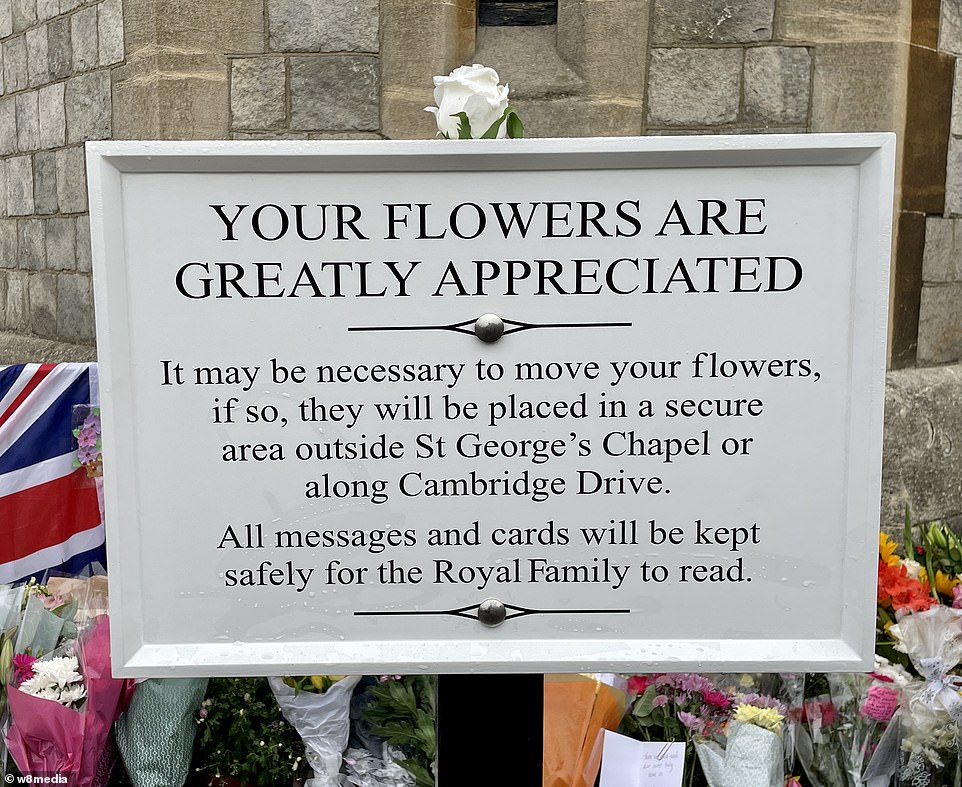 The Windsor Castle estate erected a sign for well-wishers leaving flowers which read: ‘Your flowers are greatly appreciated. It may be necessary to move your flowers, if so, they will be placed in a secure area outside St George’s Chapel or along Cambridge Drive. All messages and cards will be kept safely for the Royal Family to read’

Meanwhile, infrastructure has been set up in preparation for miles of people queuing for the Queen’s lying in state in Westminster Hall.

From 9am on Tuesday, private security staff and stewards in hi-vis vests and Metropolitan Police officers are stationed along the route, where people will be able to queue from 5pm on Wednesday to see the late monarch’s coffin.

It stretches from Parliament’s tourist entrance, Cromwell Green, down Millbank, past the Lords and Victoria Tower Gardens, across Lambeth Bridge and loops back north on the other side of the River Thames.

Portaloos and crowd control infrastructure like barriers and flooring have been now set up in to Victoria Tower Gardens.

Full details of the route will be published at 10pm on Tuesday.

Security staff manning the queue route to Westminster Hall for the Queen’s lying in state told the PA news agency that crowds are expected to swell ahead of Wednesday afternoon.

They said the queue is likely to snake for miles, all the way along the southside of the River Thames to Tower Bridge.

People will not be allowed to camp and will be given numbered wristbands to indicate their place in the queue so they are able to leave and come back, it is understood. 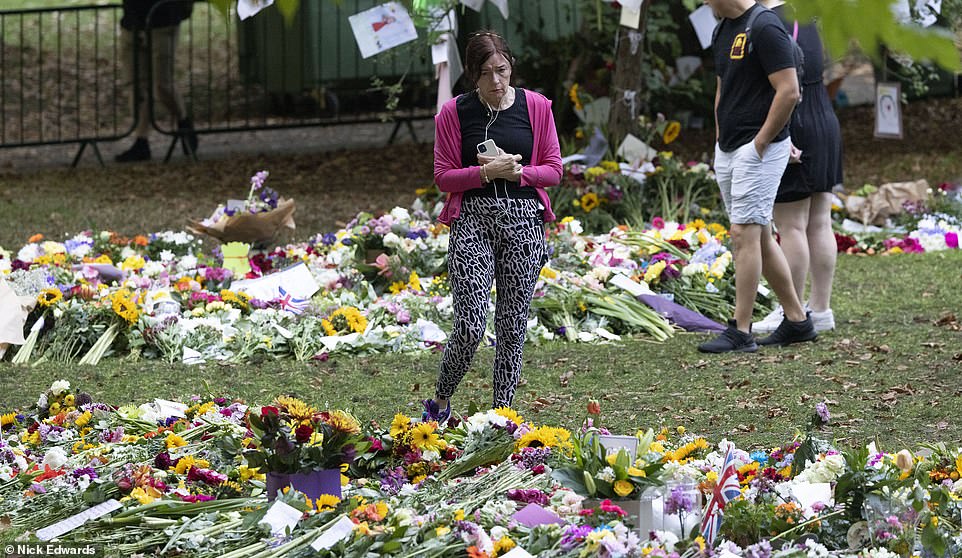 A mourner reflecting in Green Park on Monday morning. People have been laying floral tributes to the Queen at the central London park since her death on Thursday 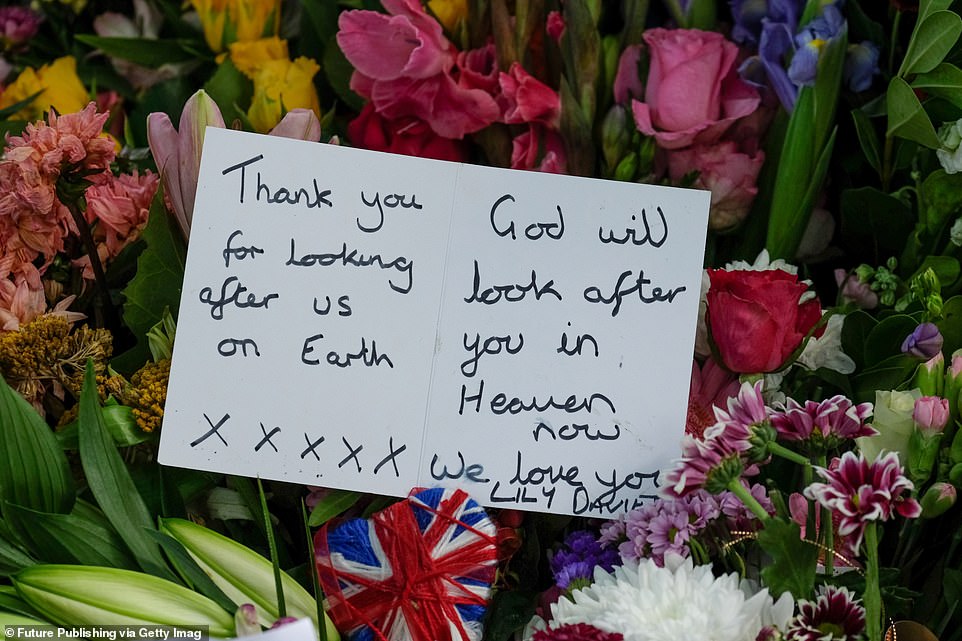 Today, as the nation continues its period of official mourning for Queen Elizabeth II, King Charles III is visiting Westminster Hall, where both the House of Commons and House of Lords will express their condolences.

He will then fly to Edinburgh with Camilla, Queen Consort, where with members of the Royal family, he will walk behind the Queen’s coffin from the Palace of Holyroodhouse to St Giles’ Cathedral.

A memorial service will be held to celebrate the Queen’s life, and members of the public will be given the opportunity to view the coffin, which will lie at rest for 24 hours, and pay their respects.

After the Queen’s doctors expressed ‘concern’ for her health last Thursday, members of the public have headed towards royal residences including Buckingham Palace, Sandringham, Windsor Castle and Balmoral, to send their well-wishes.

The numbers have only skyrocketed since the Queen’s death was announced at 6.30pm on September 8 – with many more expected in the coming days, ahead of her state funeral at Westminster Abbey on September 19, which has been confirmed as a bank holiday.

Tens of thousands of flowers have been left for Her Majesty in the days since her passing, with people travelling from across the UK and from around the world to be able to pay their respects.

Many people were seen in tears at the sight of what’s before them. 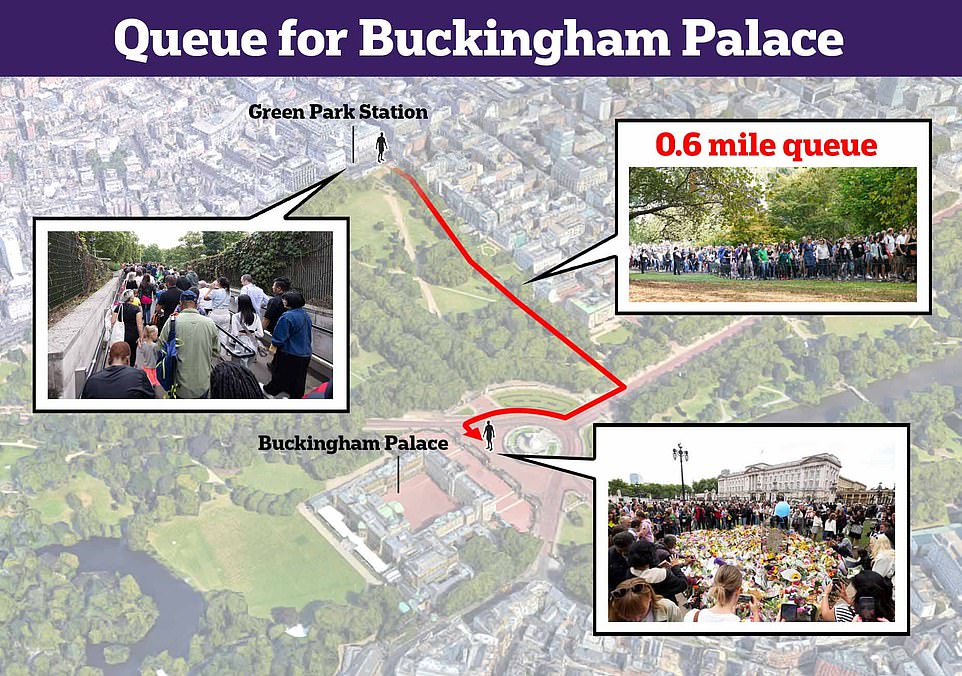 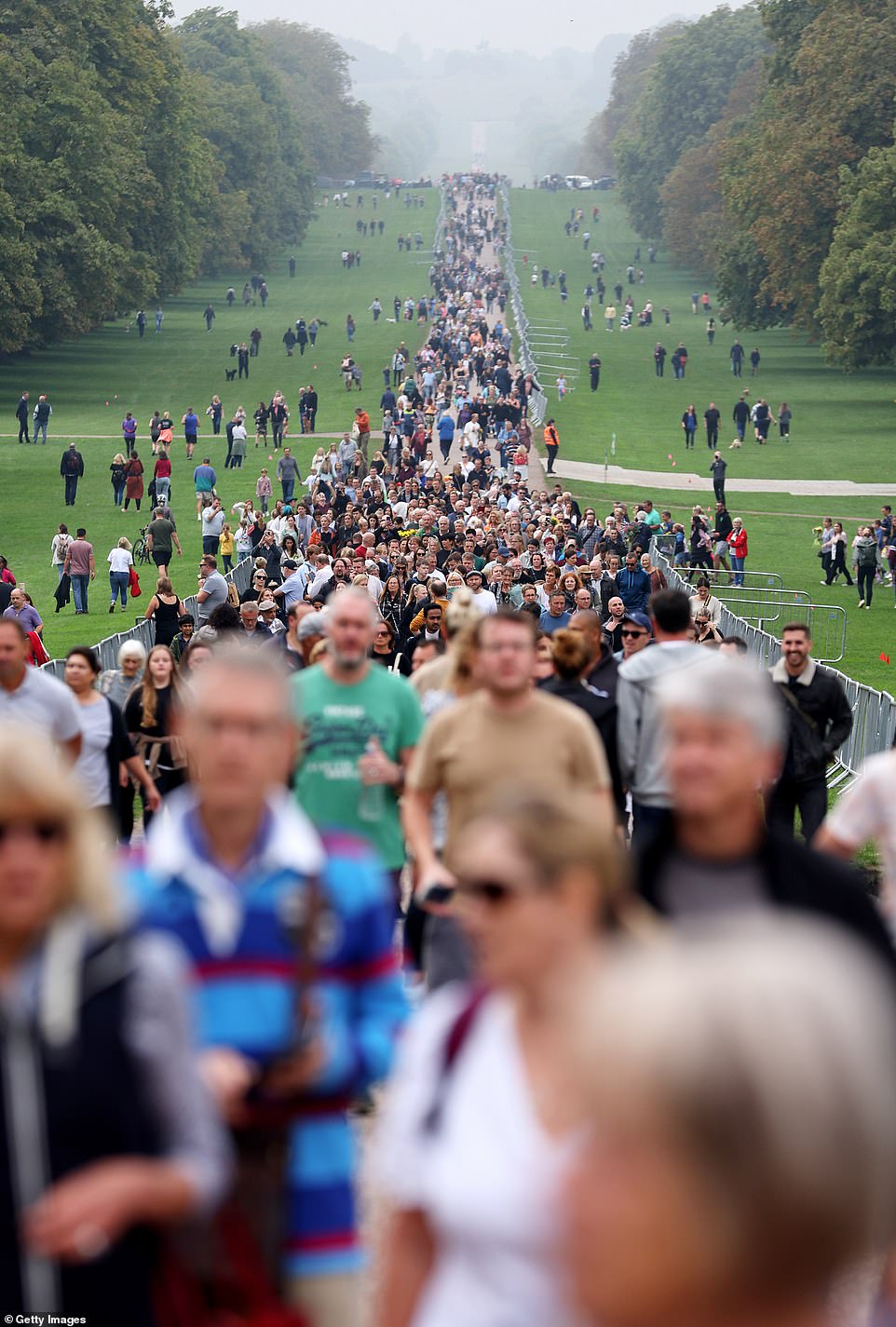 Palace gardeners have been removing bunches of flowers off the gates and moved them to Green Park to help make space for the public to continue to get as close as they can to the King’s new home as the nation comes to terms with the Queen’s death at age 96.

Members of the public have been pictured helping arrange and prepare flowers for display in Green Park due to the large volumes being laid for the Queen following her death.

Lots of young families have made their way to Buckingham Palace this weekend, with parents taking the opportunity to show such a huge moment in history to their children.

The Queen will lie in state for ‘four clear days’ in Westminster Hall from Wednesday September 14 before the funeral, a senior palace official said.

Buckingham Palace said devoted daughter Princess Anne will accompany the late monarch’s body to London ahead of the funeral, the only one from the Royal Family to do so.

On the day of the funeral at 10.44am the coffin will be taken in procession from the Palace of Westminster to Westminster Abbey where the state funeral service will take place.

Following the funeral, the coffin will be taken again in procession from Westminster Abbey to Wellington Arch, and from there to Windsor by road, where the Queen will be laid to rest in St George’s Chapel, alongside her late husband the Duke of Edinburgh.

Scottish First Minister Nicola Sturgeon said the ‘poignant’ journey would give the public a chance to come together to ‘mark our country’s shared loss’. 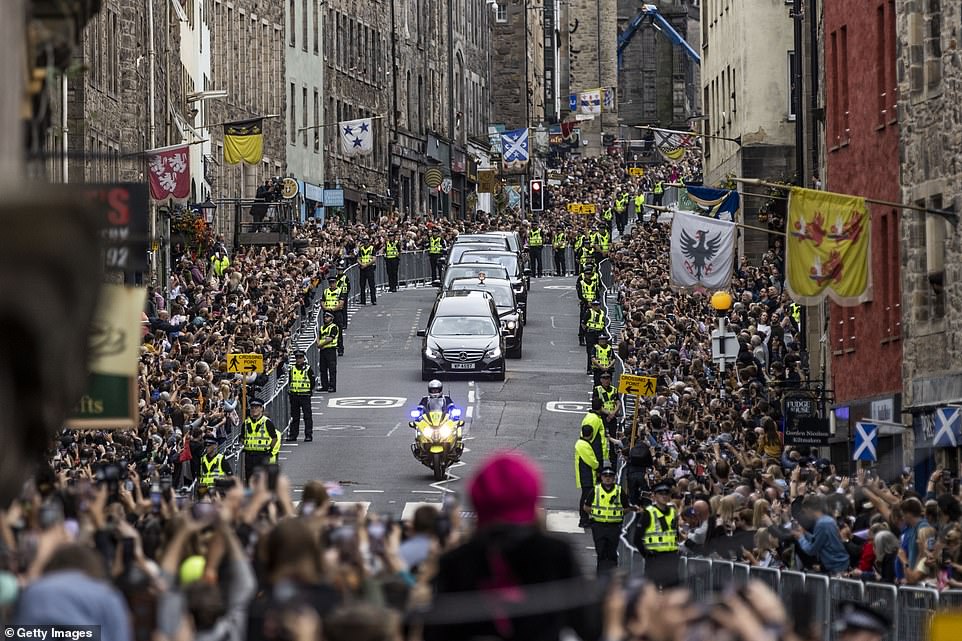 People gather on the Royal Mile in Edinburgh to watch the cortege carrying the coffin of Queen Elizabeth II. Pictured on September 11 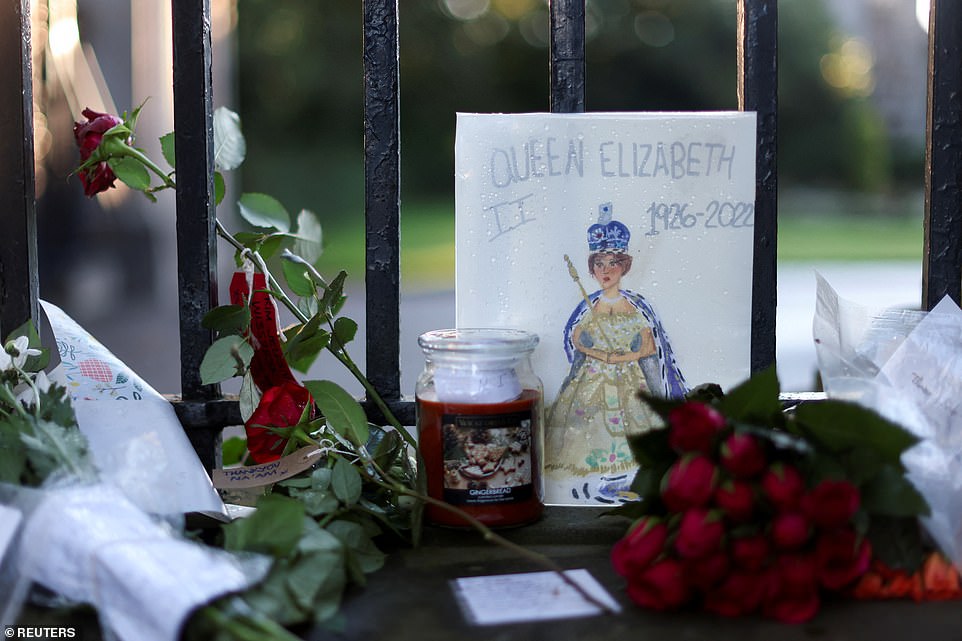 Cards, flowers  and candles laid for the late monarch outside Holyrood Palace in Edinburgh. Pictured: September 12

King Charles will lead the nation in mourning on Monday as he walks at the head of a procession of the Queen’s coffin through the streets of Edinburgh.

He will be at the front of the royal party heading from the Palace of Holyroodhouse in Edinburgh and up the Royal Mile to St Giles’ Cathedral, it has been announced.

The King and Queen Consort will fly to Edinburgh with Prince William and other members of the Royal Family to lead the procession. Some members of the family will follow in cars, with others walking.

She will then lie in state for 24 hours before being transported by plane to RAF Northolt and from there will be taken by road to Buckingham Palace.

Members of the public will be able to see the monarch lying in state at St Giles and later in London at Westminster Hall.

Thousands of people will be able to file past to see the late monarch’s coffin – and further details of how the public can attend will be announced in the coming days.

A spokesman for the King said the monarch’s main focus will be leading the royal family and nation in mourning over the coming days.

‘Whilst, in the next few days, the King will carry out all the necessary state duties, his main focus will be leading the Royal Family, the nation, the Realms and the Commonwealth in mourning Her Majesty The Queen. This will include meeting members of the public, to share in their grief,’ the spokesman said.