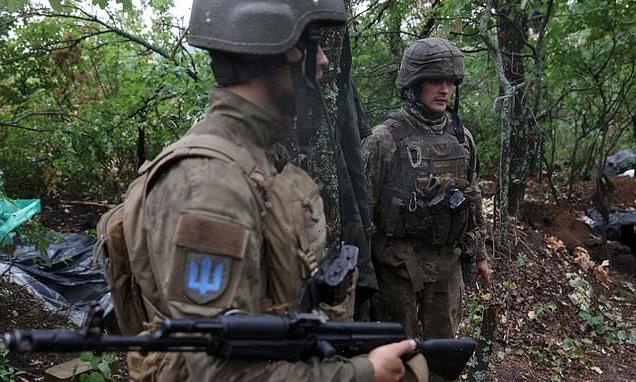 Ukraine has claimed it is raising ‘a million strong’ fighting force to regain territory lost to Russia.

A counter-offensive using Nato-supplied weapons would take the fight to Moscow’s troops in the south and east of the country, said defence minister Oleksii Reznikov.

The message was repeated by Ukraine’s deputy prime minister, who advised women and children to leave the occupied territories as a ‘major fight’ is looming.

The rise in the rhetoric from Kyiv came as it emerged that 12 Russian officers were killed when US-supplied missiles hit their command post near Kherson in southern Ukraine. 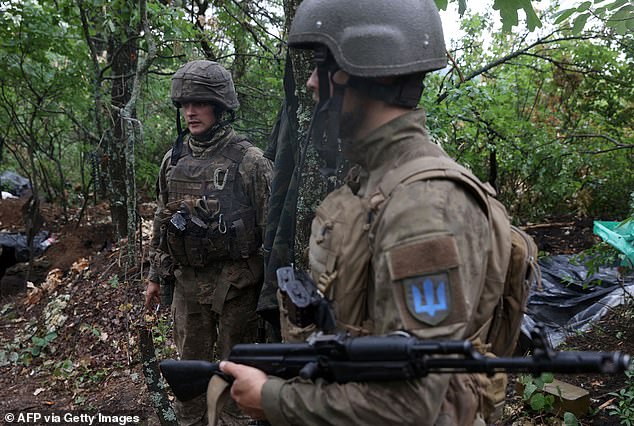 Ukrainian soldiers on the front line in the Kharkiv region on Monday July 11. The vast majority of Ukraine’s army are battling Russian forces in the east of the country 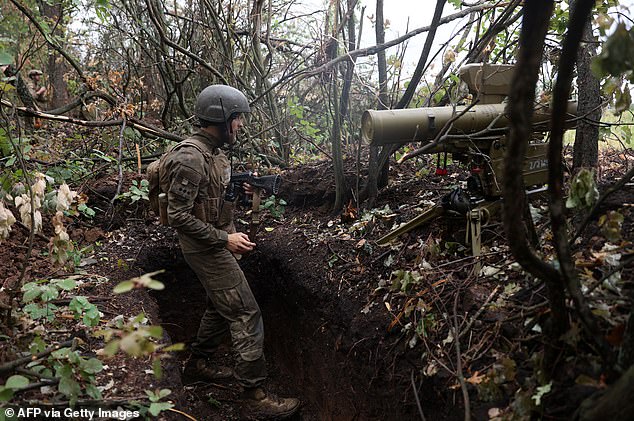 A Ukrainian soldier in the trenches of the Kharkiv region. Ukraine’s armed forces have been supplied with heavy weaponry by NATO 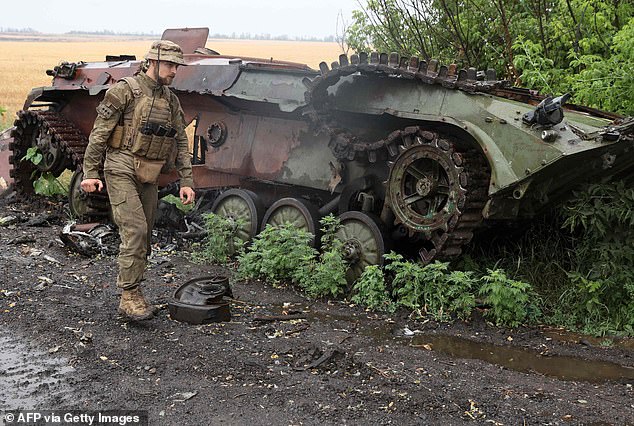 A Ukrainian soldier walks past a destroyed personnel carrier. Defence minister Oleksii Reznikov, 56, said the country’s armed forces are a million strong when including the national guard, police and border guards

Experts cast doubt on Ukraine’s ability to launch a successful counter-attack with current resources, but the defence minister suggested it will happen soon.

Mr Reznikov said yesterday: ‘This is very necessary for our country. The president has given the order.

‘We need, more quickly, to save the lives of our soldiers. Each day we are waiting for howitzers [from allies] we can lose 100 soldiers.

‘We have approximately 700,000 in the armed forces and when you add the national guard, police and border guards, we are around a million strong.’

Most of these forces are already involved in Ukraine’s bid to defend its small remaining territory in the eastern Donbas region, so could not be used in any counter-offensive there and elsewhere.

The country’s international allies and Nato military advisers have recommended that it bides its time and builds up its arsenal of Western-donated weapons.

But expectations of a Ukrainian recovery were heightened further when deputy prime minister Iryna Vereshchuk urged citizens to evacuate ahead of offensives by the country’s troops.

She said: ‘There should not be women and children there and they should not become human shields. There will be a massive fight. Our forces are coming to de-occupy.’

Amassing more rocket systems, drones and missiles will be crucial.

The most recent attack using US-supplied rockets left 12 Russian officers dead, including at least one general and one colonel.

Even Russian state TV news broadcasts were forced to acknowledge the recent successes, with one saying Ukraine had ‘struck several times at our decision-making centres with results’.

The US-donated High Mobility Artillery Rocket Systems (HIMARS) can hit targets up to 50 miles away.

The latest strike using HIMARS was at Chornobaivka airport near the Russian-occupied southern city of Kherson.

Before the HIMARS arrived, the air base was out of range for Ukrainian forces.

Plans for the counter-attack emerged as the number of Ukrainians entering European Union countries was reported to have passed six million – although three million have returned home.