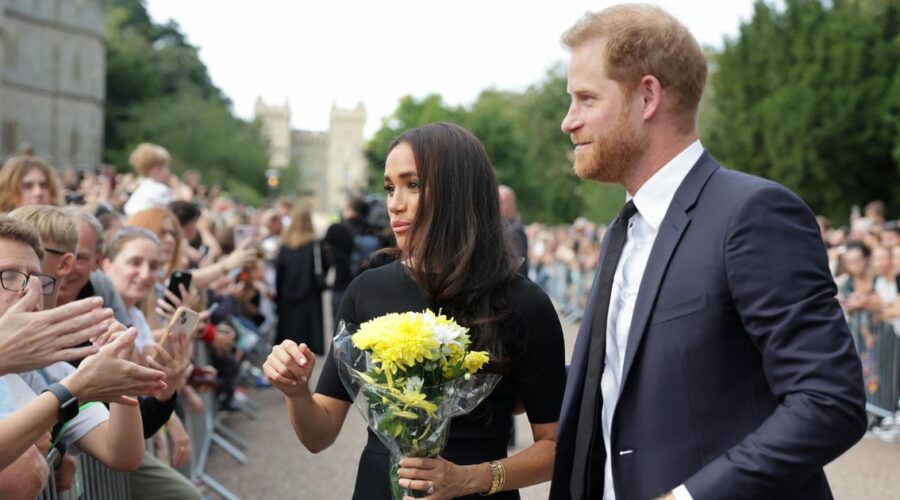 Meghan Markle's appearance at the impromptu walkabout outside Windsor Castle yesterday (September 10) appears to have won the hearts and minds of royal fans.

While the streets outside the iconic castle were lined with mourners as far as the eye could see, Meghan – the wife of Prince Harry – was inundated with bouquets of flowers.

And while her assistants by her side kept offering to take the flowers, one specific set gave Meghan a mission, and she was determined to do it.

Having turned her assistant down when asked if they could take the flowers, she appeared to say: “I told them I'd place them over there so it's OK.

“Thank you – I appreciate it though.”

Her actions were praised by some on social media.

One wrote:” Nice of Meghan to place flowers at the gate for some of the people in the crowd.”

And another wrote: “Meghan was asked by mourners to place flowers from them and that's what she set out to do for them.

“She politely told staff this and semi-curtsies to him.”

A third posted: “Meghan being so gracious and kind both to the well wisher who asked her to place the flowers there and to that intrusive staffer.

“She handled that with grace.”

Meghan had another interesting moment during the walkabout, as she spotted a fan clearly overcome with emotion.

But it wasn't from the sadness of the Queen's death on Thursday (September 8) at the age of 96.

This young woman was clearly a huge fan of Meghan's.

The woman, who had her hand over her mouth in shock as the former actress stood in front of her, asked: “Can I have a hug?”

And Meghan obliged with a huge hug.

Meghan was at the walkabout alongside her husband, and Prince William and his wife The Princess of Wales, Kate Middleton.

Crowds were heard clapping for both couples as they made their way to the castle.

It is the first time the two couples have appeared alongside each other since The Queen died.

The brothers have been thought to have been feuding for the last few years, but it now appears that they have put this aside, having arrived to the gathering together.