Ipoh, Malaysia: Leaning back on a couch in his hotel suite after a full afternoon and night on the campaign trail, Anwar Ibrahim concedes this is his last roll of the dice – his final shot at becoming prime minister of Malaysia.

“Realistically, I do have to accept that,” the 75-year-old opposition leader told The Sydney Morning Herald and The Age as he geared up for the country’s general election.

Twice jailed on charges of sodomy that were widely regarded as trumped up, the former deputy prime minister and nearly man of Malaysian politics is rallying the public to back his multiracial Pakatan Harapan (Alliance of Hope) coalition in the hope of staging victory in the November 19 polls.

He would already have had the top job had his long-time nemesis-turned ally, former prime minister Mahathir Mohamad, not backed away from a deal to hand him the reins after they joined forces in 2018 to inflict a historic defeat of the Barisan Nasional (National Front) bloc and its dominant United Malays National Organisation party (UMNO), which had ruled since independence.

Anwar was released from his second stint behind bars after that stunning election and declared a new beginning for Malaysia, whose voters had turned on leader Najib Razak, angered by the multibillion-dollar plundering of the country’s sovereign wealth fund 1MDB. 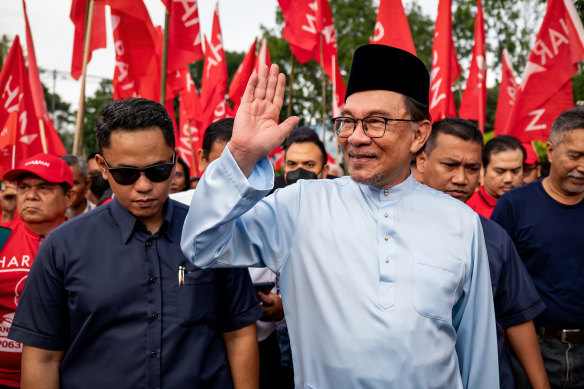 Anwar Ibrahim greets supporters as he arrives to submit his nomination in the seat of Tambun, in Perak state, on Saturday.Credit:Getty Images

Najib has since been jailed – receiving a 12-year sentence in August for criminal breach of trust, money laundering and abuse of power – but his UMNO party last year wrested back control with backroom manoeuvring, capping a turbulent 18 months in which the Harapan government collapsed and there were three prime ministers in 18 months.

Now, after calling a snap election to be controversially held in monsoon season, there is speculation that all-powerful UMNO president Zahid Hamidi, himself facing allegations of bribery and money laundering, might replace Prime Minister Ismail Sabri Yaakob if Barisan Nasional prevails.

Opponents believe Zahid could then have the charges against him dropped and Najib could walk free on a royal pardon. They are also critical of the poll being held amid the threat of flooding to inhibit campaigning and voter turnout.

It’s before this backdrop that Anwar is appealing for broad reform of a system that has been riddled with corruption and in which ethnic division has been stoked by Malay-centric identity politics. 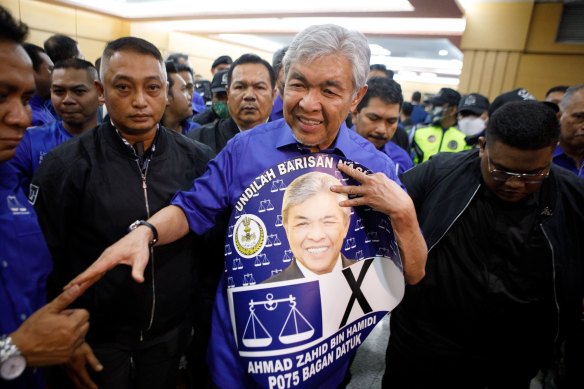 “To me, it is about saving the country, changing the political landscape of this country,” he said.

“You cannot be naive to assume that fighting a system of systemic corruption, so strongly entrenched, is going to be easy. But I’m really encouraged to see the people are prepared to listen and in many instances they are really enthusiastic and passionate about these issues.”

While Anwar and his coalition enjoy strong support from the urban middle class and from within Malaysia’s Chinese and Indian ethnic minorities, he concedes he faces a challenge to infiltrate the rural Malay heartland.

Almost 70 per cent of the population is Malay, most of them Muslim, and, unlike in 2018, the opposition is split, with ousted prime ministers Muhyiddin Yassin and Mahathir, at the ripe age of 97, fronting rival groups. Surveys suggest the nonagenarian is but a bit player this time. 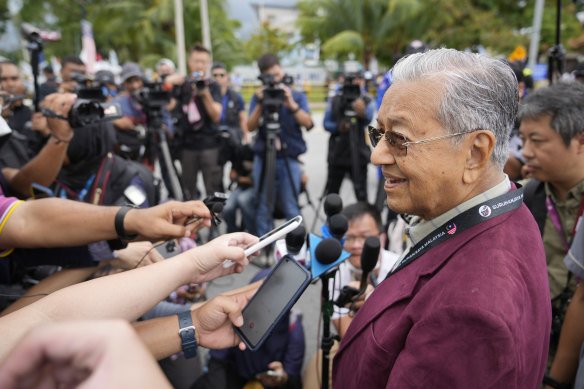 Former prime minister Mahathir Mohamad, 97, speaks to reporters in his electorate on the island of Langkawi on Saturday.Credit:AP

In an effort to improve Harapan’s chances, Anwar has given up his stronghold in Port Dickson, south of Kuala Lumpur, to contest a seat beneath the limestone peaks of suburban Ipoh in north-western Perak state, a key election battleground.

It’s a risky move that could end his career but, given the fractured state of Malaysian politics, with backing for UNMO also not what it once was, a significant gain there may be vital.

“This is a genuinely unpredictable situation,” said Dr Amrita Malhi from Flinders and The Australian National universities. “There are more candidates than ever before, more independents, more voters, new dynamics inside and between the various competing parties and coalitions, and less coherence in terms of policy choices.”

With none of the three main coalitions appearing likely to reach the 112 seats needed for an outright majority on their own, post-election horse-trading may well be needed to form government and there has even been talk that Anwar and Harapan could end up in an alliance with Barisan Nasional. 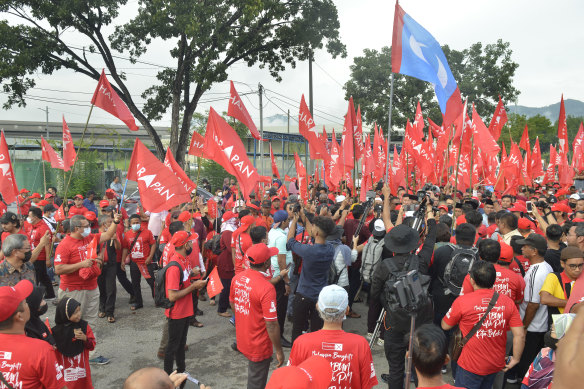 Supporters of Anwar and his Pakatan Harapan coalition gather at a campaign event on Saturday.Credit:AP

Unsurprisingly, it’s a compromise he wants to avoid making.

“Of course, people say realistically I must be open to the idea. In democracies, [that’s what] coalition governments are about,” he said.

“So, my appeal to the voters is, ‘Give us a chance to decide on your behalf, instead of being given an ultimatum by these groups.’ ”

Working once more with Mahathir, who has offered to link up with Anwar again, is also an unwanted outcome.

Anwar said he had been polite in not discounting the possibility but told the Herald and The Age, “This guy reneged on his commitments too many times.”

As he rounds the nation, his team handing out umbrellas in Harapan red in addition to the customary T-shirts, he is making clear exactly what is at stake.

“Malaysia is at risk of being perceived as a fragmented, corrupt, insignificant and even racist country, when not the butt of global embarrassment,” he wrote in a new book called SCRIPT – For a Better Malaysia.

Yet, while he is 22 years younger than Mahathir, who became prime minister for a second time at the age of 92, time may be running out for Anwar to deliver the changes to Malaysia that he seeks.

“This is the last chance for Anwar for a host of reasons,” said Professor James Chin of the University of Tasmania.

“Another reason is he’s got a fairly popular and competent deputy, Rafizi Ramli, so, if he can’t make it this time, Rafizi will step up and push him out.”

Malhi, however, warns not to count Anwar out.

“There’s a 97-year-old running, after all, and candidates running with legal cases against them whose status is unresolved,” she said. “Their careers aren’t over, so it’s probably not wise to write Anwar off either.”