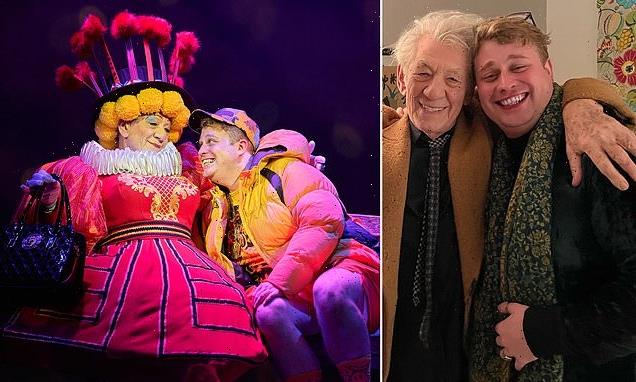 Sir Ian McKellen, 83 strikes up off-stage friendship with actor who plays his son in panto: Mother Goose star, 29, reveals he spent NYE with ‘new love of my life’ on Twitter

Sir Ian McKellen has struck up a warm off-stage relationship with the actor playing his son in panto.

The star saw in the New Year with Oscar Conlon-Morrey, who is 54 years his junior.

The younger actor is appearing alongside the six-time Olivier Award-winner in the much-lauded Mother Goose, running in London. 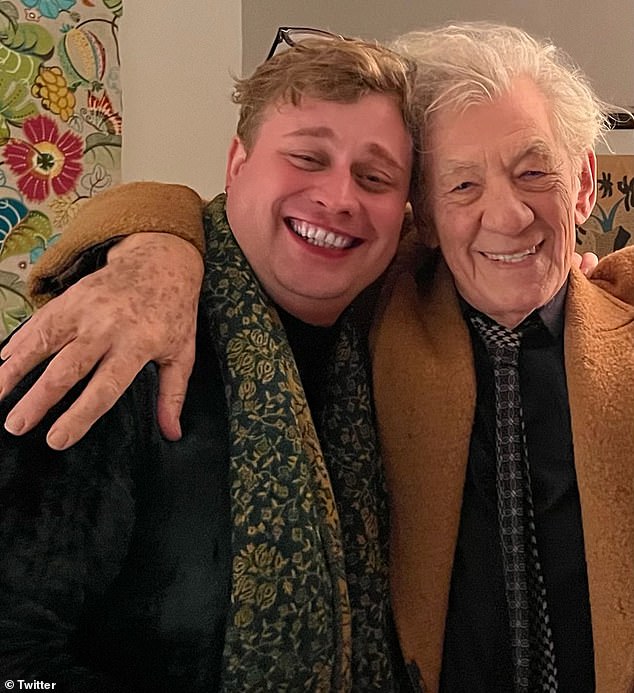 Sir Ian McKellen (right) has struck up a warm off-stage relationship with the actor playing his son in panto. The star saw in the New Year with Oscar Conlon-Morrey (left). The pair are pictured together during their New Year celebrations 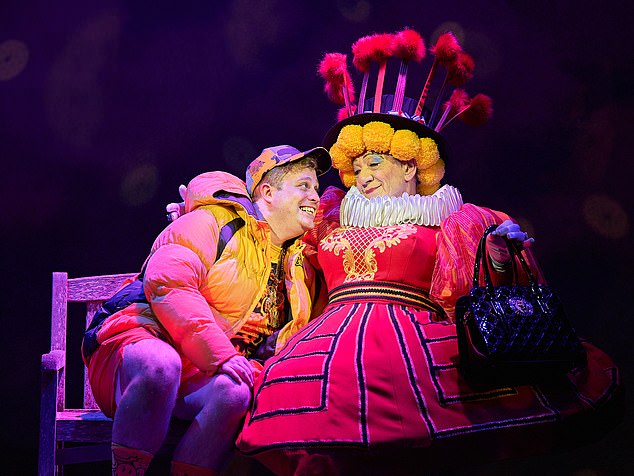 Oscar Conlon-Morrey (left) is appearing alongside six-time Olivier Award-winner Sir Ian McKellen (right) in the much-lauded Mother Goose, running in London. The actors are pictured during the show

Conlon-Morrey announced to his 15,500 followers on Twitter yesterday: ‘Happy New Year! I saw in 2023 at the house of the new love of my life.’

He finished the message with a heart emoji.

The post was accompanied by a picture of the two men smiling broadly at the camera and with their arms around each other’s shoulders.

It is not clear whether the relationship is platonic or romantic.

Friends of Conlon-Morrey have been offering their congratulations.

Earlier this month, he complained about being single on Twitter, writing: ‘I need a boyfriend, purely so he can cuddle me and bring me Baileys whilst I sob uncontrollably at Call The Midwife.’

He said in another post: ‘A friend just said that if I want to meet someone I need to go clubbing!

‘I fear this won’t bode well, if in year[s] to come the man I meet wants to get wrecked on a Saturday night and dance to pop music and all I want is to sit on the sofa watching the Cash in the Attic omnibus.’ 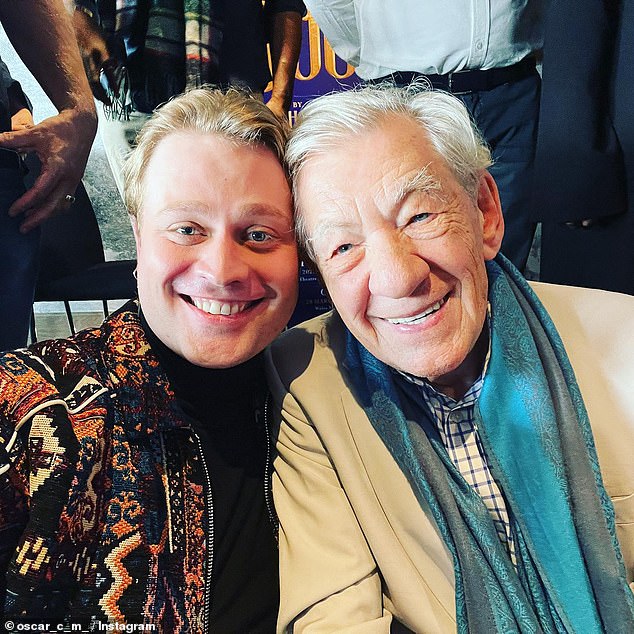 Conlon-Morrey (pictured with Sir Ian on his right) announced to his 15,500 followers on Twitter yesterday that the pair rang in the new year together 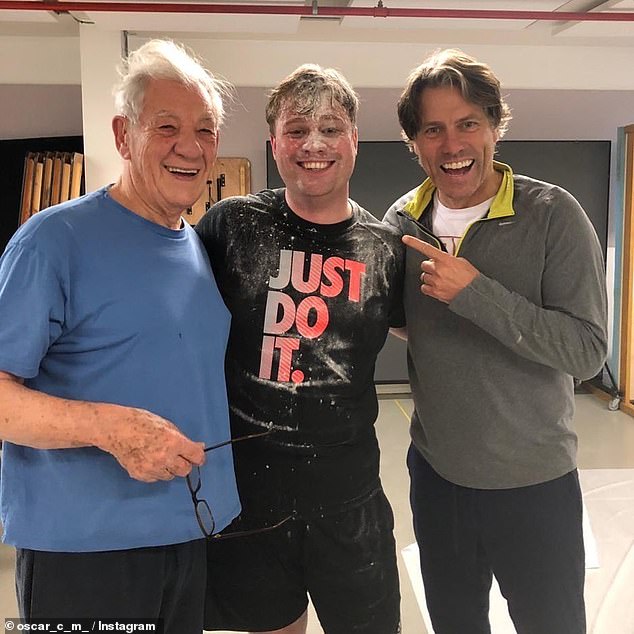 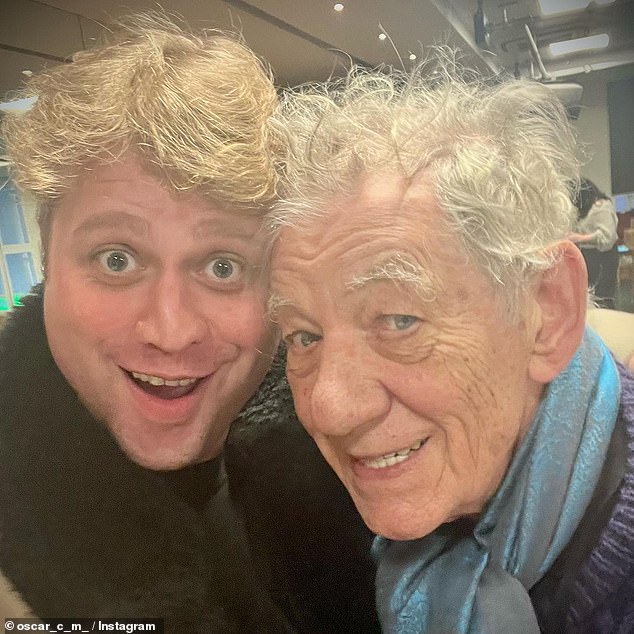 It is not clear whether Conlon-Morrey and Sir Ian’s relationship is platonic or romantic. The pair are pictured together

Sir Ian came out as gay in 1988 and is a distinguished advocate and campaigner for LGBTQ rights.

His first partner was history teacher Brian Taylor, who he was with from 1964 to 1972. In 1978 he started dating Sean Mathias, an actor and director, and they were in a relationship until 1988.

He was in Laurence Olivier’s company at the Old Vic but is perhaps now best known for playing Gandalf in the Lord of the Rings and Hobbit films, for which he was Oscar-nominated.

He is also well known for his role as Magneto in the X-Men films.

Sir Ian is a renowned Shakespearean actor and played Hamlet in an ‘age-blind’ production of the play last year. 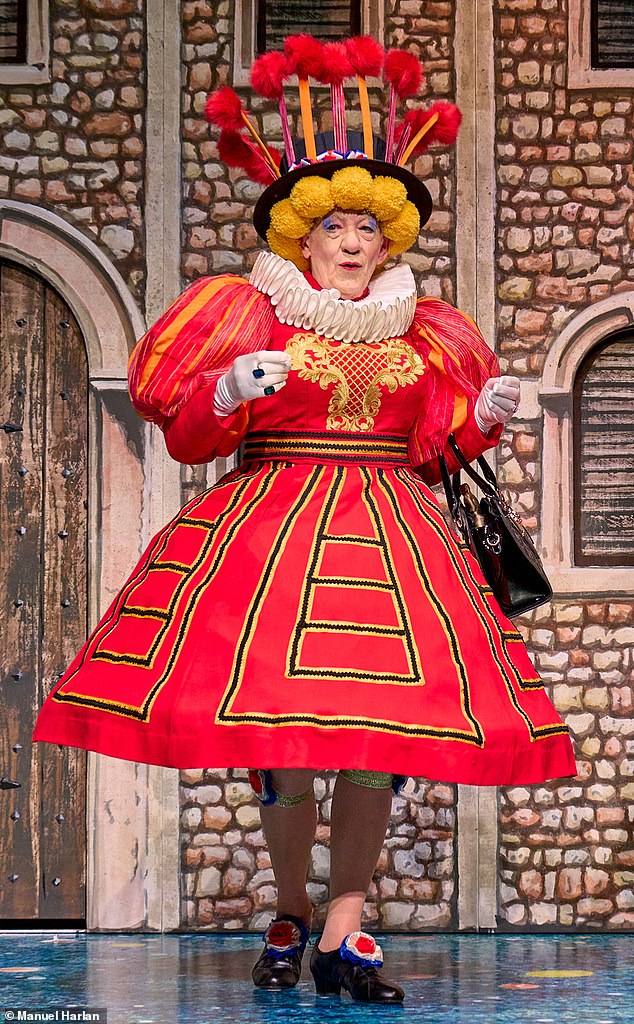 His turn as Mother Goose has also won acclaim. One critic wrote: ‘Ian McKellen… darts about in gorgeous frocks in a way that suggests he’s waited a lifetime for this role.

‘He probably has: despite being a giant of the stage, playing Lear and Hamlet in the past few years, McKellen has done relatively few pantomimes, and none for over 15 years.

‘It’s joyous seeing him have so much fun; his energy seems derived from the audience, working like some kind of endothermic reaction.’

Another noted: ‘The old ham is fantastic. Hair full of rollers, a voice of rattling thunder, chunky pearls, and a bosom that could interfere with tides.’

The panto is at the Duke of York’s theatre in London’s West End until the end of January and will then go on tour across the UK.

Representatives for Sir Ian and Conlon-Morrey were approached for comment.