When 23-year-old Yasmin Poole bumped into 59-year-old Anthony Albanese at the tea urns, the prime minister did something young people may not be accustomed to when meeting elder statesmen. 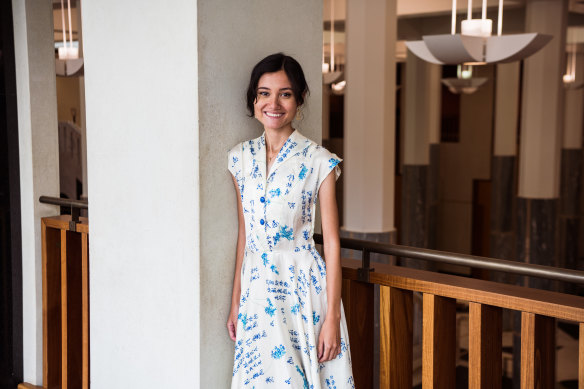 Yasmin Poole was one of thousands of women at the March 4 Justice who the then prime minister, Scott Morrison, did not wish to meet. As the youngest person at the Jobs and Skills summit, she said the event “feels like optimism”.Credit:James Brickwood

The youngest participant at this week’s Jobs and Skills summit doesn’t doubt what she had to say about gender equality was worth hearing.

But last time she tried to tell those in power, in the crowd of thousands of women who rallied at Parliament House in 2021’s March 4 Justice, the then leaders did not want to engage.

“At the March 4 Justice [when then prime minister Scott Morrison refused to speak with those at the rally] it was like we were shouting from the outside in,” Poole said.

Morrison later said in parliament that the protesters were fortunate not to be “met with bullets” as happens in other countries. 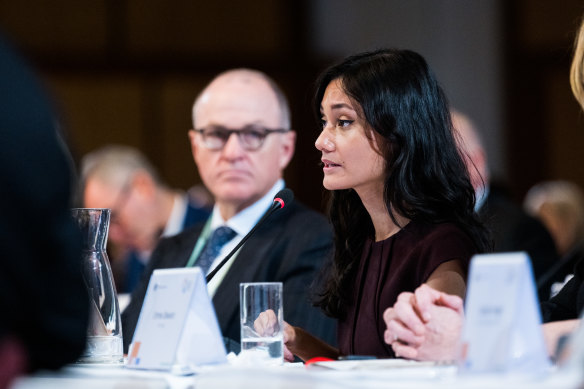 Yasmine Poole speaking at the Jobs and Skills summit.Credit:James Brickwood

“This [jobs summit] was something that felt completely different from the last two years,” said Poole, whose advocacy around social justice came in part from her experience of living in financial hardship as a child.

“I said to [Albanese], ‘I’ve heard gender mentioned on every, single panel … It was powerful to hear words like ‘gender lens’, ‘disability’ and ‘First Nations’ used frequently; it brings a bit of comfort, like our [young people’s] voices have started to be heard.

“It feels like optimism, but also inclusion: not just something tokenistic, but a willingness to change deeper structure that often drives inequality.

“Everyone in the room has been saying it’s great to hear gender being mentioned so often. We no longer have to prove the problems exist, we just get to talk about how to address them. ”

Poole, a student of law and international relations and also inaugural chair of the Victorian government’s youth congress policy advisory group, told the summit that to ensure equal opportunities for women, data must be gathered on how “intersectional” women are faring (including women of colour, culturally and linguistically diverse women, those with disabilities, who are Indigenous or who are LGBTIQ).

“It’s hard to write recommendations around diverse women without that being collected,” she said.

”I’m calling for that to be collected and for cultural change around sexual harassment and abuse – a conversation led last year largely by young women, and I’m reiterating the importance of having young women at the table: the Chanel Contos petition is a perfect example of how young women have much valuable to say around this.“

Contos started the successful petition for sexual consent education as part of the Australian school curriculum, after hearing hundreds of testimonies of sexual assault or rape of schools and university students by peers.

Poole said having come from a low-income background and seen the barriers “wealthier families wouldn’t ever have to face”, she saw the summit as a chance to add her experience to the national discussion around equalising women’s pay.

“My mum [who is from Singapore] is a big source of strength to me. Seeing how she was treated when I was growing up, the racism and sexism, is something that makes me show up, even when it’s hard.”

But not all youth advocates were satisfied with the attendance list or agenda at the summit.

Conor Pall, 19, an advocate for young people who have lived with family violence, said there were not enough young voices from the regions invited to the “golden ticket” event. 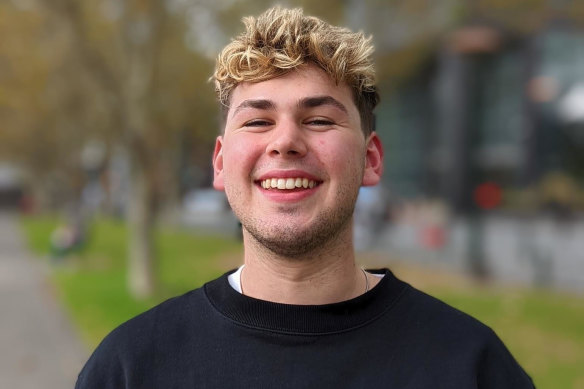 “I couldn’t find one person there under the age of 23,” he said.

As a student of social work who intends to seek a career in public policy, he said regional young people felt “left out of all decision-making”.

“Young people are often referred to as the leaders of tomorrow, but we’re not even brought to the decision-making table,” he said.

Pall works at the Youth Affairs Council of Victoria as a young peer facilitator in Sunraysia and is the 2022 Victorian Young Achiever in connecting communities. He said that 69,000 young people are on JobKeeper was reason to invite more of them into discussions about how to build their economic security.

Ahmed Hassan, 26, the executive director of the multicultural group Youth Activating Youth, said he was “optimistic” about what the summit would yield for young people, so long as it produced action.

“The job summit is a fantastic start. It’s brought together all types of people and I think we just need some practical solutions to come out of that, things that we can measure,” he said.

Insecure work, underemployment and long-term unemployment are the biggest issues young people faced, he said, and a greater focus on finding jobs for young people who had exited the criminal justice system was needed.

“We think that there’s some really good outcomes [from the summit] already. There are additional TAFE places, fee-free TAFE places, and there are also changes, potentially, to the workforce-bargaining system which are really going to impact young people and support them to get better, higher-paid jobs.”