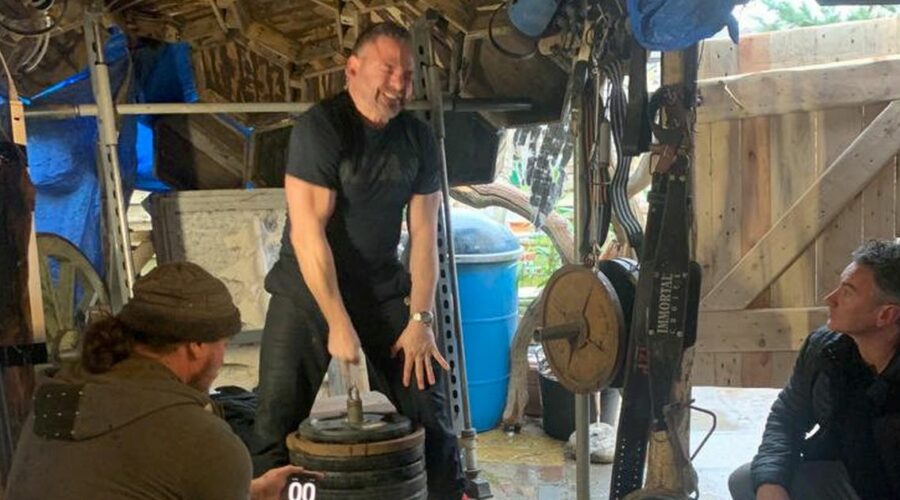 A Brit has smashed a Guinness World Record that had stood for a decade after deadlifting nearly 130kg with just one finger, and he's got his sights set on 150kg.

Steve Keeler, 48, a retail manager, from Shepherdswell near Dover in Kent, managed to lift 129.5kg with just his middle finger for eight seconds, beating the previous record of 121.7kg.

Mr Keeler only came up with the idea when he was “playing around” with some weights with a pal in a home gym he had built during lockdown.

He explained: "In lockdown we were doing some gym work and after messing about with some of the weights I moved a weight that was quite heavy with one finger.

"We set challenges to see how heavy we could get and I wondered what the world record was.

"It wasn't much more than what I'd lifted."

Mr Keeler began training for the challenge and managed to lift 7.8kg heavier than the previous record, which had stood for 10 years and was held by Armenian Benik Israyelyan.

His strength training consisted of lifting six iron weight discs at the same time: a smaller one measuring roughly 10 kg, one 20 kg, three measuring a little over 25 kg each and one measuring 26 kg.

He said: "It’s incredibly painful, but my fingers are strong and I am proud of my lift.

“It's not the weight that's the hard thing to lift, it's getting through the pain and if you can do that then you're fine.

"It's such a random record but it is mine. It's just something I thought I'd have a bit of fun with and nothing to take too seriously.

"It was a lockdown project, something to tell the grandkids.

Mr Keeler might try and beat his current record in future, saying “I think I’ve got 150kg in me.”

The key rules to set the record were that the weight had to be lifted from the ground by at least four inches, by one finger, for over five seconds.

Mr Keeler completed the challenge on February 13 and received confirmation that he was the new Guinness World Records holder while on holiday in Greece earlier this month.