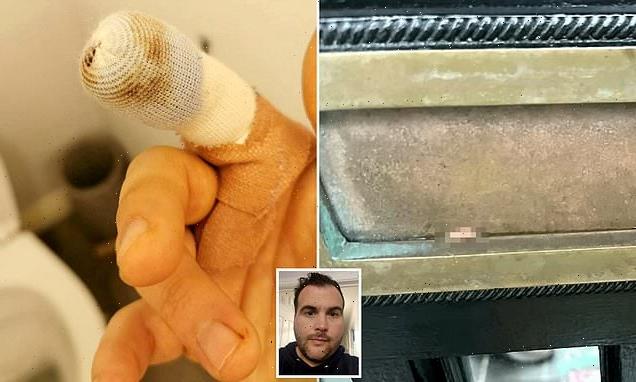 An Amazon driver left the tip of his finger in a letterbox – after ripping it off while delivering a parcel.

The dad-of-three, from Plymouth, Devon, had to have a partial amputation and has not worked since.

He said: ‘I was only posting an A4 parcel through the letterbox. But as the flap snapped down it caught my finger. 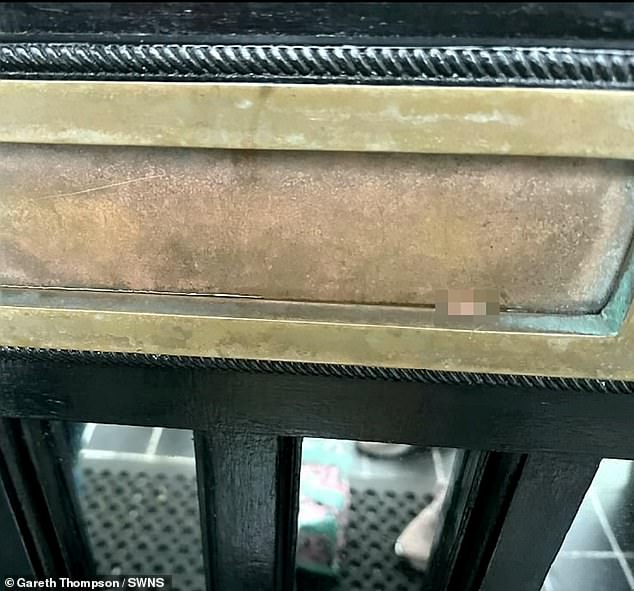 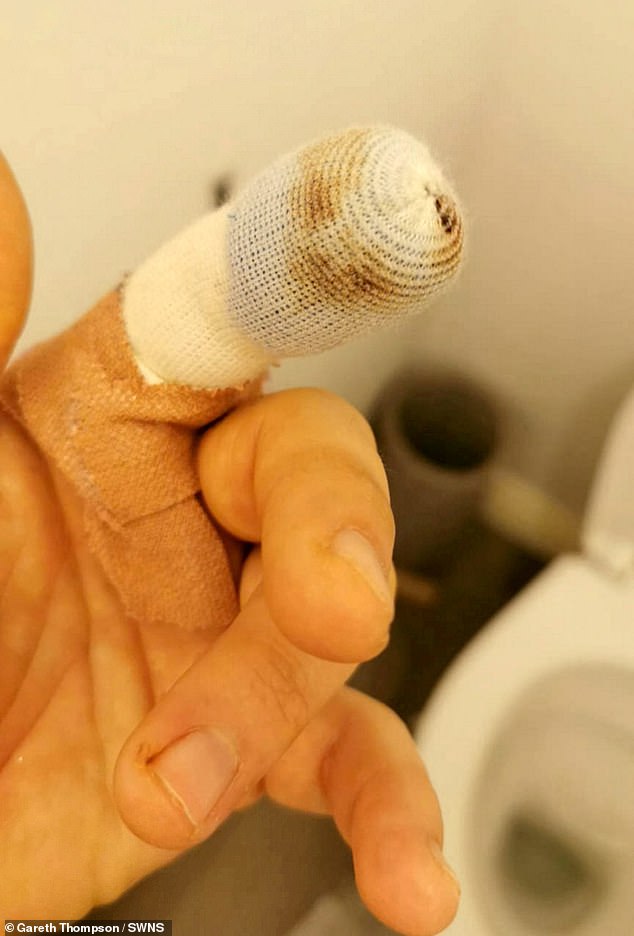 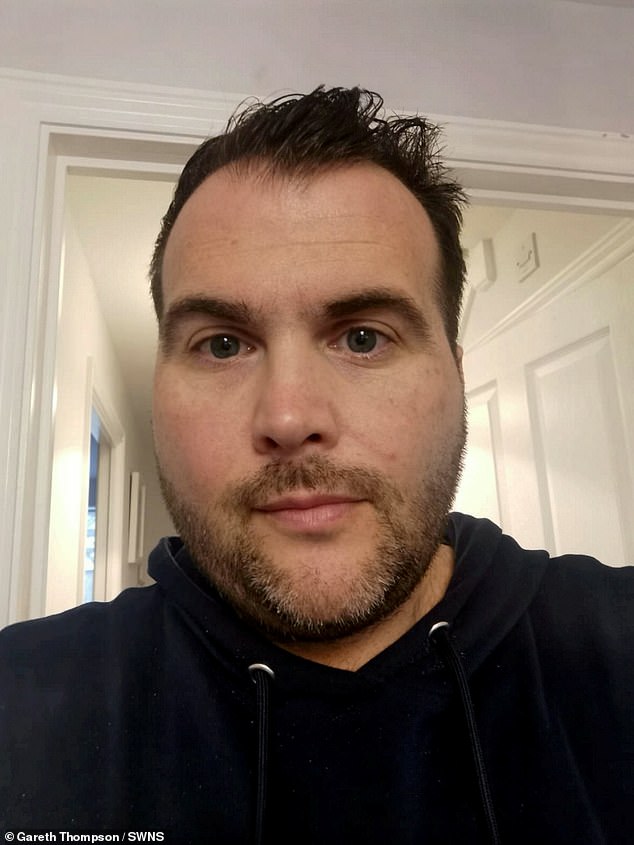 Gareth Thompson, 40, from Plymouth, Devon, was forced to have his finger partially amputated after it was caught in a letterbox

‘I ripped my hand away and left the tip of my finger in the customer’s door – which probably gave them the fright of their life!’

He gave up his 20-year career as an electrical engineer to try and spend more time with his family.

But the new job take a gruesome turn on December 13, when Mr Thompson posted a parcel in his home city.

He instinctively pulled his hand away after getting it stuck, but the sharp flap severed his the top part of his index finger clean off.

Mr Thompson was left with the bone sticking out and claims he was losing a dangerous amount of blood. 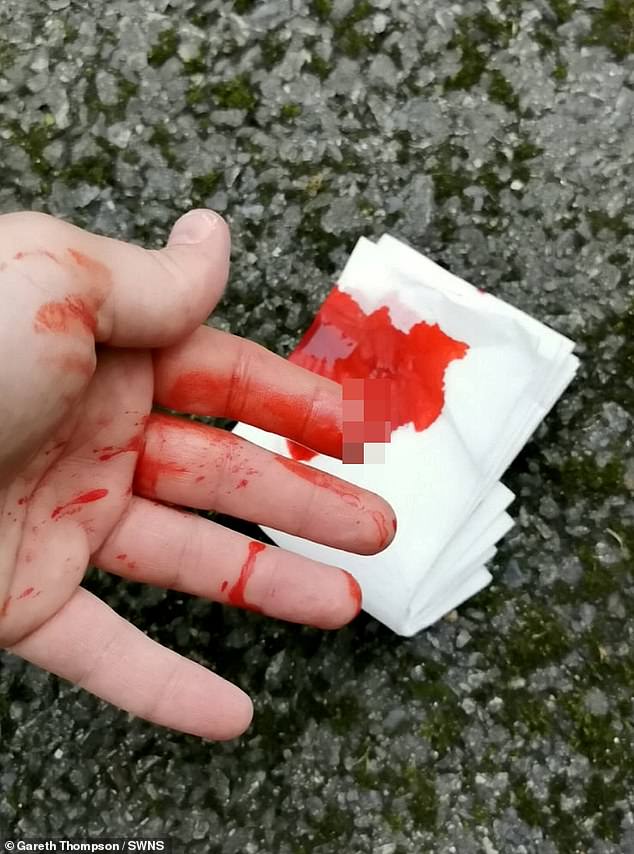 Mr Thompson said: ”It was horrible to look at – I could see my bone sticking right out. I was losing loads of blood and needed something to stop the bleeding’

He said: ‘Everything happened so fast. I felt a sharp pain on the tip of my finger as the flap came down, and when I looked at my hand, I was in shock.

‘It was horrible to look at – I could see my bone sticking right out.

‘I was losing loads of blood and needed something to stop the bleeding so I walked to a pub a few doors down to get some tissue paper.

‘In the moment I forgot to take the bit of my finger lodged in the letter box, and I feel sorry for whoever’s house it was.

‘When they look for their parcel, they’ll find part of my finger along with it!’

Mr Thompson called his line manager to inform them of his accident, but claims at first they didn’t believe him.

Once they were convinced he was telling the truth, Mr Thompson alleges he was instructed to drop the van off back at the depot before going to hospital.

He eventually saw a plastic surgeon at Derriford Hospital later the same day, who booked him in for a partial finger amputation. 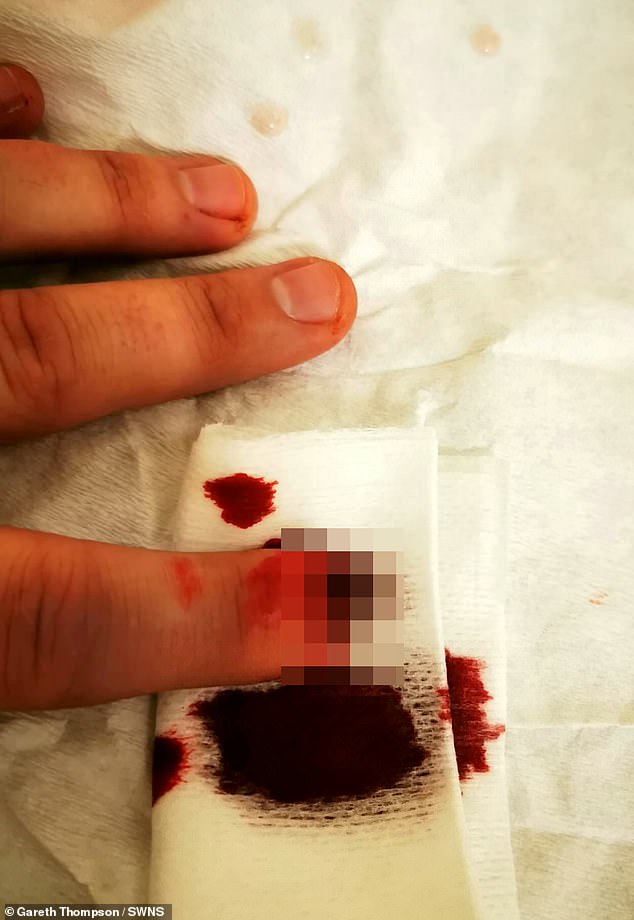 In the shock of the moment, Mr Thompson said he forgot to retrieve the fingertip lodged in the letterbox (Pictured: the damaged finger) 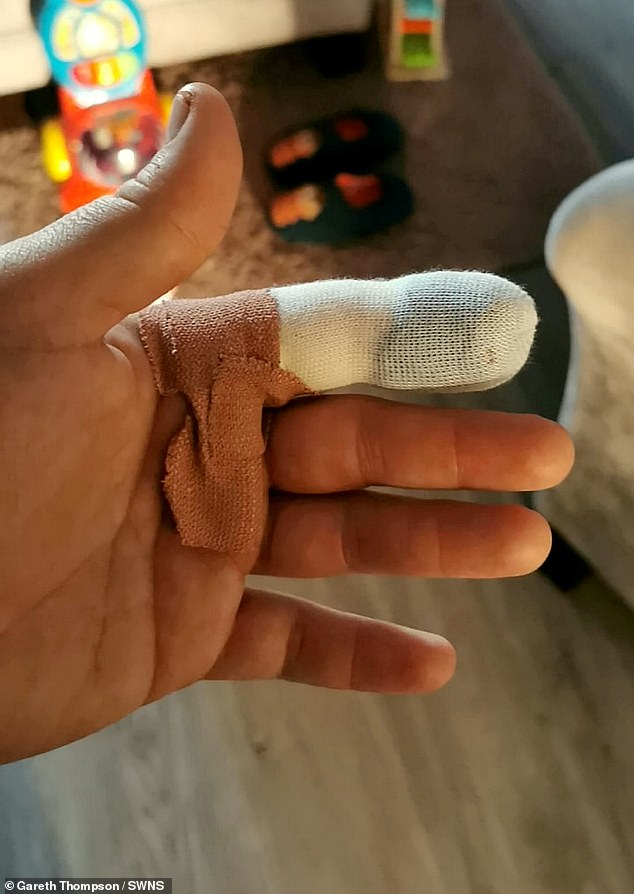 Mr Thompson has been off work since, and claims he has not been contacted by his employer.

He said: ‘SCR Logistics’ reaction to what had happened was pretty disheartening.

‘I had to send them photos of what had happened because they didn’t believe I was telling the truth and then they wouldn’t allow me to drive the van to hospital.

‘That meant I had to wait at the yard for my wife to leave work and give me a lift – all while my finger was spewing blood.

‘When I got to hospital they took one look at the injury and moved me straight to the front of the queue.

‘I saw a surgeon and was given local anesthetic, and then booked in for a partial amputation the next day.

‘I am yet to return to work, but still haven’t heard at all from either Amazon or SCR – not even a text to ask if I’m okay.’

An Amazon spokesperson said: ‘We’re looking into this with the delivery service provider, and we wish Gareth a speedy recovery.’

An SCR Logistics spokesperson said: ‘We are working very closely with Amazon regarding this.

‘We wish Gareth a smooth and speedy recovery. He still remains part of our team.’