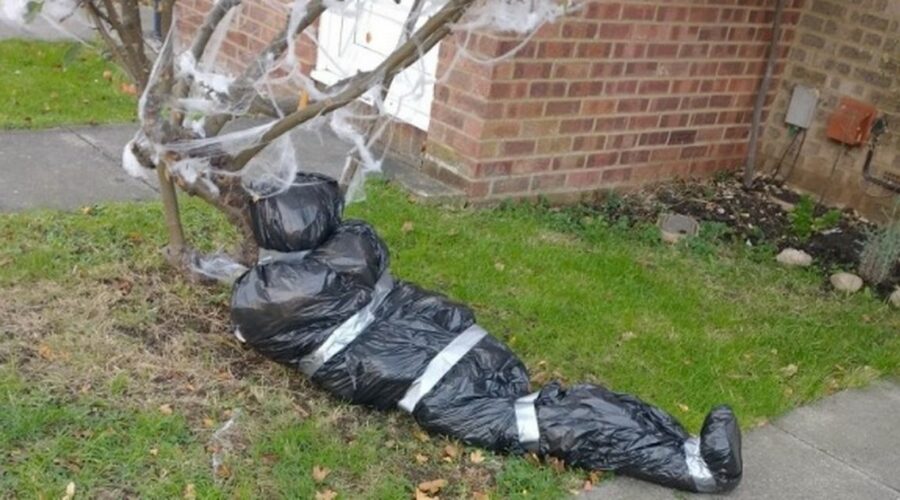 Homes up and down the country will soon be decked out for Halloween and, for many trick or treaters, it's a case of the spookier the better.

But does displaying a body bag in your front garden represent a line that should never be crossed – even on October 31?

One poster on Reddit, called PeachInABowl, clearly thinks that's the case but will have perhaps been surprised by the volume of comments that disagreed.

Having uploaded a photograph of the supposedly offensive prop, the poster asked: "Can we all agree that this Halloween 'decoration' goes too far?"

The image and question were also reposted on the r/CasualUK Reddit site, which provides non-political news, commentary and discussion to its 1.3million members.

More than 2,300 comments were swiftly added below – the vast majority arguing that it did not go "too far".

Some did concede that it was probably not the greatest idea in a neighbourhood where somebody might have actually been murdered.

It's unlikely to ever go down well, for example, in Gloucester's Cromwell Street where serial killers Fred and Rosemary West buried nine bodies at the notorious number 25.

And one person, in agreement, argued: "I'm just sitting here waiting for the inevitable discovery of a real body put on display like this, one Halloween. This is definitely taking it too far.

"Keep this level of decoration indoors and at haunted house theme parks. Trying to recreate murder scenes on your street is just weird."

Another felt it was "absolutely disgusting", while a third reasoned: "I don’t think it’s in the best taste, but it’s not horrendous. The fact it’s been put out two weeks before Halloween is a bit odd, but any excuse to celebrate I suppose."

Many argued that it didn't go "too far", however, suggesting inventive ways to be even more ghoulish.

One person advised: "If you want to freak them out, add an extra each night."

Another said: "Best idea would be leave it there for a couple of weeks then, on the night on Halloween, dress up exactly the same and lay in its place and wriggle about or jump up as people walk by. False sense of security."

A like-minded third poster was clearly a fan too, adding: "I did that over several Halloweens. We almost always had the same decorations, a hanged man, scarecrow etc, always props until Halloween night.

"Then I would swap myself for one of the humanoids, stay still until someone came by and scare the daylights out of them. Don't do it for every group to keep them guessing. Of course, never scaring the young'uns, only traumatise the teens."