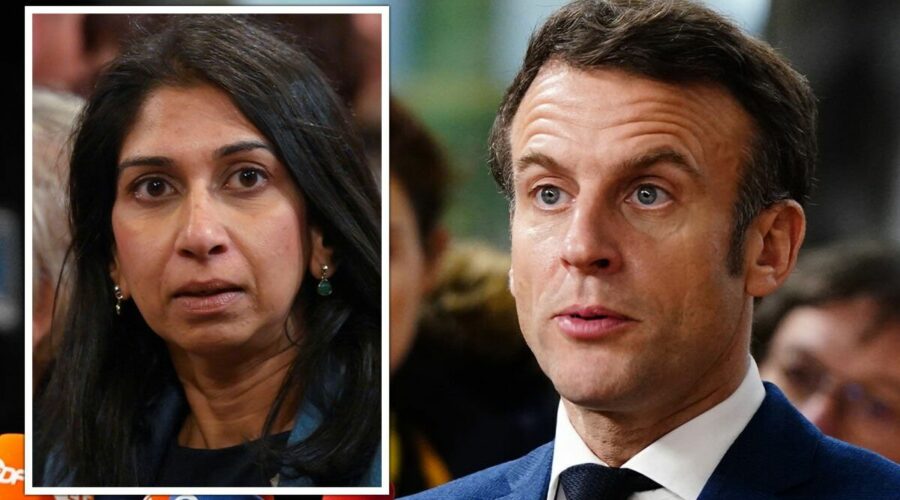 Home Secretary Suella Braverman has suffered another setback in her bid to stem the rise of dangerous Channel crossings in small boats. Her French counterpart has warned the current UK-France migration deal is “incomplete”, as people smugglers are still able to operate in neighbouring EU countries like Belgium and the Netherlands. To prevent crossings from these European countries, Gérald Darmanin has called on the Home Secretary to secure border deals with Belgium and the Netherlands as well as France.

Speaking to the Financial Times, the French Interior Minister said such steps would complete the UK-France migrant pact signed in November. In its revised form, the agreement says the UK will increase payments to France by about 15 percent to £63million a year to fund additional officers patrolling French beaches. The number of officers will rise from 200 to 300 under the new pact.

Mr Darmanin said: “The accord we’ve signed is a good one that will allow us to boost patrols and better coordinate on combating people’s smugglers, but it is incomplete.”

His call comes after four people died last week after a dinghy carrying migrants capsized in freezing waters of the English Channel in the early hours of Wednesday.

More than 40 people were rescued after lifeboats, helicopters and rescue teams working with the French and British navies responded to the emergency concerning what the UK government described as “a small migrant boat in distress”.

“At 0305 (GMT) today, authorities were alerted to an incident in the Channel concerning a migrant small boat in distress,” a British government spokesperson said in a statement.

“After a coordinated search and rescue operation led by HM Coastguard, it is with regret that there have been four confirmed deaths as a result of this incident.” Investigations were underway, the statement added.

Home Secretary Suella Braverman told parliament the tragedy was a “sobering reminder” of why dangerous journeys across the Channel had to end.

Earlier on Wednesday she said in a tweet that she was “aware of a distressing incident in the Channel” and was waiting for more information. “My heartfelt thoughts are with all those involved,” she added.

Rishi Sunak’s Government has grappled with surging numbers of Channel crossings this year, with 45,223 entries recorded so far this year. This compares with more than 28,000 who crossed in small boats last year.

Last week, the Prime Minister pledged to clear a huge backlog of asylum-seeker applications with more resources and announced new measures aimed at curbing the number of migrants reaching the UK by crossing the Channel for next year.

Among the measures on the table is more funding for the NCA – Britain’s equivalent of the FBI – to tackle organised immigration crime in Europe.

In one incident last year, 27 people drowned during a perilous journey despite having called British and French coastguards for help. Shortly after that incident, Mr Darmanin had already warned a new asylum system was needed between Britain and the EU to establish legal routes and an organised system of returns.

“We would absolutely agree to take back some of the migrants heading for Britain, as long as it was not just France doing so,” the French Interior Minister said at the time.

Since post-Brexit immigration rules came into force, successive UK Governments have failed to replace the EU’s Dublin Convention, which allows EU countries to send migrants back to the first EU country they step into.

“Enough is enough” and that the system is “not fair”, he told the Commons, as he announced a flurry of new immigration rules.

Among them is a new small boats operational command – with an extra 700 staff from Border Force – to police Channel crossings, an increase in raids of illegal business premises by more than 50 percent, no more hotels to house asylum seekers, doubling the number of asylum caseworkers to triple productivity and changing Albania’s status to “safe country” in a bid to reduce the backlog and reject thousands of applications.