Four of Australia’s largest energy companies have been placed on a “watch list” by HESTA, as the health industry superannuation fund chases the firms for firmer guidance on their stated plans to meet the goals set by the Paris Agreement.

The $68 billion super fund announced on Tuesday that it has written to the four energy companies it holds small stakes in – AGL, Santos, Origin and Woodside – asking them to demonstrate how their climate strategies align to the goal of limiting global warming to 1.5 degrees. 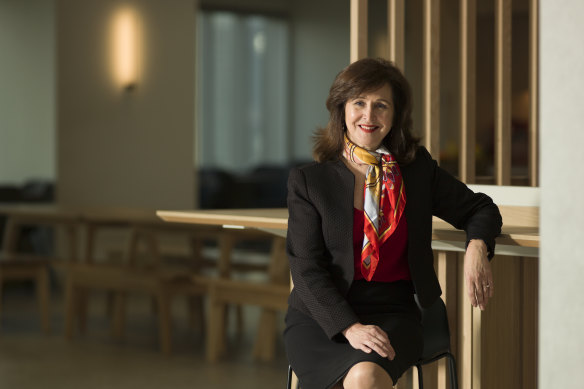 “In a nutshell, we’re not clear how the companies’ climate strategies align with the 1.5 degree pathway, and we also want better clarity on how their future capital expenditure will support a transition to a low carbon economy,” HESTA chief executive Debby Blakey told this masthead.

“We want to see how they believe their future capital will support such a transition to low carbon.”

The move comes after HESTA conducted an annual assessment of the climate change progress of companies in their portfolio that are contributors to emissions. It found the four companies faced “significant decarbonisation challenges, requiring a major shift in their strategies to offer low carbon energy products”.

AGL, Santos, Woodside and Origin will now be subject to closer engagement and monitoring by HESTA, and where the fund believes there is inadequate evidence of progress to address climate risks, they will consider using escalation tactics, such as voting on director elections or climate resolutions, or filing shareholder resolutions, Blakey said.

The companies have been asked by HESTA to show how their future expenditure will support a transition to a low-carbon economy.

The four companies confirmed they had received the letter, and indicated they would respond by the end of the month.

An AGL spokesman said they were proud of their commitment to decarbonisation, which included a goal of net-zero emissions by 2050 and the bringing forward of the closure of our coal operations. “As previously announced, AGL’s decarbonisation pathway will be reviewed as part of the review of strategic direction that is currently underway,” he said.

“We acknowledge that the energy transition is a complex and ongoing process. Our shareholders’ views are important to us and will continue to inform our approach as it evolves,” she said.

A Santos spokeswoman said they had received HESTA’s letter on Friday, and are yet to respond. She said the company had committed to net-zero scope 1 and 2 emissions by 2040.

Origin released its first Climate Transition Action Plan several weeks ago, which a spokeswoman said showed a commitment to medium-term emissions intensity target and long-term net-zero emissions ambition were consistent with the goals of the Paris Agreement.

“We continue to engage with shareholders and other stakeholders on our refreshed strategy and ambition to decarbonise Origin, and intend to report on our progress against our plan,” she said.

HESTA also announced on Tuesday that it would lift its interim target, from 33 per cent to 55 per cent, for reduction in normalised emissions by 2030, and has committed to investing 10 per cent of its portfolio in climate solutions such as renewable energy and sustainable property by 2030.

The super fund has more than 930,000 members, of which 80 per cent are women, who work in health and community services.

The fund has positioned itself as a leader of responsible and sustainable investing in Australia, and has a policy of active ownership – this means rather than divest in fossil-fuel companies, it tries to exercise its rights as shareholders to influence the activities or behaviour of companies it owns.

Earlier this year, HESTA used its small stake in AGL to side with tech billionaire Mike Cannon-Brookes and declared it planned to vote against the planned demerger of the energy company’s coal-fired power generation business, arguing the move would not help decarbonisation of the economy.

“[Active ownership] has been a core part of our investment approach for a very long time,” said Blakey.

“These particular companies have such an important role to play in mitigating climate risk and reducing Australia’s emissions. And that’s why we would see a far more effective approach being engaging with these companies and seeking for them to demonstrate their business strategies that are aligned with a 1.5 degree transition pathway.”

However, the company has also faced criticism for continuing to invest in companies pushing for new fossil fuels, with activist group Environmental Defenders Office, on behalf of two HESTA fund members, accusing the fund of greenwashing over its climate promises.