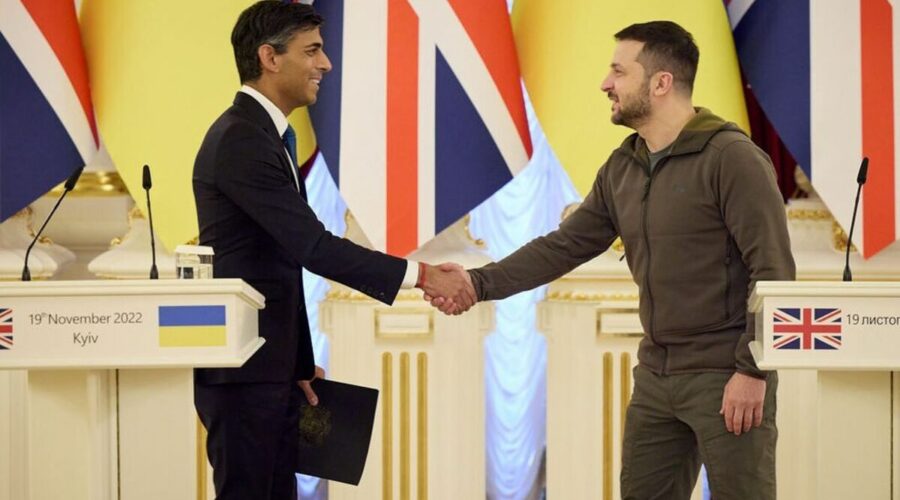 Volodymyr Zelensky thanks Americans in speech to US Congress

Ukrainian President Volodymyr Zelensky has shared a warm festive message with the UK as he sent Christmas wishes ahead of December 25. Mr Zelensky’s response came after UK Prime Minister Rishi Sunak tweeted a short video, with the message: “This Christmas, we’re with you Ukraine.”

“We feel your support. We feel the light and the warmth of your hearts.

“Thus together, we will defeat evil and restore peace in Ukraine, Europe, and the world.

The UK Government, including 2022’s three Prime Ministers – Boris Johnson, Liz Truss and Mr Sunak – have been at the forefront of the world’s fight against Russia.

Mr Johnson, when in power, took a stand against Russia and offered support to Ukraine.

“We anticipate a further 10,000 cold weather kits will be delivered by Christmas.”

He continued: “Our Armed Forces are doing everything possible to develop the battle skills of Ukrainian men and women.

“Having put almost 10,000 through their paces in the UK in 2022, my ambition is for our Armed Forces – alongside our allies – to at least double the number trained in 2023.

“I would like to place on record my thanks to Canada, Denmark, Finland, Sweden, Norway, New Zealand, Lithuania, the Netherlands and Australia for their contributions of troops to help train Ukrainians.”

During the visit, he confirmed that the UK will provide a major new package of air defence to help protect Ukrainian civilians and critical national infrastructure from an intense barrage of Russian strikes.