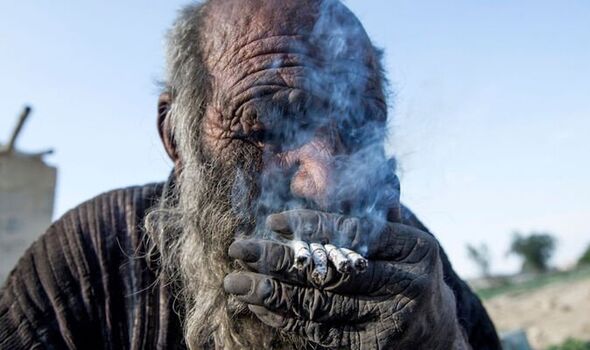 They say old habits die hard, and now the man dubbed the “world’s dirtiest” for his more than half century without washing and fondness for smoking has died, aged 94. Amou Haji, an Iranian hermit who feared bathing would make him ill, grew sick shortly after his first wash in decades and died on Sunday.

Mr Haji lived near the village of Dejgah in the southern Fars province of the Middle Eastern nation.

He earned his nickname for holding the record for the longest period spent without washing or using soap, with more than half a century unbathed.

After avoiding previous attempts by the nearby villagers to get him to wash, local news agency IRNA reported that a few months ago he finally gave in to their requests.

However, Mr Haji reportedly became ill shortly after his semicentennial soak, and died at the weekend.

Previous attempts to get him to wash – or drink sanitary water – made him sad, the news agency said.

He became the subject of curiosity in the latter part of his life, with videos surfacing online of his often strange behaviour – which he previously said came about due to a difficult childhood.

IRNA said his diet consisted of rotten meat and untreated water drunk from an old oil can.

Mr Haji was said to have never married and did not appear to have any family, preferring a solitary existence, but was treated with affection by villagers.

They constructed a rudimentary cinderblock and wood shack for him to sleep in, so that he did not have to rest in a hole in the ground.

However, in an interview with the Tehran Times in 2014, he said he lived between the hole and the shack.

He revealed at the time that his favourite meal was porcupine – a spiked rodent indigenous to the region.

Mr Haji also had a penchant for puffing on as many as five cigarettes at once, and was also known to smoke dung from a metal plumbing joint – both practices are advised against by healthcare professionals.

He told the local paper his unconventional lifestyle choices were due to “emotional setbacks” when he was younger.