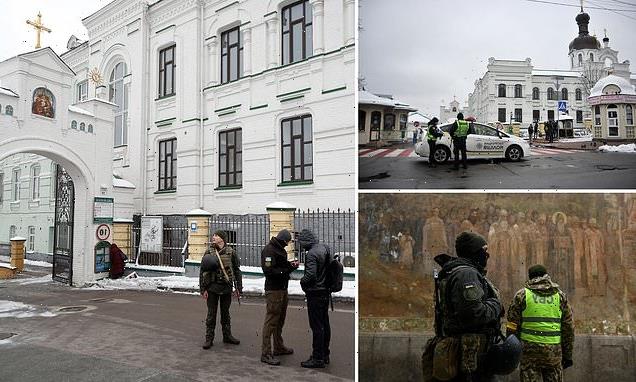 Ukraine’s security services have raided one of Kyiv’s most renowned Christian monasteries in the hunt for hidden weapons and Russian spies.

The search through the Pechersk Lavra, in Ukraine’s capital, comes amid rising suspicions of undercover Russian operations taking place inside the cathedrals and churches within the Holy site.

It has been deemed an unusual move which saw the security forces send counter-intelligence service, police officers and the country’s National Guard enter the monastery complex. 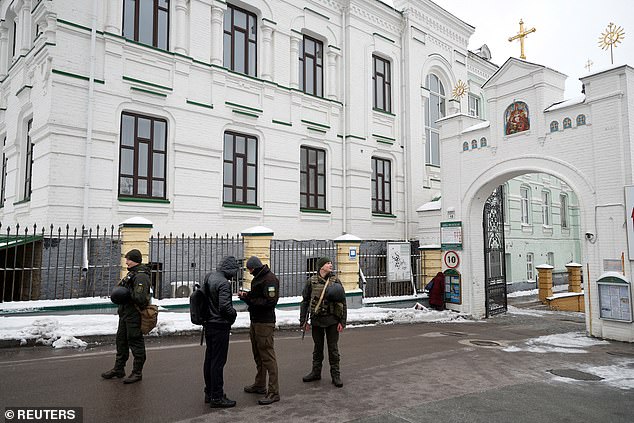 Members of the SBU, including the counter-intelligence service, police officers and the country’s National Guard were seen entering monasteries across the country. Here officers check the documents of a visitor to Kyiv’s Pechersk Lavra

It added that due to the nine-month Russian Invasion, the ‘risk of committing terrorist attacks, sabotage and hostage-taking’ has increased ‘especially in places with a large concentration of citizens’.

Officers were on the hunt for hidden weapons, potential intelligence or foreign citizens, it said.

The monastic complex, including its cathedral and churches, forms a UNESCO-listed World Heritage Site. It overlooks the Dniper River and has been a pilgrimage site for centuries. 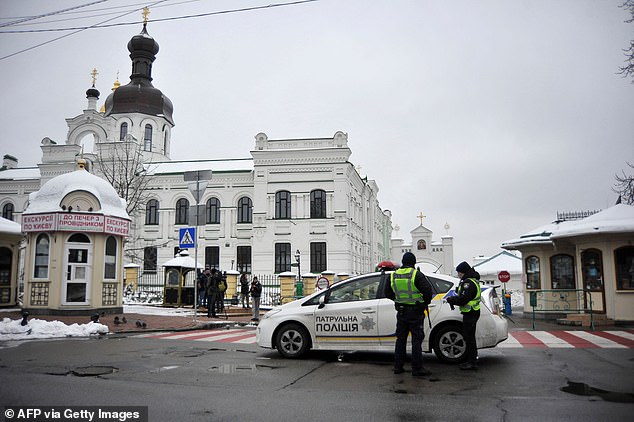 The security service said it was raiding the Holy site in search for spies, hidden weapons or potential foreign intelligence

The site remained open to those visitors who showed their IDs.

Two other sites, the Koretsky Holy Trinity monastery and the Sarny-Polisia monastery in the Rivne region, 150 miles west of Kyiv, were also searched.

The monasteries are all affiliated with the Moscow Patriarchate of the Ukranian Orthodox Church, which has been accused of collaborating with Russia since the war began, The Telegraph reports. 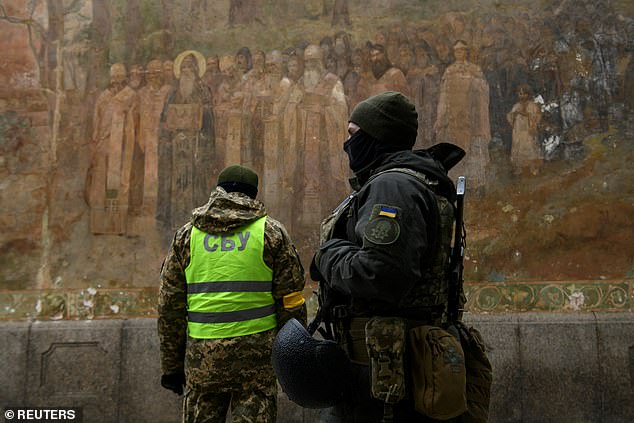 Officers standing next to the entrance of Pechersk Lavra in Kyiv. Two other sites, the Koretsky Holy Trinity monastery and the Sarny-Polisia monastery in the Rivne region, 150 miles west of Kyiv, were also searched

In Russia, Kremlin spokesman Dmitry Peskov accused Ukrainian authorities of ‘waging a war on the Russian Orthodox Church’ and said the search was ‘another link in the chain of these aggressive actions against Russian Orthodoxy’.

Moscow-based church authorities have repeatedly voiced support for the Kremlin’s invasion of Ukraine. Patriarch Kirill of Moscow, who heads the Russian Orthodox Church, previously described the war as a ‘metaphysical struggle’ between Moscow and the West. He condemned Tuesday’s search as ‘an act of intimidation.’

The operation follows a November 12 service at the Pechersk Lavra complex where a Ukrainian Orthodox priest was filmed talking about the ‘awakening’ of Russia.

The SBU said it was ‘looking into the details of the incident that happened in one of the temples of the Kyiv-Pechersk Lavra – where songs praising the “Russian world” were sung.’

Vasyl Maliuk, head of the SBU, said at the time: ‘Those who, in the conditions of a full-scale war unleashed by Russia against Ukraine, are waiting for the “awakening of Mother Rus” should understand that this harms the security and interests of Ukraine and our citizens. And we will not allow such manifestations.’