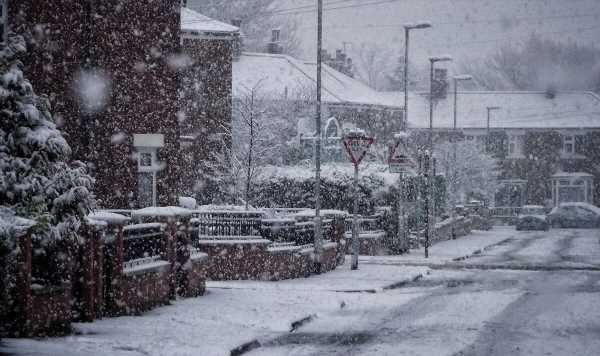 After weeks of mild autumn weather, Britain could see the first snow of the winter season in a matter of weeks, one forecaster is predicting. Many are expecting the warmer climes to give way to some heavy rain later this week.

For many, the warmer autumn temperatures the UK has seen in recent weeks have been welcomed, with households keeping their heating off for longer to spare them from astronomic energy bills.

But a cold front arriving from the Atlantic will bring rain, strong gusts and the potential for thunderstorms.

According to MetDesk, Sunday, November 13 will be the first day parts of Britain will see snowflakes falling.

Modelling by NetWeather suggests that there could be a risk of snow as early as today – though only a small chance, in a small area of central Scotland.

However, this will rise to 35 percent on Thursday in the same region, with the chance of snow across rural parts of Scotland over the weekend.

MetDesk is predicting, though, that snow could reach down into northern England.

Other forecasters are less sure. Stephen Dixon, a spokesperson for the Met Office, told Express.co.uk on Friday that there was no “signal beyond what we’d normally expect for this time of year in terms of snowfall”.

He added: “There will be an ongoing chance later in the month that any showers could fall as snow for a time in the north, with the high ground most likely to see the highest of any accumulations.”

The Met Office is predicting that temperatures will remain above average into November, after a series of blistering heatwaves this summer.

Jo Farrow, a senior forecaster at Netweather, said today that on Thursday “the North Atlantic will be dominated by ex-hurricane Martin.

“This large deep low pressure will edge towards Iceland and throw its weather fronts over Ireland and western Britain by Saturday.

“This will bring blustery rain and a push of milder air from the southwest.”

This evening, parts of Scotland will be braced for “a vicious tuck of westerly gales around the low centre this evening”, Ms Farrow said.

Moving into next week, the models are “very mobile and changeable”, but rain is predicted across the UK.

The Met Office’s long-range forecast says that though the weather will grow colder and rainier next week, temperatures will still be warmer than usual for this time of the year.

It said: “Changeable and unsettled conditions are likely to continue on Monday with bands of showers and rain interspersed with clearer periods, moving in a northeastwards direction across the country.

“Further into the week, unsettled conditions likely to remain particularly in the north and west, bringing showers or longer periods of rain. The southeast is likely to remain dry and brighter throughout the period.

“Strong winds are expected at times across much of the UK, especially in the west and north with a risk of gales.”

However, further into November, it predicts: “Unsettled conditions are expected to continue at first, bringing showers and longer spells of rain, heavy in places, across much of the UK.

“As we move towards mid-November, conditions are likely to settle, potentially bringing colder, drier weather especially for the north and west.

“Some rain can still be expected at times, especially in the south. An increasing chance of overnight frost and fog in places, as night temperatures start to fall.”