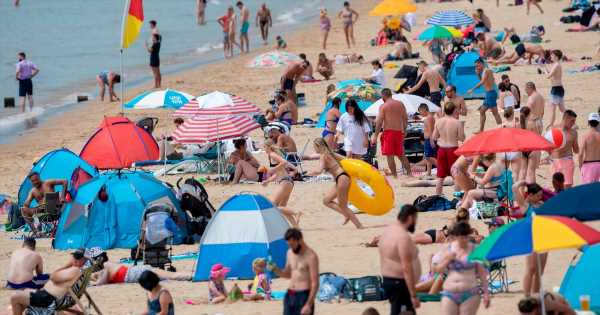 The government has warned people not to exercise too much during the peak of this weekend's heatwave to avoid falling ill from exhaustion.

Official advice released by the UK Health Security Agency (UKHSA) says Brits should "avoid physical exertion in the hottest parts of the day" .

It comes after a record 40C was forecast in London and the south east of England for next Monday (July 18), leading authorities to issue the nation's first ever 'extreme heat warning'.

READ NEXT: 'Thousands' of Brits could die in this weekend's sizzling 40C heatwave, says expert

Other recommendations from the UKHSA include drinking plenty of fluids and steering clear of "excess alcohol", as well as closing curtains on windows that face the sun.

Dr Agostinho Sousa, Head of Extreme Events and Health Protection at UKHSA, said: "We want everyone to enjoy the hot weather when it arrives, but also to check in on their vulnerable family, friends and neighbours to make sure they are prepared for the warm conditions ahead.

"High temperatures are predicted for a prolonged period, so make sure to follow our simple health advice to beat the heat, such as covering windows exposed to direct sunlight and making sure that fridges, freezers and fans are working properly."

A more dire warning was issued by Penny Endersby, chief executive of the Met Office, who said the heat was unprecedented and that the weather agency's alert was not an invitation to go sunbathing.

She said: “This is the first time we have issued a Red National Severe Weather Warning for extreme heat and the first time 40C has been forecast in the UK.

"In this country we’re used to treating a hot spell as a chance to go and play in in the sun. This is not that sort of weather."

The current highest temperature ever recorded in the United Kingdom is 38.7C, which was registered at Cambridge Botanic Garden on 25 July 2019.