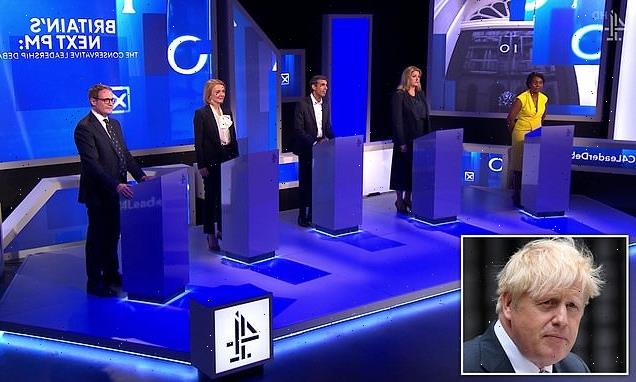 ‘Is Boris Johnson an honest man?’ Awkward moment Tory MPs squirm over question on PM – as Tom Tugendhat is the only candidate to give a straight response

This is the awkward moment Tory MPs squirmed as they were asked whether Boris Johnson is ‘an honest man’ – as Tom Tugendhat received applause for being the only candidate to give a straight answer.

The five remaining candidates have appeared in a live debate on Channel 4 this evening to take questions on a range of issues including the cost of living crisis and whether they can each be trusted.

But the debate’s opening questions were dominated by the shadow of Mr Johnson’s time in office, with Liz Truss, Penny Mordaunt, Kemi Badenoch, Rishi Sunak and Mr Tugendhat asked if he is an honest man.

Ms Mordaunt then added: ‘There have been some really severe issues and I think he has paid a price for that.’

Former Chancellor Mr Sunak, who resignation with ex-Health Secretary Sajid Javid sparked Mr Johnson’s downfall, said there were a ‘number of reasons’ why he had left his role. 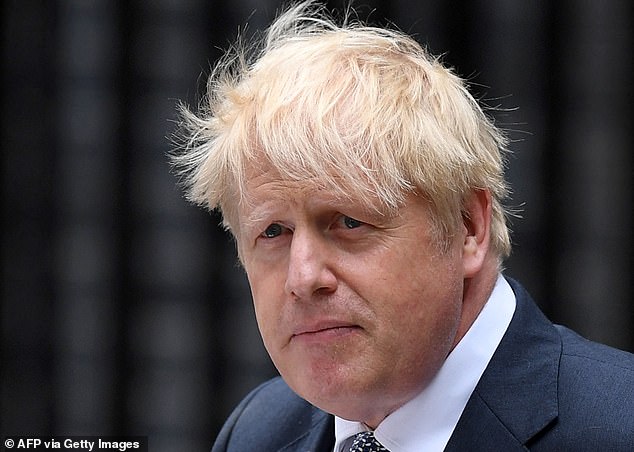 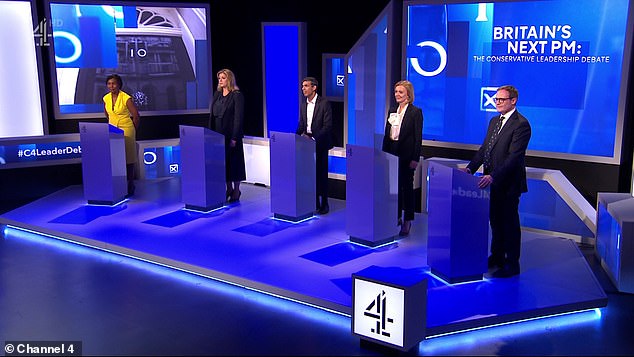 He answered: ‘I tried to give him the benefit of the doubt for as long as possible and ultimately I reached the conclusion that I couldn’t, and that’s why I resigned…

‘There were a number of reasons that I resigned but trust and honesty was part of that.’

Foreign Secretary Ms Truss said the Prime Minister had been ‘very clear himself that he made mistakes in Government’ but she had taken his explanation for inaccurate statements over Partygate ‘at face value’.

Mr Tugendhat, a long-term critic of the PM, then received a round of applause from the studio audience when he was the only candidate to simply reply ‘no’.

He told the debate: ‘I’ve been holding a mirror to many of our actions and asking those in our party, those in our leadership positions, to ask themselves ‘is that what the public really expects?

It came after Ms Truss had earlier vowed to take an axe to taxes hitting families and businesses today as she ratcheted up the pressure on her rivals for the Tory leadership.

The Foreign Secretary vowed to temporarily remove green levies to take £153 off household power bills and relieve the cost-of-living pressure. 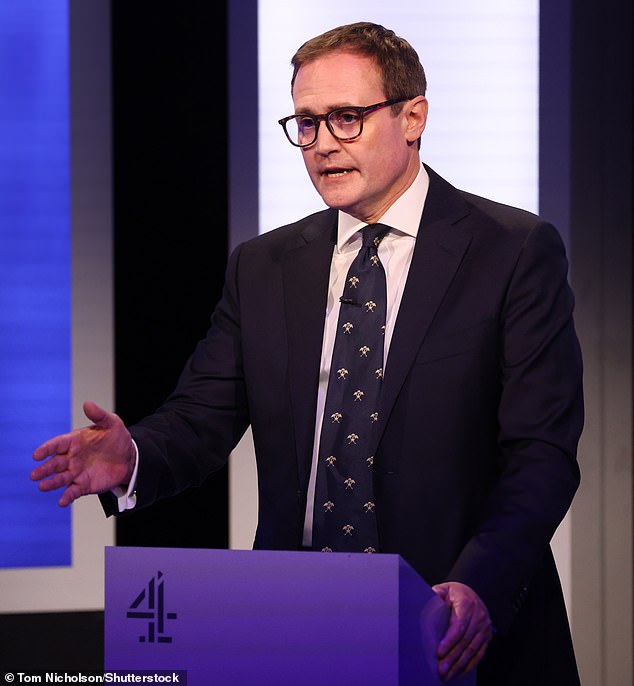 Mr Tugendhat, a long-term critic of the PM, received a round of applause from the studio audience when he was the only candidate to abruptly answer the question 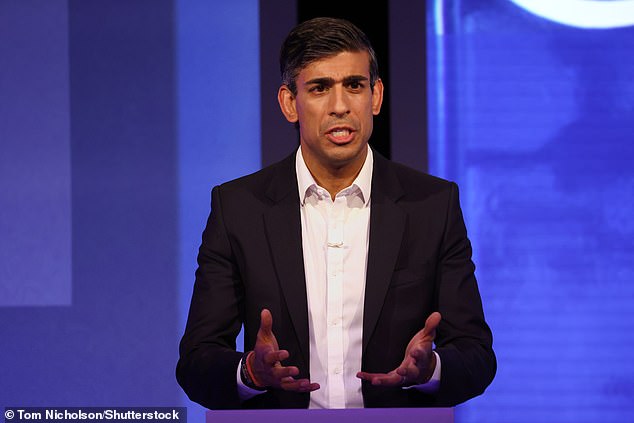 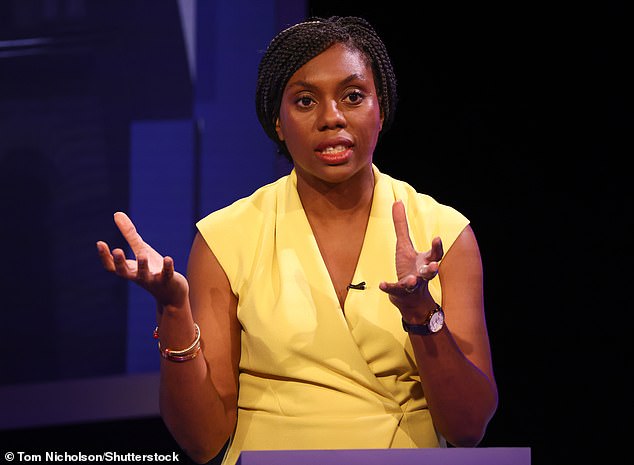 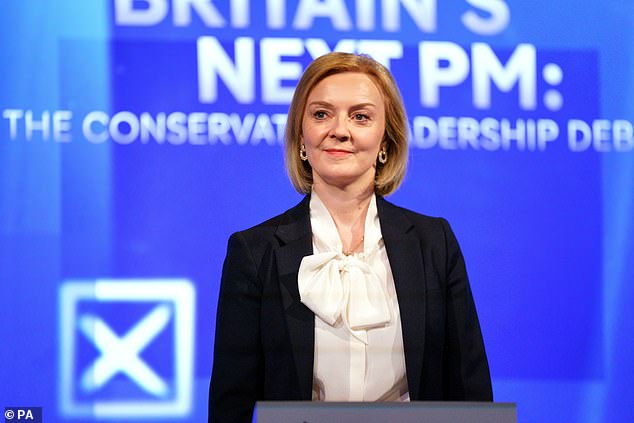 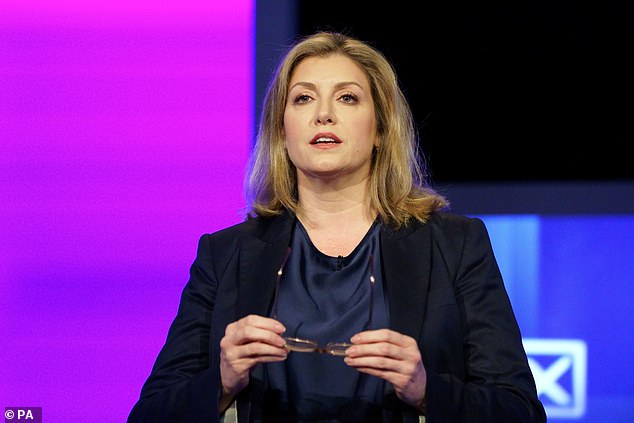 Ms Mordaunt told the debate: ‘There have been some really severe issues and I think he has paid a price for that’

Ms Truss, who is languishing in third in the race to replace Boris Johnson, also vowed to reverse a planned increase in corporation tax next year from 19 to 25 per cent – at a cost of £16billion.

She made the pledge as she and the other four MPs still in the race for No10 faced off for the first time, in an online hustings.

Her tax pledges were in contrast to rivals including frontrunner Rishi Sunak, who again refused to commit to tax cuts. He told those watching the Zoom event organised by the Conservative Home website that controlling soaring inflation was more important than blindly cutting tax.

Ms Truss said: ‘We immediately need to start putting money back into people’s pockets, we know families are struggling to make ends meet at the moment.

‘I would reverse the national insurance rise, I opposed it in Cabinet at the time because I thought it was a mistake, I think it’s even more of a mistake now when we’re facing such strong economic headwinds.

‘I would also have a temporary moratorium on the green energy level to cut £153 from people’s energy bills.

‘And I would also not do the corporation tax hikes because I think it’s vitally important that we’re attracting investment into our country.’

They jostled this afternoon in a digital hustings after favourite Penny Mordaunt accused rival camps of deploying ‘black ops’ to block her from the last two in the contest because they know she will win.

The trade minister – a surprise bookies’ favourite – demanded her opponents tone down their tactics as she boasted about polls suggesting is the most popular with party members.