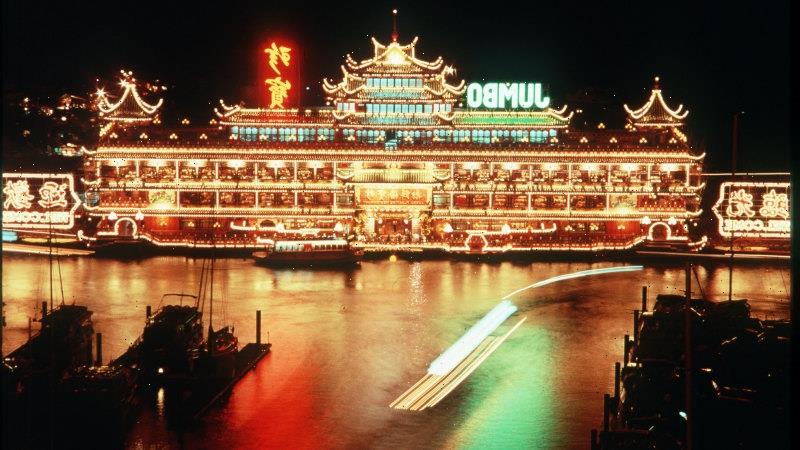 Long before there was Masterchef, there was The God of Cookery. In the 1996 film, Stephen Chow judges a fictional cooking competition that captivates audiences across China. The finale was held inside Jumbo Floating Restaurant – an epic scene of decadence befitting Jumbo’s iconic status. Now Jumbo lies at the bottom of the ocean, as do many of Hong Kong’s hopes of returning to its halcyon days.

The 76-metre-long behemoth, which could sit 2300 diners at a time, capsized in bad weather on Monday after being towed 690 kilometres towards the Paracel Islands in the South China Sea. It got that far with all the seaworthiness of a floating imperial palace, complete with a dragon throne, aquarium and a six-storey pagoda. By Tuesday afternoon, it was resting 1000 metres below sea level. 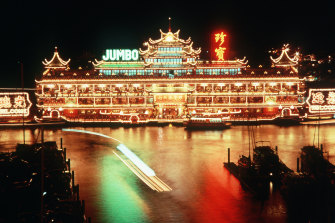 Jumbo Floating Restaurant was being towed to Southeast Asia before it capsized.Credit:Hong Kong Tourist Association

Jumbo closed at the start of the pandemic in March 2020, then floundered under the mountain of maintenance required to keep it afloat. Last week it set sail from Hong Kong to a destination unknown. A spokesperson for the company told the South China Morning Post the vessel was being towed to somewhere in Southeast Asia. But it never made it.

It is a poetic end for a vessel that came to epitomise Hong Kong’s excess of the 1980s and 1990s when Western and Chinese money flooded into Asia’s financial capital. The floating kingdom of Hong Kong casino tycoon Stanley Ho marked the centre of Aberdeen Harbour. Its bookings surged on the back of tourism and investment, filling its thousands of seats nightly with diners chowing down on crabs, lobster, and roasted suckling pig.

“The food is fresh and bland enough for unadventuresome diners,” an advertorial for the Hong Kong tourism board wrote in 2002. “But you don’t really come here for the meal. You come because it’s Jumbo.”

The Queen ate there, so did Jimmy Carter and Tom Cruise. But they have all long since disappeared from Jumbo and Hong Kong, which severed its ties to Britain in 1997, wiped out the pro-democracy movement in 2020, and shut its borders to the world that same year. 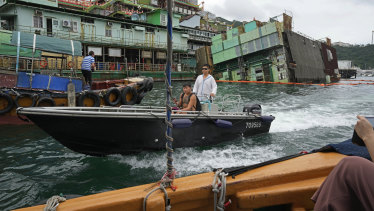 A kitchen section of Jumbo sinks, back right, on Monday, before the restaurant’s main building was towed away.Credit:AP

At its peak in 1987, a Jumbo replica – the Tai Pan – was parked opposite the Sydney Opera House by restaurateur Margaret Shen. It lasted a year before being sold to Ho and taken back to Hong Kong to expand Jumbo’s empire. Jumbo’s imperial kitsch had not translated well to Circular Quay.

“Each time I see it, I experience waves of nausea, and I know thousands of Sydneysiders feel the same way,” Sydney Morning Herald critic Leo Schofield wrote ahead of its departure. “It’s finally going home.”

A decade later it faced its own reckoning in Hong Kong. For the first time in more than 20 years, Jumbo operated at a loss in 1998. The Asian financial crisis had taken its toll, the Japanese economic downturn was in full swing, and tourism was struggling. But Hong Kong had also changed.

The gaudy Jumbo fell out of favour in a city where restaurants open and close like a revolving door. Its owner, Melco International Development, said in May that the business had not been profitable since 2013 and total losses had exceeded $18 million.

That left it hopelessly exposed to its only target market: tourists. When pro-democracy protests shut down large parts of the city in 2019, tourism turned into a trickle. Then a brutal crackdown by authorities in 2020 dealt it an almost fatal blow. By the time COVID hit in March 2020, Jumbo was a floating duck.

A decade earlier Jumbo had incidentally also starred in Contagion – a film about a pandemic tearing apart society.

On Weibo, mainlanders and Hongkongers mourned the loss of the floating restaurant, but also what it symbolised for the city. 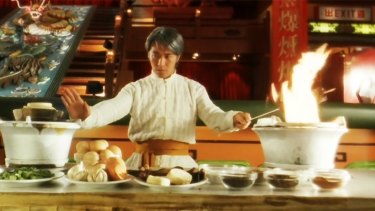 A scene from The God of Cookery filmed inside Jumbo Floating Restaurant.

Judy Chan Ka-pui, a member of the Hong Kong Legislative Council had one word: “Tragedy.”