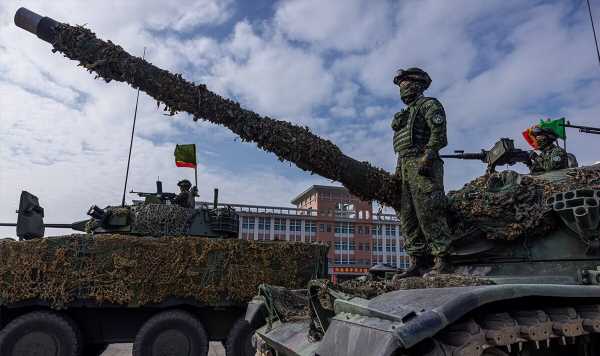 Conscripts in Taiwan have warned that their training was not sufficient to prepare people for the threat of a Chinese invasion. Military tensions in Asia have heightened in recent months as Beijing ramps up its drills in close proximity to its island neighbour.

While Taiwan is a self-governing democracy, China considers the island its own, and President Xi Jinping is determined to bring the country back under Beijing’s control.

In response, Taiwan has spent years preparing for the possibility of a Chinese attack. But those who have been trained by the military fear the country is not ready.

Speaking to CNN, former conscripts described how mandatory military service did not adequately train them.

Frank Liu, who underwent training in 2021, said: “In our company, we had more than 100 assault rifles, but only slightly more than a dozen could be used for shooting practices.

“A lot of those assault rifles were made many decades ago, and many were too worn out to be used in training. The weapons had to be rotated among ourselves.”

Paul Lee, a factory manager from the capital Taipei, served in 2018. He also found that training was not as advanced as he’d hoped.

“I’m concerned that many people who underwent the training with me won’t even be able to operate a rifle with confidence.”

Other former conscripts said they were taught “barely anything” by their commanders and were baffled when they were shown how to use bayonets in combat.

Another conscript called Dennis fears that he and his fellow countrymen will be “cannon fodder” if a war does break out.

He said: “We were assigned simple tasks, and we spent most of the time helping with cleaning and washing the cannon carts. If war breaks out today and I am told to work as an artilleryman, I think I will just become cannon fodder.”

Leaders in Taiwan remain adamant that China will invade.

“In 2027, Xi Jinping is likely to go into his fourth term, and, if in his previous three terms he cannot claim any achievement during his office, he might need to think about something else for him to claim as his achievement or his legacy.

“If you look at the Chinese situation right now, the economy is going down. People are not happy, the real estate business seems to be melting down.

“If Xi Jinping cannot change the situation domestically in China, you might want to resort to the use of force or creating a crisis externally to divert domestic attention or to show to the Chinese that he has accomplished something.

“We are concerned that Taiwan might become his scapegoat.”