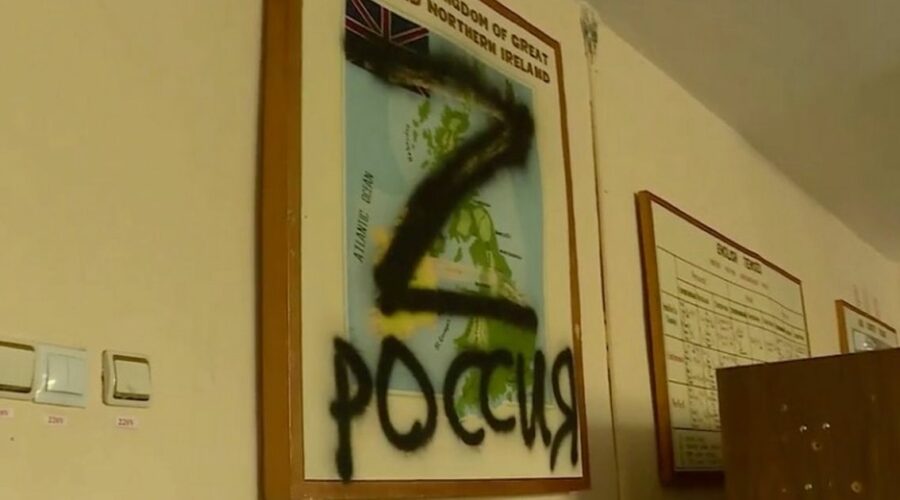 Evil Russian soldiers who seized a school building as a strategic military fortress in Ukraine left eerie graffiti with the war-mongering ‘Z’ scrawled over a map of Britain and naked women painted on the walls.

The basement, which around 200 soldiers temporarily lived in, was found kitted out with cosy blankets and carpets pillaged from the local area while another spray-painted message declared: “We will return.”

It marks the sinister remains of Vladimir Putin’s men after they fled from the Kherson region amid an advance from heroic Ukrainian troops.

A local fire chief, Volodymyr, showed Sky News around the creepy school in Velyka Oleksandrivka – known as a quiet market town before it was plunged onto the frontline of a bloody battle.

He explained: “It's sad, everything is sad. We just want to win as soon as possible and start rebuilding.

“Everything here was taken from people's shops and houses. Curtains, carpets, pillows, they were living in here.”

The three-storey community school became a key strategic position for fighters due to its placement near the valuable Inhulets River.

Alongside the sick pro-Kremlin graffiti, sandbags were found in classrooms and areas to fire weapons out of the building had been set up.

Bookshelves had even been turned into makeshift blast walls and temporary kitchens and dining rooms had been built.

Rooms belonging to senior officers had luxurious silk bedding and bottles of perfume.

The recapturing of significant areas of land seized by Russia came so quickly that some of the invading troops are now sleeping with grenades because they are worried about being captured by Ukraine and would rather die than surrender.

In one harrowing intercepted conversation, a terrified soldier could be heard telling his wife: "It's scary s***, when we were being fired at.

“I prepared a grenade to put it under myself if something happens, you see. Because getting captured is a hell of a thing.”

Stay in the loop with all the latest Daily Star news by signing up to one of our free newsletters here.