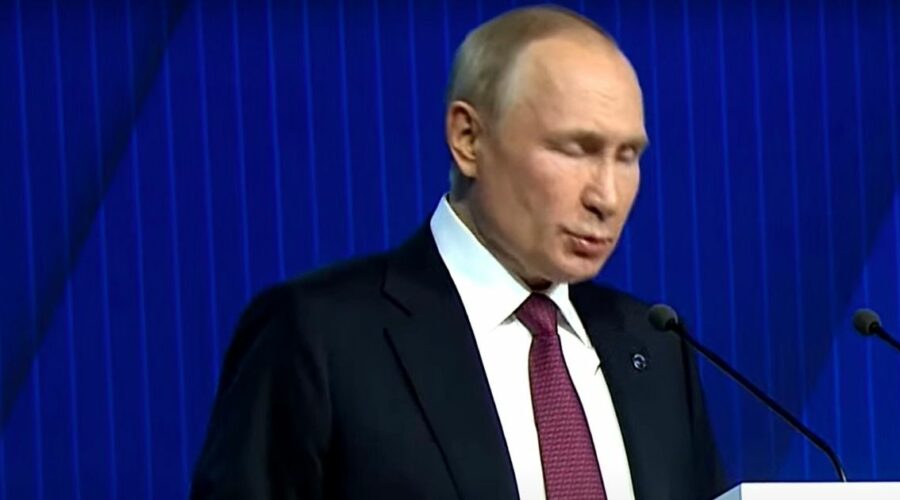 Russian dictator Vladimir Putin has got tongues wagging about his health once again after he gave a speech with what appears to be large bruises on his hand.

The news comes just days after he appeared to have what some speculated looked like the marks of an IV drip.

Putin’s health has been a frequent talking point in recent months, with many claiming he has been showing the symptoms of someone with cancer.

During his latest speech in Moscow, which saw him give a Q&A session at the 19th Annual Meeting of the Valdai Discussion Club, he said the world faced its most dangerous decade since the Second World War.

In one of his longest public appearances since he invaded Ukraine, the authoritarian leader’s hand appeared to have a blue colouring to it.

The tint on his right hand looked like bruising, raising speculation about previous claims he had track marks in the same spot from having needles inserted there.

In the footage from October 23, his hand was seen as he tried to grab one of his troops.

The footage led to Jason Jay Smart, a reporter from the Kyiv Post, saying: "Videos released by [Russian] Government news show what could be track marks, from IVs, on the hand of Putin."

He claimed two videos had been released, with one appearing to have a watermark intentionally covering his hand.

The footage of the interaction was later deleted.

Today’s massive three-and-a-half-hour talk saw him claim he didn’t regret his "special operation" in Ukraine and warned the West it was playing a “dangerous and dirty game”.

In it, he criticised previous UK Prime Minister Liz Truss for having threatened Russia with nuclear weapons during her 49 days in power.

He branded Western leaders arrogant but said Russia did not regard itself as an enemy of the block.