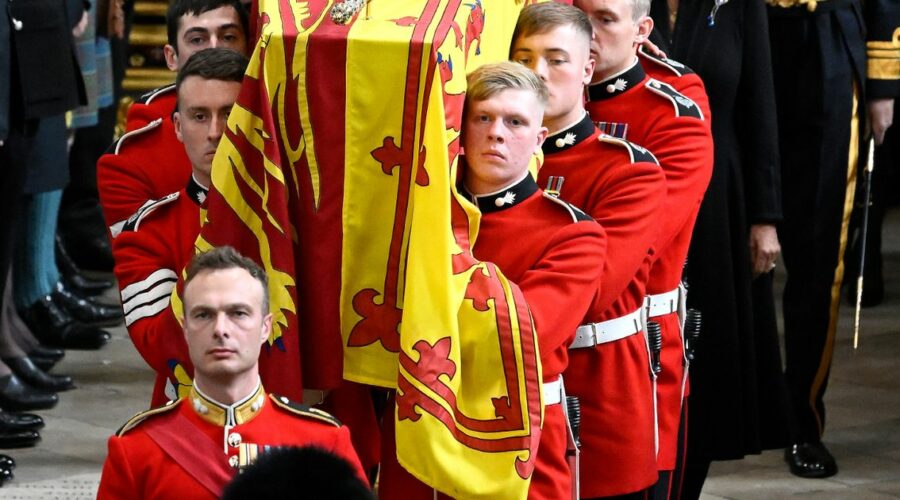 The Queen’s coffin has made an incredible journey – first travelling over 100 miles from the Scottish Highlands towards Edinburgh, before heading to London.

The Queen then laid in rest at Westminster Hall for five days, giving thousands of people chance to pay their respects to the late monarch.

Draped in the Royal Standard flag, and accompanied by flowers, the orb and sceptre, the Queen’s coffin was first carried into Westminster Hall by eight bearers.

The soldiers, who came from the Queen’s Company, 1st Battalion Grenadier Guards, were chosen specially to lift the coffin.

Their role was to “protect her body, both in line and in death,” according to Former British Army soldier Major Adrian Weale.

The soldiers also carried the Queen’s coffin into Westminster Abbey for a funeral service and St George’s Chapel in Windsor for the Committal Service, on September 19.

Many royal fans were stunned after finding out how much the coffin actually weighs.

How much does the Queen’s coffin weigh? The Queen’s coffin, which is lined with lead, is estimated to weigh between 250kg and 315kg – that’s a quarter of a tonne.

Royal fans took to social media to convey their shock and admiration for the weight of the coffin.

One royal fan said on Twitter: “I learned today that HM The Queen’s coffin is lead lined. The weight that those young soldiers have had to bear must have been enormous. They carried out their duty with great dignity.”

Another said: “I can’t imagine the weight of the Queen’s coffin. My husband told me it has lead in it to preserve the body better,” adding: “These young men are doing an outstanding job”.

A third added: “Whenever I saw them, I keep wondering how much the Queen weighs and the extra weight from the coffin and the now embalmed body!”.

Why is the Queen’s coffin lined with lead? The Queen’s coffin is made from English oak, and lined with lead, which isn’t usual for members of the Royal Family.

This prevents air and moisture from building up – helping to preserve the body.

This idea originated from the Victorian era, where it was necessary to preserve bodies in an airtight coffin.