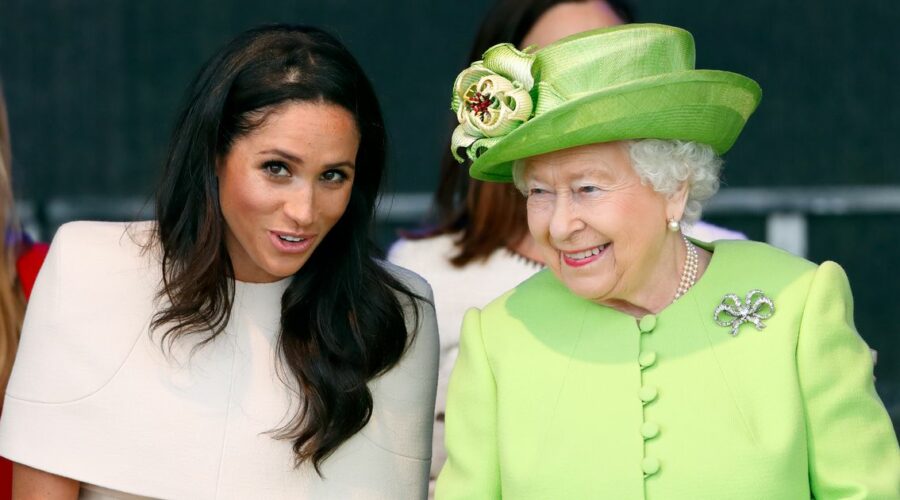 Meghan Markle has had a complicated relationship with the Firm since she first met her now-husband Prince Harry in July 2016.

But the bond she had with the Queen was always thought to be respectful – despite claims made in the controversial 2021 interview with Oprah Winfrey.

READ MORE: Harry and Meghan 'furious' at King's decision not to give Archie and Lilibet HRH titles

It was during an event at Windsor Castle just before the former Suits star wed Prince Harry in May of that year, author Katie Nicholl said.

Meghan was reportedly testing some of the food that was going to be served at the reception when the Duchess of Sussex "got very upset" when she "felt that she could taste egg" in a dish.

Ms Nicholl said at the time the Duchess of Sussex was told there wasn't any egg in the food but she retorted, "no, I can taste it”.

She said: "Meghan got very upset when she felt that she could taste egg in a dish when she was told there was no egg in there, and she said, 'No, I can taste it, I can taste there's egg in this dish.'"

The Queen then "suddenly" walked in to a "bit of an upset," and she "quietly took Meghan to the side".

Her Majesty informed the soon-to-be-bride that the Royal Family does not speak to people "like that", Ms Nicholl said.

She claimed: "I think there was a bit of an upset when suddenly the Queen walked in, because of course, this was Windsor Castle, this is her home.

"And she just quietly took Meghan to the side and said, 'Meghan, in this family we don't speak to people like that.'

Meghan has appeared to be in a much more respectful mood in recent days during events around the death of Her Majesty The Queen.

But the incident is one constantly brought up by those who use it as evidence of her behaviour considering bullying allegations that have followed her.

However, at the time news of the incident surfaced online a spokesperson for Meghan said: "The Duchess is saddened by this latest attack on her character, particularly as someone who has been the target of bullying herself and is deeply committed to supporting those who have experienced pain and trauma.

"She is determined to continue her work building compassion around the world and will keep striving to set an example for doing what is right and doing what is good.

"Let's just call this what it is – a calculated smear campaign based on misleading and harmful misinformation. We are disappointed to see this defamatory portrayal of The Duchess of Sussex given credibility by a media outlet.

"It's no coincidence that distorted several-year-old accusations aimed at undermining the Duchess are being briefed to the British media shortly before she and The Duke are due to speak openly and honestly about their experience of recent years."