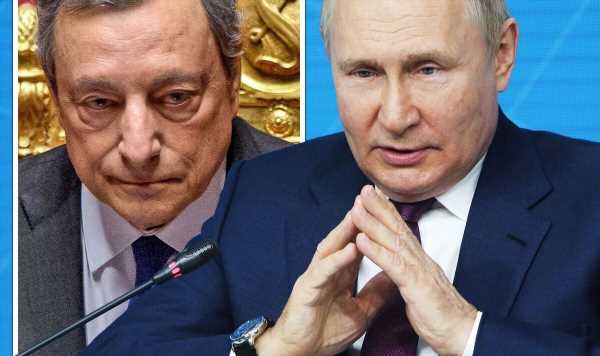 EU on track for nightmare energy ‘rationing’ ahead of cold winter

The resignation of outgoing Italian Prime Minister Mario Draghi on Thursday could call into question the stability of Europe’s politics as a whole. A new election in Rome, some warn, might bring EU-sceptical forces to power, threatening the bloc’s cohesion in the midst of Russia’s war on Ukraine.

Mr Draghi had first tried to quit a week earlier when a populist party — the Five Star Movement (M5S) — in his broad-based coalition government refused to back an economic proposal for businesses and families.

It was then that Medvedev, former President of Russia and current deputy chairman of the country’s Security Council, seemed to make fun of the continent’s leadership struggles.

His comment followed remarks he made after Mr Johnson quit as leader of the Conservative Party, of which he said: “Ukraine’s best friends are leaving. Victory is in danger! The first is gone…”

Albeit for different reasons, Mr Draghi’s and Mr Johnson’s resignations happened within two weeks – and as the West aims to show it stands together against Moscow, the Russians might well be finding joy in watching European nations’ crises unravel from their desks in the Kremlin. 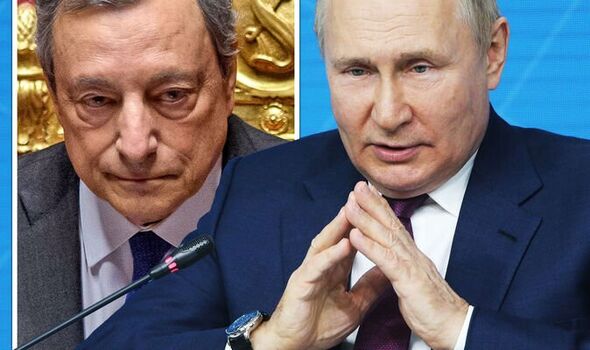 Mr Draghi was a particularly popular choice as Prime Minister.

He took office in 2021, as Italy wrestled with the coronavirus pandemic and an ailing economy.

He then became a central figure of unity on the energy crisis, social inequality and the enactment of reforms needed to obtain the next tranche of the €200bn Rome is due to receive from the EU’s post-pandemic recovery fund.

But the 47-year-old, dubbed Super Mario for his handling of the eurozone crisis as head of the European Central Bank (ECB), also stood out for his leadership in the EU’s approach to the Ukraine war. 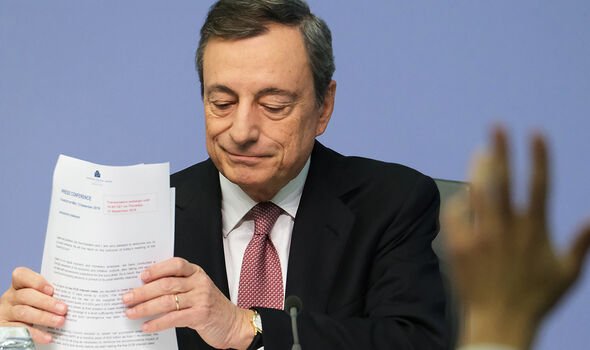 Mr Draghi was widely regarded as a pillar of national and union-wide stability, and the prospect of his departure was quickly felt on the stock market.

Thursday’s rate rise was the first by the ECB since 2011 and concluded eight years of negative interest rates.

Rasmus Andresen, head of the German Greens in the European Parliament, told Focus Online: “Italy is one of the largest and most important economies. Instability in Italy can lead to insecurity in the entire Eurozone.”

He added: “Italy’s crisis must not become a euro crisis.”

According to Italian media, the state of affairs in Rome has been left in shambles.

The daily La Stampa reported: “It is as if an abyss had opened up into which, in addition to the national unity government, a large part of Italy is also being dragged down, which was prepared to make sacrifices in order to regain credibility in Europe and the world, thanks to the trust placed at all levels in the man who left the stage yesterday.”

The Corriere della Sera outlet, meanwhile, talked about an “urge to self-destruct to which even the best fall victim”.

Italy’s constitution mandates elections must be held within 70 days of the decree ending Parliament, whose five-year term would have expired in March 2023 – meaning elections will take place in October at the latest.

Mr Draghi’s government will remain in office in a caretaker role until then.

Italians affected by high inflation and fearful of energy shortages are thought to be hoping for a smooth transition to a cohesive new government.

Kyiv, meanwhile, might be hoping for an equally supportive leader who follows in Mr Draghi’s footsteps when it comes to shipments of arms to Ukraine.