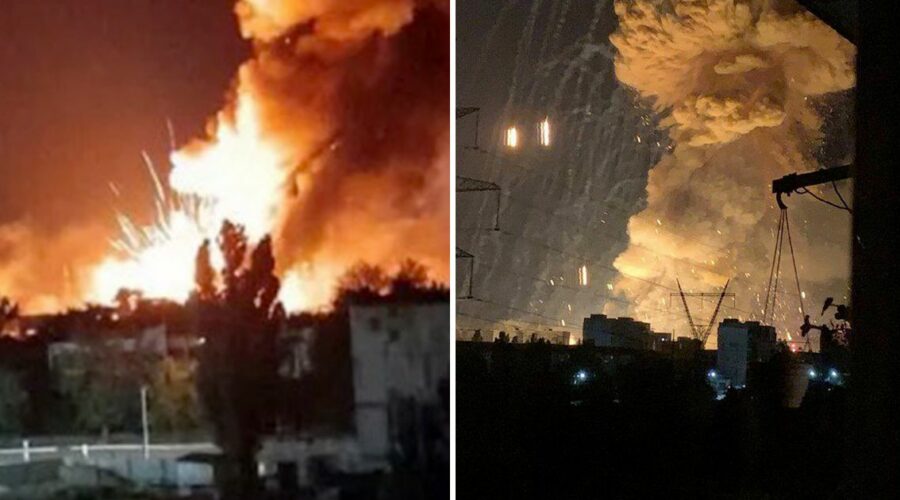 Vladimir Putin's war on Ukraine has been rocked as he has lost another six Kremlin troops in a huge fireball explosion.

Footage shows the bright blast, centred on a Russian ammunitions depot in the Kherson region, which was described as "absolutely massive" by investigative Twitter account @IntelCrab.

Eastern European news outlet NEXTA then added that a senior regional official in Ukraine confirmed the blast in Nova Kakhova.

They reported that Serhiy Khlan, a Ukrainian official who sits on the regional council for Kherson, wrote on Facebook: "In Nova Kakhovka minus one Russian ammo depot.

A TASS report published on Tuesday morning described "six people confirmed" dead and "many dozens injured" in an explosion attributed to a Ukrainian military attack on fertiliser warehouses.

The agency quoted Vladimir Leontyev, head of the military-civilian administration of the Kakhovka district, saying: "There are six people confirmed [dead]. And many dozens injured, [with] shrapnel wounds, cuts."

He added: "There are still many people under the rubble. The injured are being taken to the hospital, but many people are blocked in their apartments and houses."

This is the second night of explosions in four days in the town, according to CNN.

Mr Khlan also issued a warning to residents: "Please take care of yourself and do not come close to the place of the detonation."

TASS then said a Russian official claimed the Ukrainian attack on the depot was carried out with US-made weapons and that multiple launch rocket systems were used in the strike.

The town is home to a key hydroelectric dam, which forms part of the water supply to the Crimea peninsula, which Russia has held for almost a decade.

The southern Ukrainian region was one of the first claimed by the Russian forces during the invasion.