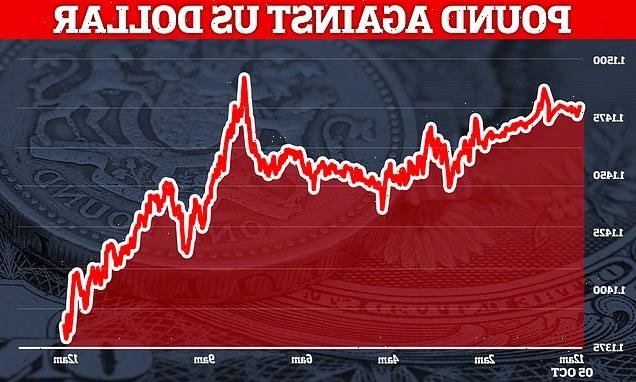 Pound falls by nearly 1 per cent to 1.136 against the dollar after Liz Truss’s speech but FTSE rises 36 points

The under-pressure pound fell by nearly 1 per cent to 1.136 against the dollar after Liz Truss’s conference speech.

Sterling had initially hit a three-week high against the dollar in early session trading, but soon slipped back amid ongoing fears over the Government’s credibility.

The Prime Minister urged the Conservative Party to stick together and help transform the economy and the country, as she fights to restore her dwindling authority after a chaotic first month in office.

After tumbling to a record low of $1.0327 against the dollar last week in the aftermath of the government’s ‘mini-budget’ announcement, the pound has recovered some ground.

It was also boosted on Monday after the government reversed a cut to the highest rate of income tax. 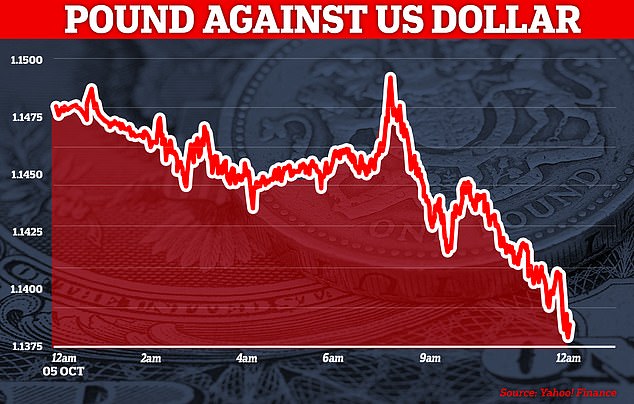 Sterling had initially hit a three-week high against the dollar in early session trading, but soon slipped back amid ongoing fears over the Government’s credibility 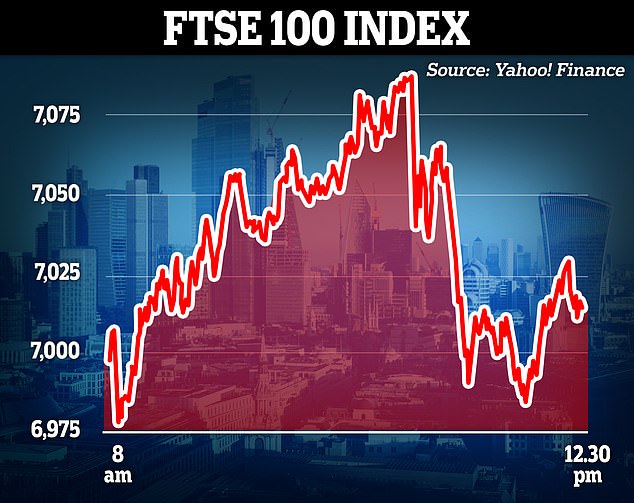 ‘Compared to the wild swings over the past week or so it’s not a significant move,’ said Susannah Streeter, senior investment and markets analyst, Hargreaves Lansdown, referring to the pound’s performance.

Despite the slightly better reading, the data brings into focus the challenges facing British businesses as they suffer the sharpest contraction in activity since early last year.

Amid recession fears and concerns around the UK’s fiscal policy, the pound is down 16.5 per cent versus the dollar so far in 2022.

Meanwhile the dollar has been rising, as the US Federal Reserve hiked interest rates aggressively to control inflation.

The Bank of England is also battling to control soaring inflation, with the market expecting a bumper hike of 100 basis points at its next meeting in November.

Truss pledged on Wednesday to ride out the turmoil unleashed by her tax-cutting economic agenda, saying the ‘disruption’ will pay off in a wealthier, more efficient Britain.

Truss said ‘I am ready to make the hard choices.’ Many in her party are not so sure. 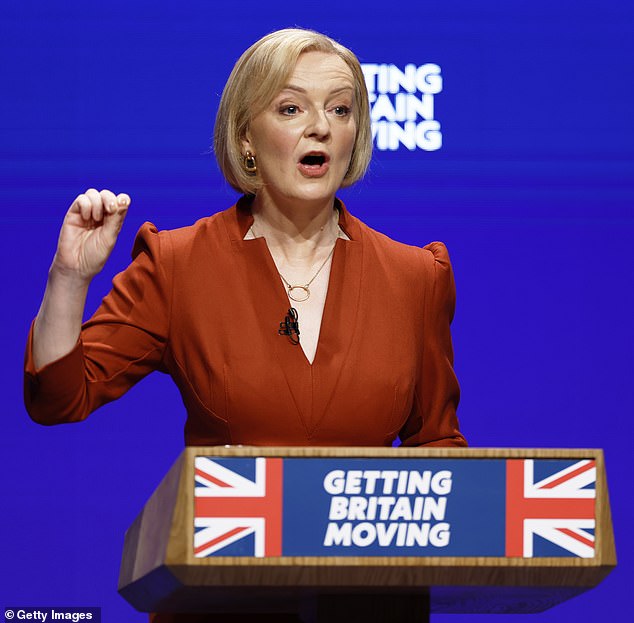 Liz Truss said in her keynote Tory conference speech: ‘I know that we can do better and we must do better’

Truss closed a tumultuous Conservative conference in the central English city of Birmingham with a speech intended to revive the spirits of delegates.

Many are in a glum mood after a four-day gathering that saw policy U-turns from the government, dire opinion polls and open rebellion from lawmakers who fear the party is doomed to lose the next national election under Truss, who took office just a month ago after winning a party leadership vote.

Truss vowed to stick with her plan to reshape Britain’s economy through tax cuts and deregulation in a bid to end years of sluggish growth.

She said cutting taxes was ‘the right thing to do, morally and economically,’ and accused her opponents of being ‘anti-growth.’

After taking the stage to the strains of the 1990s hit Moving on Up,’ Truss acknowledged that ‘these are stormy days’ for a country still mourning the death of Queen Elizabeth II and rocked by Russia’s invasion of Ukraine.

Truss shrugged off a brief protest by two Greenpeace activists who unfurled a banner in the hall reading ‘Who voted for this?’ – and were escorted out of the hall to boos from the audience.

‘Whenever there is change, there is disruption,’ Truss said. ‘Not everyone will be in favor. But everyone will benefit from the result – a growing economy and a better future. That is what we have a clear plan to deliver.’ 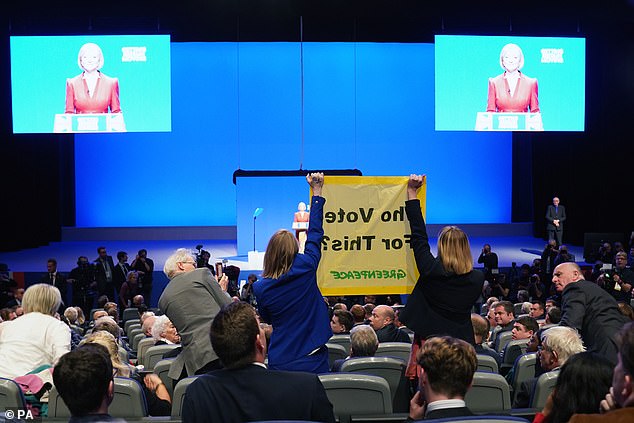 Truss shrugged off a brief protest by two Greenpeace activists who unfurled a banner in the hall reading ‘Who voted for this?’ – and were escorted out of the hall to boos from the audience

That plan already has many critics inside the Conservative Party. Truss’ first big policy, a stimulus package that includes £45billion ($50billion) in tax cuts to be paid for by government borrowing, alarmed financial markets when it was announced on September 23.

The pound plunged to a record low against the dollar, and the Bank of England was forced to intervene to prop up the bond market and stop a wider economic crisis.

Under political and financial pressure, the government on Monday scrapped the most unpopular part of its budget package: a tax cut on earnings above 150,000 pounds ($167,000) a year.

That will save about £2billion, a small share of the government’s £45billion tax-cutting plan. Most economists say deep public spending cuts will be needed to pay for the rest.

The government says it will publish a fully costed fiscal plan, alongside an economic forecast from the independent Office for Budget Responsibility, on November 23.

Truss defended the chaotic rollout of her economic measures, saying that in extraordinary times, ‘it would have been wrong not to have proceeded rapidly with our energy and tax plan.’

Truss argues that her policies will bring economic growth, higher wages and eventually more tax revenue for the government to spend.

Critics say the plans do little to help millions of people who are struggling right now with a cost-of-living crisis fueled by soaring energy prices. 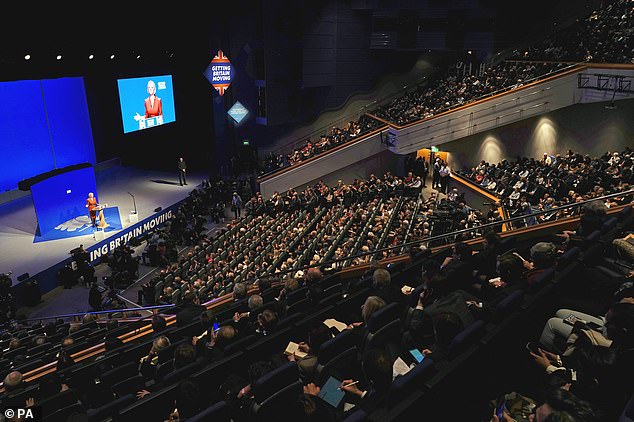 Truss insists she is committed to supporting the most vulnerable, pointing to a cap on energy prices that took effect on October 1.

But she has refused to promise that benefits and state pensions will increase in line with inflation, which has been the practice for years.

That has alarmed some Conservative lawmakers, who say it amounts to penalizing the poor while giving tax cuts to the better-off.

Several said during the conference that they would not vote for the measure.

‘There will be a national uprising if this goes ahead, because it is nothing to do with making the growth policies of the government work, it is simply making the poor pay the price,’ he told the BBC.

In her speech, Truss depicted Britain’s economic challenges as part of the global crisis unleashed by Russia’s invasion of Ukraine, as she vowed to ‘stand by our Ukrainian friends, however long it takes.’

‘The scale of the challenge is immense,’ she said. ‘War in Europe for the first time in a generation. A more uncertain world in the aftermath of COVID. And a global economic crisis. That is why in Britain we need to do things differently.’ 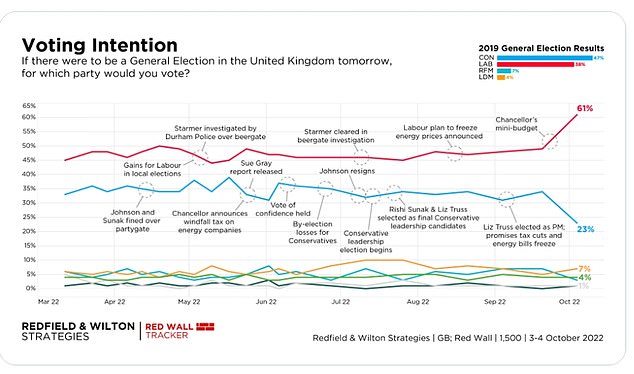 A shock poll last night showed Labour leading by 38 points in the Red Wall, up from a 15-point lead just two weeks ago

In a dig at her critics, Truss said that as a woman and graduate of a public high school – in a party dominated by privately educated men – ‘I know how it feels to have your potential dismissed by those who think they know better.’

But uniting her party will be a tough task. As delegates met for panel discussions and wine receptions this week inside a cavernous conference hall, the government descended into factional fighting.

Amid the Tory turmoil, the opposition Labour Party has taken a commanding lead in opinion polls.

A national election does not have to be held until 2024, but many Conservatives fear the party is running out of time to close the gap.

Polling expert John Curtice said ‘all of the ingredients for electoral defeat are in place’ for the Conservatives.

‘The question is whether or not in the end they are combined and put into the oven and thereby baked into the memories and perceptions of voters,’ he told Sky News.