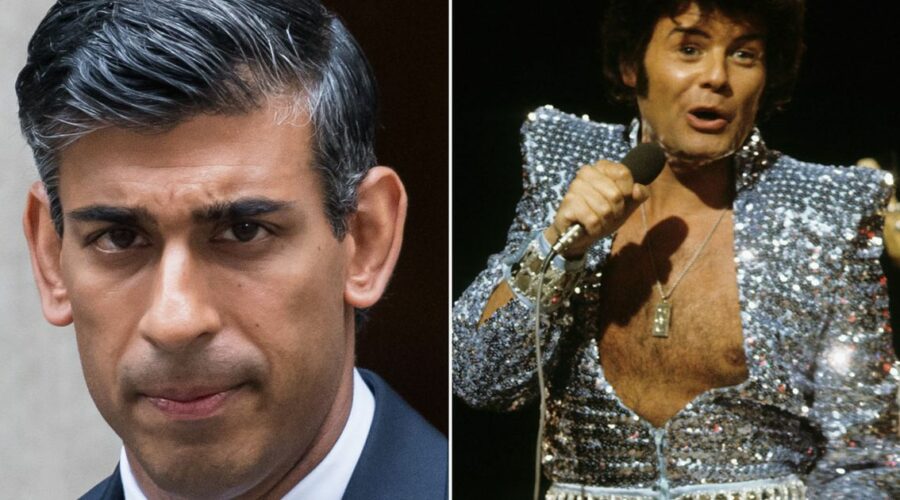 Sunak, who only came to power on Monday (October 24), posted a new video of himself on Twitter during the first 24 hours of his Premiership, and talking about how “together we can achieve incredible things”.

However, the video quickly went viral when people realised what the song used in the background of the one minute and 35-second long video was.

Featuring a heavy drum beat, and clearly on loop, the clip audio clip was actually from disgraced singer Glitter. Although Downing street have since denied using the Glitter track and say the music is a stock track.

Sicko Glitter was once one of the top entertainers in the UK raking in millions of pounds in royalties from his catalogue of hit songs.

He was first convicted for downloading child abuse images in 1999.

Once released he moved to South East Asia and was later jailed in Vietnam for abusing children.

And for some reason, a short clip from his song Rock and Roll Part 2 was used in the new video posted by 10 Downing Street on Twitter.

The song was released in 1972, but since the blokes imprisonment, has been blacklisted – along with all of his other songs.

Music expert Mark Davyd tweeted: “I don't want to tell 10 Downing Street media how to do their job, but that appears to be a sampled drum loop from a Gary Glitter record.”

And author Jenny Landreth tweeted: “Not sure I'd have gone with Gary Glitter's Rock and Roll Part 2 as the soundtrack, but you do you, Rishi.”

It didn't take long for the name Gary Glitter to trend on Twitter, and the video has yet to be taken down.

A Downing Street spokesman told the Daily Star: "It's not Gary Glitter. It's from a stock music selection we don't pay for."