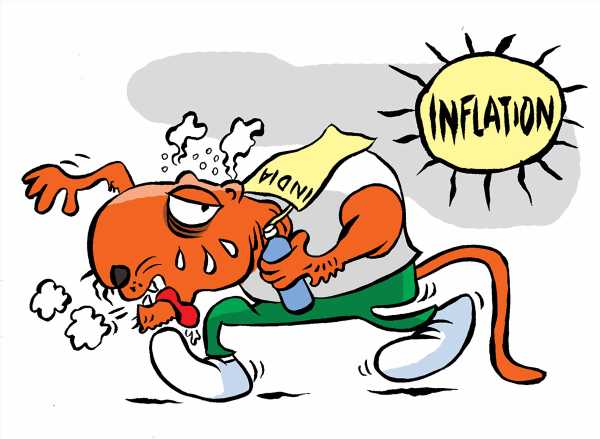 Don’t be surprised if growth in the second half of the financial year drops below 4%, which is where it was in the year before the pandemic, warns T N Ninan.

The signs of an economic slowdown are unmissable.

Whether it is industrial production, electricity generation, exports, or revenue from GST, there is a loss of momentum.

Some indicators flatter to deceive, like bank credit, which is growing at about 14 per cent.

But when wholesale price inflation is at 12.4 per cent, much of the growth merely reflects the general price rise.

Take merchandise exports, which had an initial carry-over momentum from last year’s surge.

But by September they had not only lost that momentum but shrunk — by 3.5 per cent during the month.

The details were even more worrying. Engineering goods exports were down in September by 17 per cent, while textiles (yarn, made-ups, garments, etc) were down by 31.5 per cent.

The sharp surge in electronic goods exports (up a massive 64 per cent) could not fully make up for the ground lost, and in any case this sector has lower domestic value addition.

The larger current account deficit (including trade in services) for the full year is forecast to reach by far the highest level in a decade.

The story with electricity generation is the same as with exports.

This must be viewed against the backdrop of power generation last year (2021-22) having been only 1 per cent more than four years earlier, in 2017-18.

As for the index of industrial production, growth in July was 2.4 per cent, while output growth in the ‘core sector’ (steel, cement, fertiliser and the different energy businesses) during August hit a nine-month low of 3.3 per cent.

The GST numbers are also revealing. After revenue of Rs 1.68 trillion in April (reflecting the annual output surge in March), the figures for subsequent months were Rs 1.41 trillion, Rs 1.44 trillion, Rs 1.49 trillion, and Rs 1.43 trillion.

Collection in September is projected at Rs 1.45 trillion. It couldn’t get flatter than that.

If the economy is levelling off, how does one explain the sharp surge in direct tax collection? One reason for this bright spot against an otherwise darkening horizon is that corporate profits continue to grow, though cost escalation means that margins have been squeezed to their lowest level in nine quarters.

The April-June numbers for nearly 3,000 listed companies showed net profit growth of 22.4 per cent, but this was boosted by the financial sector’s improved health.

Exclude that and the figure was down to 16.3 per cent.

Further, the profit growth was concentrated in half a dozen large companies which accounted for the bulk of the increase.

Note that the key stock market indices are lower today than a year ago, while the rupee may weaken further.

Much (not all) of the bad news is on account of external factors: High oil prices, supply disruptions, a flight to the dollar, and the global economic slowdown.

But we are in a difficult world, and expectations of growth have to be tempered.

It is hard to square the picture painted by the different numbers with the Reserve Bank of India’s (marginally lowered) forecast of 7 per cent growth for the full year.

The World Bank will be closer to the mark with its revised forecast of 6.5 per cent.

Meanwhile, the central bank is caught in the pincer of high inflation and low growth.

Ten-year Treasury bond yields have climbed in the past year from 6.27 per cent to about 7.45 per cent, putting it roughly in the middle of the range of yields over the past decade.

If the yield goes up further as the RBI battles inflation, more steam will leak out of the growth engine.

To counteract that, and helped by tax buoyancy, the government may borrow less from the market and keep interest rates in check.

But don’t be surprised if growth in the second half of the financial year drops below 4 per cent, which is where it was in the year before the pandemic.