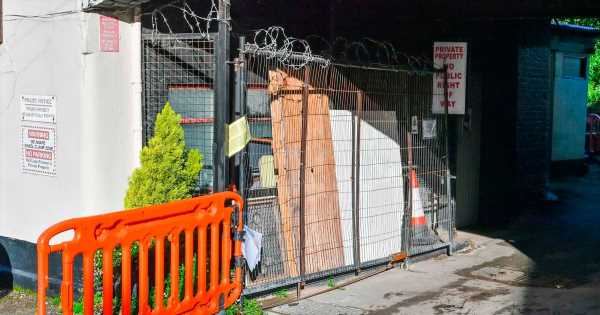 An old-age pensioner is among a group of residents who now feel like prisoners in their own home after a neighbour erected a barbed wire fence.

Locals of Mill Lane in Wimborne, Dorset, have been left furious after having their road blocked by "private property" signs and barbed wire fences cutting off a right of way footpath.

Despite a "goodwill gesture" that was left in good stead by a private estate ownership, it appears that gesture has been revoked following a furious row.

Iron gates topped with barbed wire, CCTV cameras and a sign saying such a gate is "subject to closure without notice" are making residents feel more than uneasy.

One such resident, pensioner Mike Burnside, 84, said the damage had been done to the block of flats by "our neighbour who is the estate manager".

Burnside said: "He has obstructed our access in and out of our little estate. He has put barbed wire on top of some of the gates to stop people coming in and out. It's like a prison.

"Those of us that aren't very mobile can't get out on an evening unless he wants us to. It's disgraceful what he has done.

"If we want to get to the nearby car park, which happens a lot because there aren't many spaces here, we have to walk all the way around the streets rather than using the 30 second cut through outside his shop."

Problems for residents don't end there, with some so enthused and raging by the recent events they have taken to organise a "secret meeting" which will put an end to the fences.

Although they are not yet plotting their great escape, Burnside did say: "We never know when he is going to have the gates open or shut. He uses our fire door for quick access sometimes and we don't make a fuss about it.

"It's like living in a prison block. We had a secret meeting to organise how we stop more of these gates going up."

A spokesperson for Mill Lane Precint Estate countered residential claims, saying: "To date, no public right of way has been legally identified or created by an Order, so legally there are no public rights of way on private land in Mill Lane.

"The estate has allowed permissive access through Mill Lane as a gesture of goodwill and in support of businesses and the public, access is not under threat."