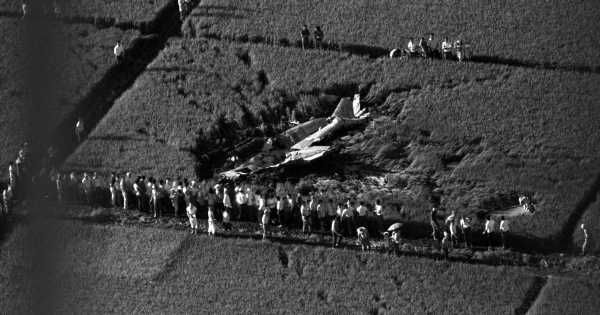 A rookie pilot and his instructor were involved in a devastating and rare air tragedy that caused the deaths of over 160 passengers on a commercial flight.

The people on board All Nippon Airways (ANA) Flight 58, heartbreakingly, saw a freak event coming their way – in the form of a 22-year-old novice fighter pilot.

On July 30 1971, a Japanese domestic flight carrying 162 people made its way from Sapporo on the northern island of Hokkaido to Tokyo.

READ MORE: Disaster strikes as 20 people struck by lightning and killed in matter of just 24 hours

Reaching a cruising height of 28,000 feet, the Boeing 727 made its way south toward the capital with 155 passengers and seven crew members on board.

Also in the air at the time were two Japan Air Self-Defense Force (JASDF) fighter jets on a training mission. In one, an instructor, Captain Tamotsu Kuma and in the other, a 22-year-old trainee pilot, Sergeant Yoshimi Ichikawa.

They were piloting Sabre jets, fighters that fly close to the speed of sound, over Japan’s biggest and busiest island – Honshū.

Crossing into the civilian jet's flight path, the trainee pilot was unaware of the All Nippon flight 58. Getting closer, at the last second he was warned by Kuma to break off.

Ichikawa tried to break left to avoid the airliner but, despite the warning, it was too late.

The fighter’s right-wing ploughed into the tail wing of the passenger craft sending it out of control and putting it, and everyone on board, into a steep dive.

It broke up in mid-air, its debris smashing down around the town of Shizukuishi – all 162 people on board were killed.

His plane entering into a spin, Ichikawa was unable to eject and was forced to unbuckle his belt and jump out of the crashing jet himself.

Free of the fighter, he was able to activate his parachute and land safely.

TIME reported in 1971 that Ichikawa had just 21 hours of practice flying the Sabre and his jet didn't have radar.

Afterwards, he said: "I saw a civilian plane approach from the rear and felt a jolt in my tail."

Both fighter pilots were tried in court but both were let off a charge of involuntary manslaughter.

The instructor, Kuma, was given a three-year suspended sentence after he was found guilty of criminally negligent manslaughter. The conviction cost him his job.

According to information from the Flight Safety Foundation, Kuma had mistakenly left the training area, crossing into the flight path and taking his trainee with him.

Realising it had happened, he had to turn back to return to the training zone, crossing the path again.

Captain Kuma later said that such an incident was always likely to happen at some point "with civilian jets flying upstairs all the time and civilian propeller planes downstairs," TIME report.

Heads rolled higher up too – up the food chain the Director-General of the Defense Agency, Keikichi Masuhara, resigned along with Chief of the Air Staff General Yasuhiro Ueda.

At the time, the incident was the deadliest ever, holding the grim record for 13 years until the infamous Aeroflot Flight 217 claimed the lives of 174 air travellers.