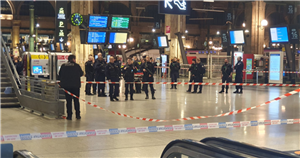 The incident took place in a Paris train station during rush hour at around 6:45am.

Reports claim that a police officer "used his weapon" to stop the man, with several people thought to have been hurt in the attack.

Vice-President in charge of mobility, transport infrastructure and ports in the Hauts-de-France Region, Franck Dhersin, said on Twitter in a translated statement: "Serious incident at the Gare du Nord in Paris where an individual fired shots! Traffic interrupted".

The Gare du Nord, officially Paris-Nord, is one of the seven large mainline railway station termini in Paris, France.

The incident has caused delays on the main lines for the station, impacting TER, RER and Ile-de-France trains.

Arrivals for the Gare du Nord are also understood to have been impacted.

News reports from TER Hauts-de-France claim that a police perimeter is now in place at the station but it continues to "operate normally".

French Interior Minister, Gérald Darmanin said: "An individual injured several people this morning at the Gare du Nord. He was quickly neutralized. Thank you to the police for their effective and courageous response."

The Huffington Post reports that the suspect has been arrested.

Writing on Twitter journalist Elise Bronsart said: "Knife attack in #garedunord … they evacuated an injured person in front of us and no one took out their phone to film".

She added: "The facts took place around 6:45 a.m. in the station. For an undetermined reason, the man injured several people with a bladed weapon. The police officers subdued him by slightly injuring him with a bullet, the same source added."

The comment came attached with a picture that appears to be of the scene, showing police tape and several officers.