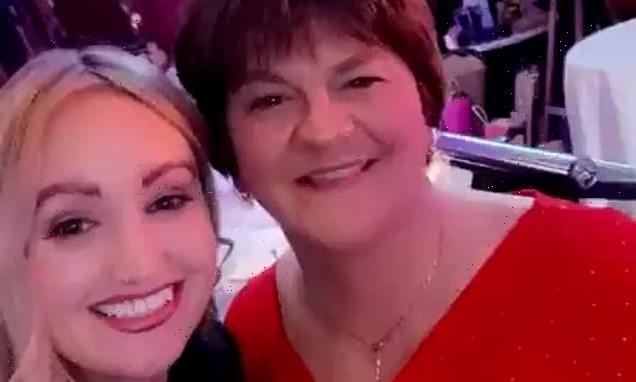 A video of a young woman singing the Wolfe Tones’ controversial Celtic Symphony standing next to Arlene Foster has caused outrage as former DUP leader says she is ‘very disappointed’.

The former first minister of Northern Ireland is filmed posing with a young woman at a Local Women Business Awards in the upmarket Europa Hotel in Belfast.

This comes just weeks after the Ireland women’s football team were forced to apologise for singing the pro-IRA chant, ‘Oh ah, up the ‘Ra’ in their dressing room.

The DUP leader previously described her experiences with the IRA as ‘traumatic’ after her father was shot by the group in 1979.

In footage that was shared online over the weekend, the young woman begins chanting the pro-IRA song, causing the former DUP leader to express discomfort. 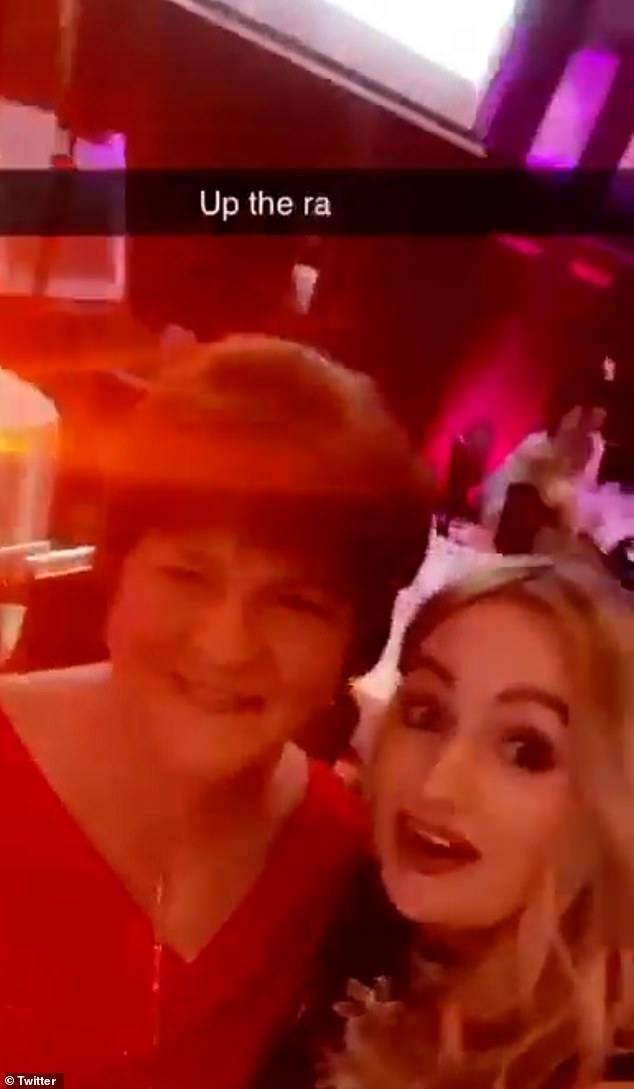 The young woman begins to chant the Wolfe Tones’ ‘Oh, ah, up the ‘Ra’ while standing next to former DUP leader Arlene Foster. Ms Foster said she had been left ‘very disappointed’ by the incident and invited the young woman to stand with her at her father’s graveside

Dame Arlene Foster said she had been left ‘very disappointed’ by the incident and suggested the young woman should join her at her father’s graveside to understand what the IRA had done, ‘before she was even born’.

Do you know this woman? Email us

Did you see this video on your social media channels? Do you know who this young woman is?

If you recognise this woman, email [email protected]

‘I’d like to bring her to Aghadrumsee graveyard where my father is buried. There she could hear what the ‘Ra’ was doing in Fermanagh before she was even born,’ she told the Belfast Telegraph.

‘It’s so sad that at an event to celebrate the success of local women that someone would try to celebrate the IRA while standing beside a victim of the IRA. It’s very disappointing,’ Ms Foster added.

Ms Foster’s father, John Kelly, a part-time police man in the Royal Ulster Constabulary, was shot in the head by the IRA when she was a teenager.

She previously told the BBC that: ‘They shot him in the head as he was closing in the cattle. He came crawling into the house, blood streaming down his face. We couldn’t stay in Roslea. I’d to move house and school – it was traumatic.’

The former DUP leader was also on a school bus that was bombed by the IRA in 1988. A girl sat near her on the bus was severely injured in the attack. 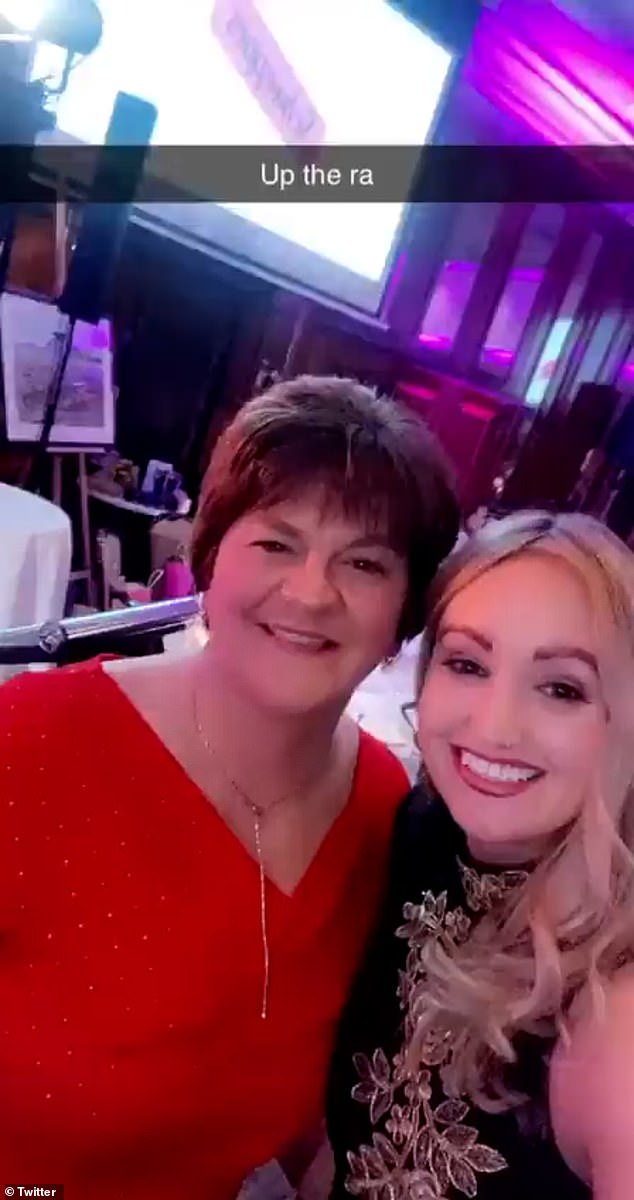 The unidentified young woman will be banned from future events, the organisers Local Women Magazine said, adding that they were ‘appalled’

The organisers of the event said they would ban the young woman and that they were ‘appalled’.

‘Local Women wishes to make it clear that it is appalled at the conduct of the person who did this and does not condone it in any way.

‘There were 540 guests at the event from all sections of the community and we are horrified at any distress this incident has caused.’ 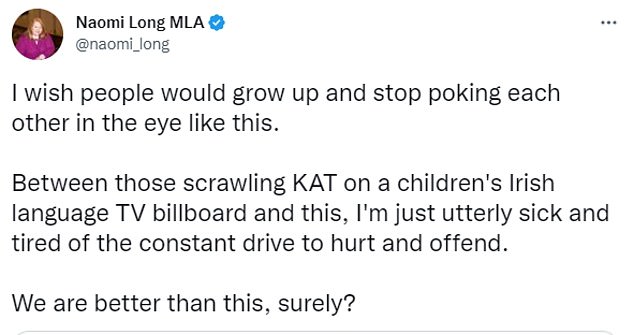 Senior politicians from Northern Ireland expressed their anger over the incident, with Naomi Long, leader of the Alliance Party, saying: ‘We are better than this, surely?’

Alliance Party leader Naomi Long called on people to ‘grow up’ and said she was ‘utterly sick and tired of the constant drive to hurt and offend’.

SDLP leader Colum Eastwood said on Twitter that he was ‘sick of this nonsense’.

‘Why do this? Can we not disagree decently? It serves no cause or community.’

‘What probably saddens and sickens me most is that the majority of those responsible for causing offence and deliberately causing hurt is that almost none of them grew up through the evil dark destructive days they glorify.’

This follows recent controversy after the Ireland women’s football team were forced to apologise after singing the pro-IRA song in the changing room after their World Cup qualification.

After footage taken in the Hampden Park dressing room in Glasgow circulated on social media, the Football Association of Ireland, and the team’s manager Vera Pauw, apologised.

Pauw, who is Dutch, said the player who posted the video on their social media was in tears after the row, and added the incident ‘does put a shadow’ over the team’s achievement.

During a grilling on Sky Sports, player Chloe Mustaki denied that her teammates needed to be educated about Irish history to presenter Rob Wotton.

She said: ‘Look, we are incredibly embarrassed in this moment in time, didn’t mean any hurt on our end so we do really apologise for that.

‘I think we need to learn in these moments to be better and to do better. You know, we’ve all been brought up knowing a lot about Irish history.

‘So, we just need to be better in moments like this, and we recognise that absolutely on our end.’

Do you recognise the woman with Arlene Foster? Did you see her original post? Email [email protected]

Who is Arlene Foster?

Dame Arlene Isobel Foster, 52, is a British broadcaster and politician.

She was born in 1970 in Enniskillen and moved in 1979 to Lisnaskea after an IRA attack on her family home.

Her father, John Kelly, was shot in the head by the IRA, an incident Foster said left her ‘traumatised’.

Foster was on a school bus that was targeted by the IRA nine years later.

The girl beside her was badly injured by the bomb that was planted on the bus because the driver was a soldier in the Ulster Defence Regiment.

She graduated from Queen’s University Belfast with a law degree and was active in the Ulster Unionist Party as a student.

She notably refused to travel to Dublin in 2016 for the centenary celebrations of the 1916 Easter Rising, describing the rebellion as ‘an attack on democracy’.

During Theresa May’s minority government after the UK general election in 2017, Foster’s DUP entered a confidence and supply agreement with the Conservative party.

Foster was forced to step down as First Minister and DUP leader after a vote of no confidence in 2021.

She embarked on a media career after leaving politics and regularly appears on GB News. She is a columnist at Local Women Magazine.

It was announced in October 2022 that she would be elevated to the House of Lords, sitting as a crossbench peer. She was created Baroness Foster of Aghadrumess on November 9, 2022.

She is married to Brian Foster and has three children.