The largest cryptocurrency, just like the rest of the crypto industry, remains highly susceptible to downside risk as it continues to deal with the fallout from the implosion of exchange FTX.

Contagion is the world on everyone’s lips as November grinds on — just like the Terra LUNA collapse earlier this year, fears are that new victims of FTX’s giant liquidity vortex will continue to surface.

The stakes are decidedly high — the initial shock may be over, but the consequences are only just beginning to surface.

These include issues beyond just financial losses, as lawmakers attempt to grapple with FTX and place renewed emphasis on urgent Bitcoin and crypto regulation.

With that, it is no wonder that price action across cryptoassets is weak at best — and there are plenty of voices arguing that the worst is still to come.

Cointelegraph takes a look at some of the major factors to bear mind this week when it comes to BTC price performance.

As clouds swirl over the fate of FTX’s executives and ex-CEO, Sam Bankman-Fried, commentators and crypto investors alike are wondering where contagion will strike next.

Sentiment suggests that everyone is expecting the worst. A case in point comes in the form of Genesis Trading, part of the Digital Currency Group (DCG) conglomerate, which last week halted payouts at its crypto lending arm.

This not only set off a string of rumors over Genesis’ solvency, but also over DCG’s future. Reassurances from executives have failed to stem the narrative, which has also focused on the largest institutional Bitcoin investment vehicle, the Grayscale Bitcoin Trust (GBTC).

Thus, over the weekend, a growing debate over GBTC mushroomed into a full blown panic over financial buoyancy.

As Cointelegraph reported, this was made worse by Grayscale refusing to provide address details to prove its BTC reserves, allegedly for reasons related to security.

Suspicions over a $1 billion owed by DCG to Genesis add to the melting pot of misgivings.

At the same time, some well-known investors have added to their GBTC positions in recent weeks.

“Is the next black swan GBTC already around the corner?” trading resource Stockmoney Lizards thus queried on Twitter.

“GBTC holds ~648k BTC.Grayscale discount off to a record 43% as FTX spreads great uncertainty.Lots of hysteria in the market and everyone is looking for the 10k Bitcoin reason. Keep calm, bear markets end in the winter!”

Further contention is focused on GBTC’s discount to the Bitcoin spot price, which is now almost at 50% for the first time ever.

Arthur Hayes, former CEO of exchange BitMEX, even flagged a blog post from July which ventured that DCG had worked with defunct trading firm Three Arrows Capital (3AC) to “extract value from the GBTC premium.”

“To all questioning $GBTC Grayscale holdings: Why not short $COIN @coinbase ?” he ventured on Twitter.

“They are the custodian & they would be the ones committing fraud. COIN is 10x the size of GBTC; stock would go to 0 and execs would go to prison. You would be wealthy and go on vacation.”

Mike Belshe, CEO of BitGo, meanwhile placed the blame for GBTC’s situation — and FTX — firmly at the door of United States regulator, the Securities and Exchange Commission (SEC).

“By failing to create an ETF for bitcoin, the SEC: – allowed the grayscale -> GBTC trade to rip retail for 5+yrs – created the GBTC negative premium – forced most crypto trading outside US jurisdiction – let FTX’s fraud hit millions of Americans it shouldn’t have,” he summarized in part of a Twitter discussion.

In related FTX developments, hacked funds from the exchange are on the move, with tens of thousands of Ether (ETH) converted to BTC this weekend.

Bitcoin is understandably between a rock and a hard place under the current circumstances.

BTC/USD has failed to catch a break since FTX blew up, testing levels not seen in two years and fielding growing calls for further capitulation.

The question for traders and analysts is how far that capitulation could go.

The situation was not helped by the latest weekly close, Bitcoin’s weakest since November 2020 at around $16,250, with fresh losses appearing since, data from Cointelegraph Markets Pro and TradingView shows. 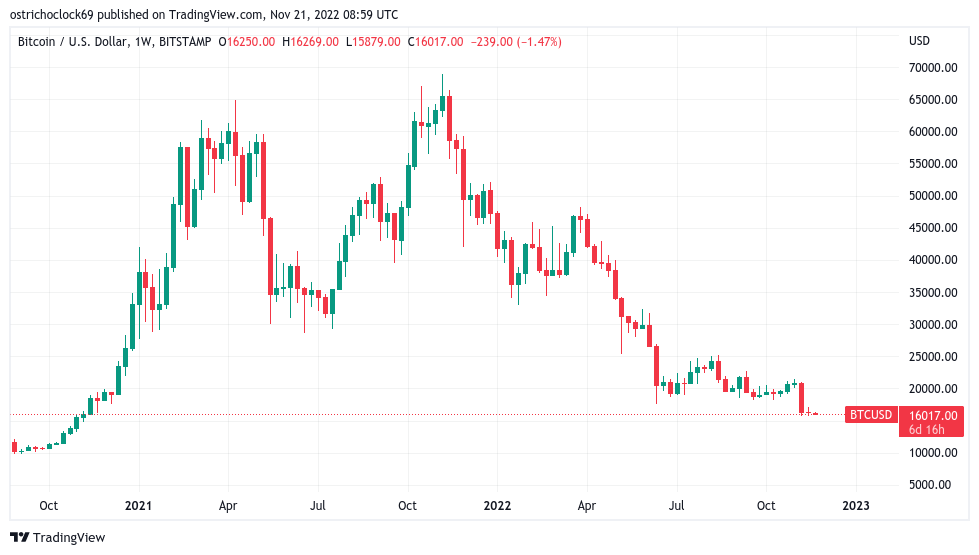 “Volume decreasing. Bollinger Bands squeezing on many time frames. Something has to give,” analyst Matthew Hyland warned before the close.

A look at volatility on the daily chart showed Bollinger Bands expanding with price testing the lower band at the time of writing on Nov. 21 — a suggestion that lower levels amid increased volatility are to come. 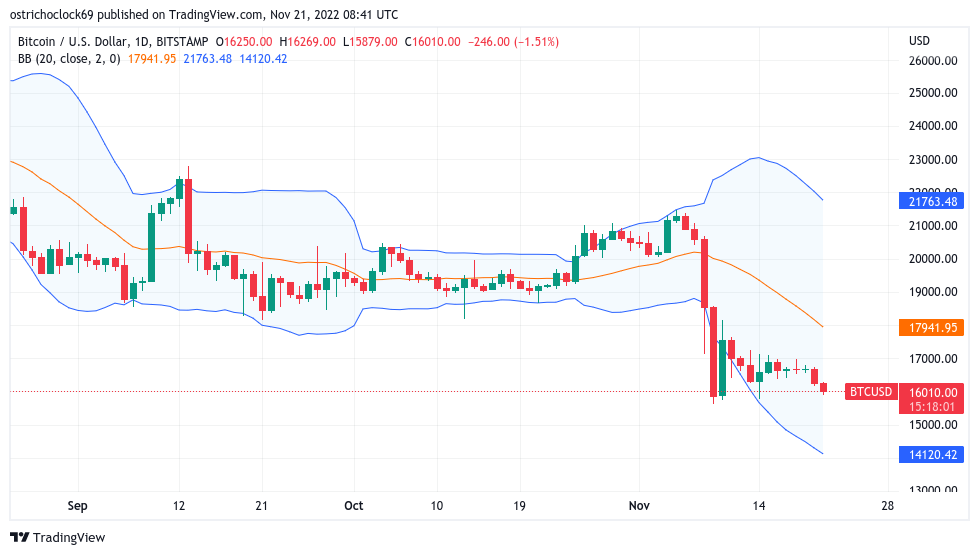 Short-term upside targets nonetheless included a return to the latest CME Bitcoin futures gap at around $16,500.

Fellow trader and analyst Crypto Tony likewise called for restraint over bearish sentiment on BTC/USD despite the pair trading below $16,000.

“Looking for a close below the range lows before i start getting excited to short,” he told Twitter followers on the day.

“Right now we are still in the same boat as the last few days actually …. Patience.”

Aksel Kibar meanwhile took a more conservative outlook, warning that history may be due to repeat itself in the form of Bitcoin repeating losses from earlier in the year.

One of two charts uploaded to Twitter on the day he described as a “Reminder on the latest consolidation and the possibility of it becoming a bearish continuation chart pattern.”

Kibar had previously argued that “the longer price remains below 18K the higher the chances” of a return to $13,000. 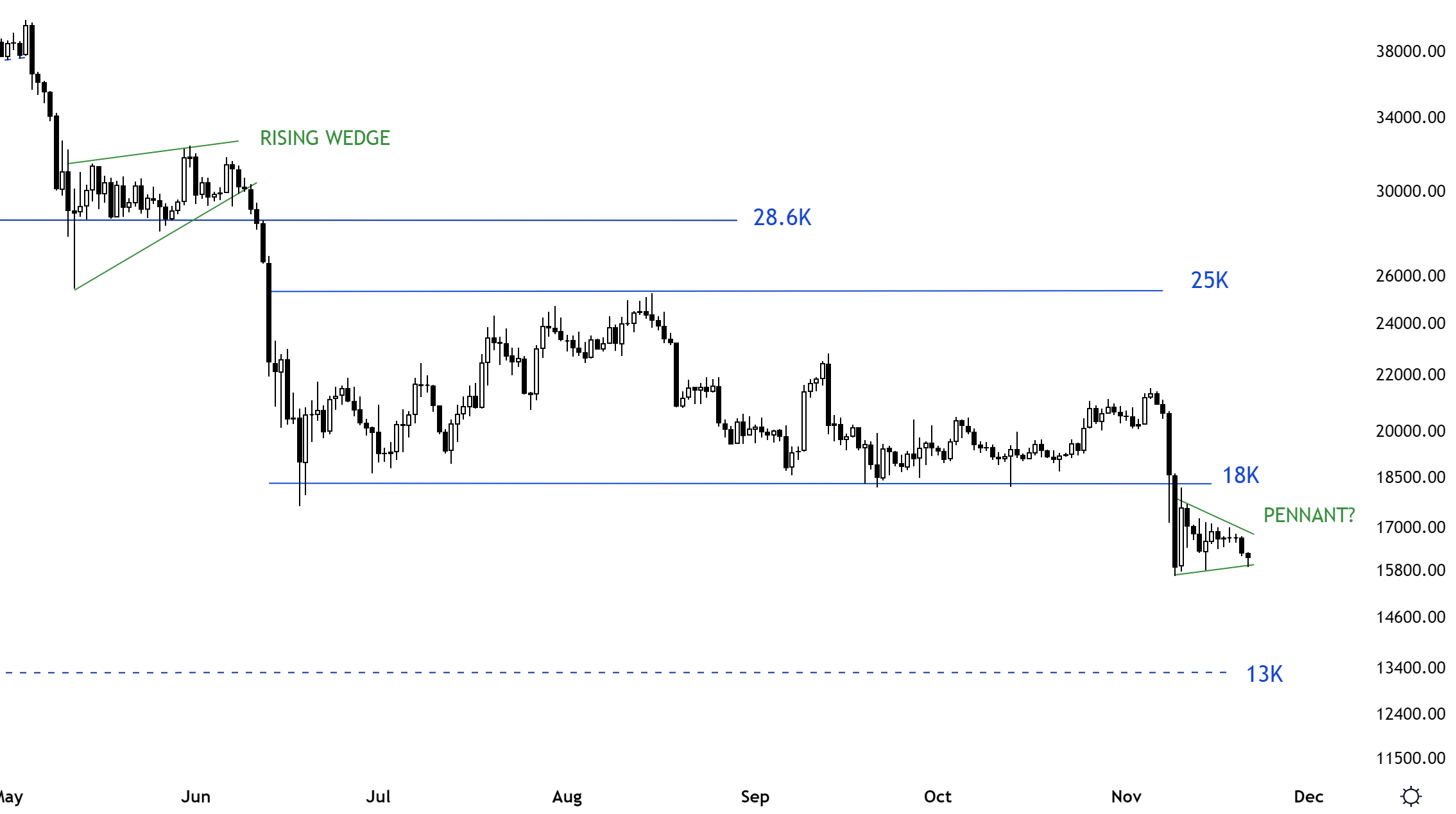 While inflation has been the major topic of discussion for anyone involved in risk assets in 2022, for crypto, the issue has taken a back seat.

FTX and its contagion has pressured price performance more acutely than the year’s macro triggers on short timeframes, but behind the scenes the global economic picture is providing interesting signals.

Inflation in the U.S. was already seen to be retracing, but new figures from Europe suggest that the Eurozone’s biggest economy, Germany, is now following suit.

Producer Price Index (PPI) data released on Nov. 21 came in below expectations and even went into retreat, becoming negative rather than growing further. 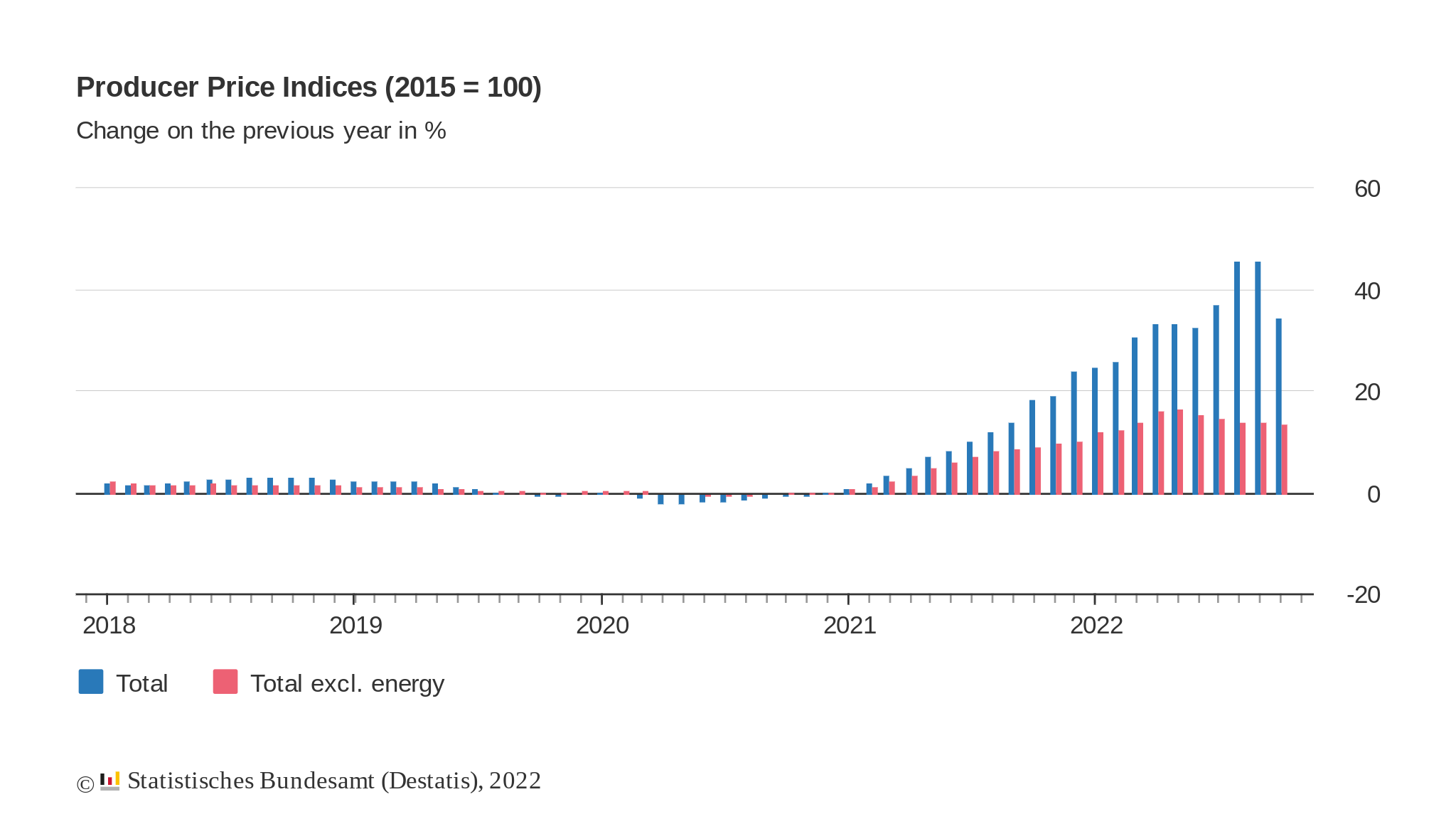 Should the inflation picture change dramatically for the better, the chances of a risk asset rebound should increase in step. The U.S. dollar meanwhile continues to struggle, with prior twenty-year highs still firmly out of reach.

For popular analytics resource Game of Trades, it is “game over” for the U.S. dollar index (DXY), which broke through its 100-day moving average for the first time since April 2021. 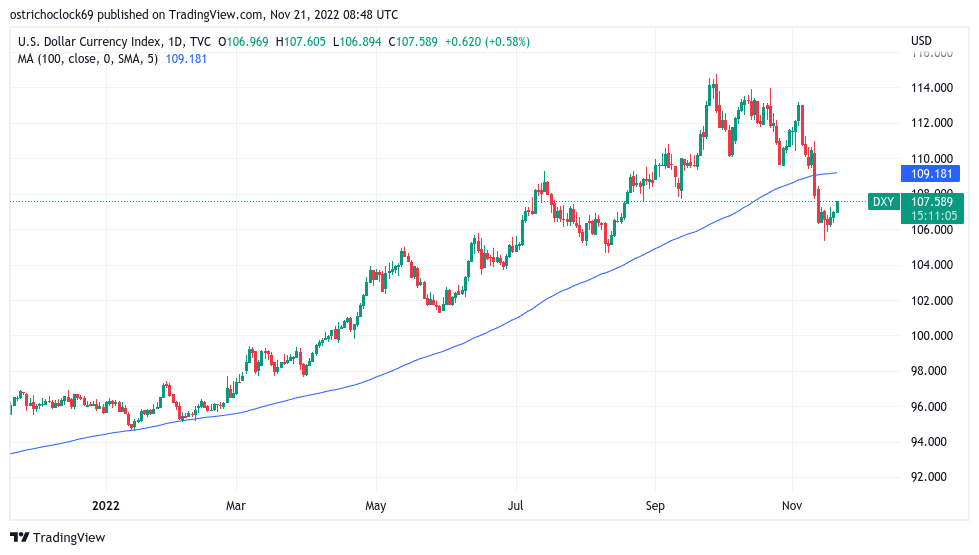 Even all-time highs, rather than lows, are having trouble gaining acceptance among Bitcoiners in the current climate.

Under the hood, Bitcoin has been busy expanding its network security — but misgivings about the numbers persist.

At the latest automated readjustment on Nov. 20, Bitcoin network difficulty increased by 0.51% to hit a new record high. 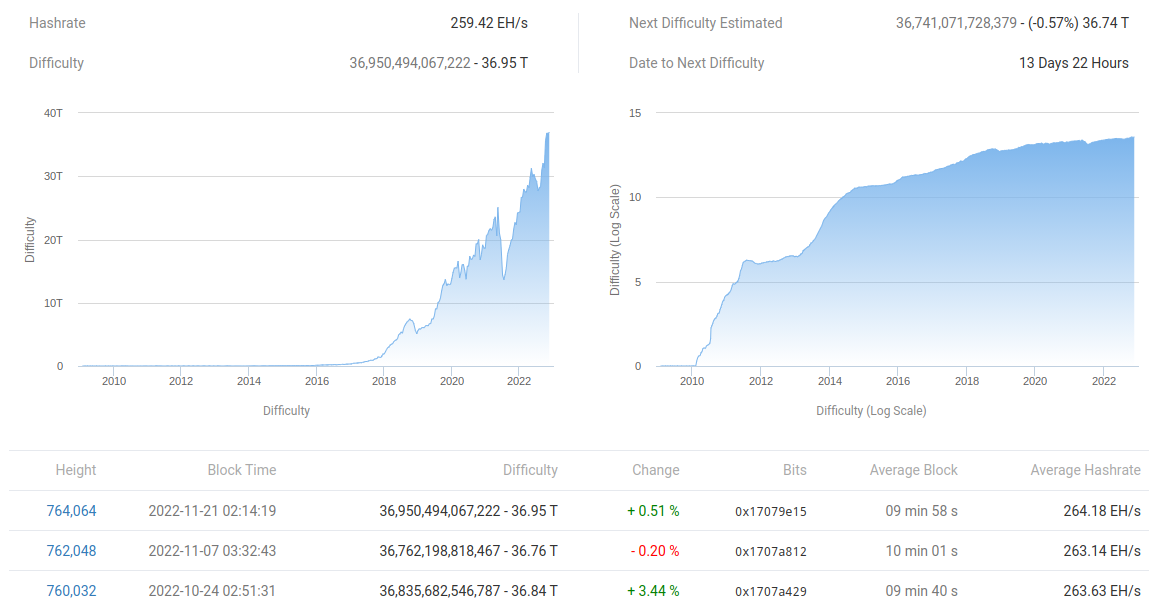 Mining difficulty is a reflection of the competition among miners. Currently, the metric is rising despite BTC price action falling, which in turn suggests that some entities are deploying more hashing power to the network and are able to overlook decreasing profit margins.

For less resilient, however, “capitulation” could ensue, some warn. Reacting to the new difficulty high, Colin Talks Crypto called it the “perfect storm” for miner upheaval.

“Only the strongest will survive this extreme pressure,” he added.

Despite this, miners have been selling less relative to their one-year average in recent days, indicating a potential reduction in immediate need to reduce reserves. 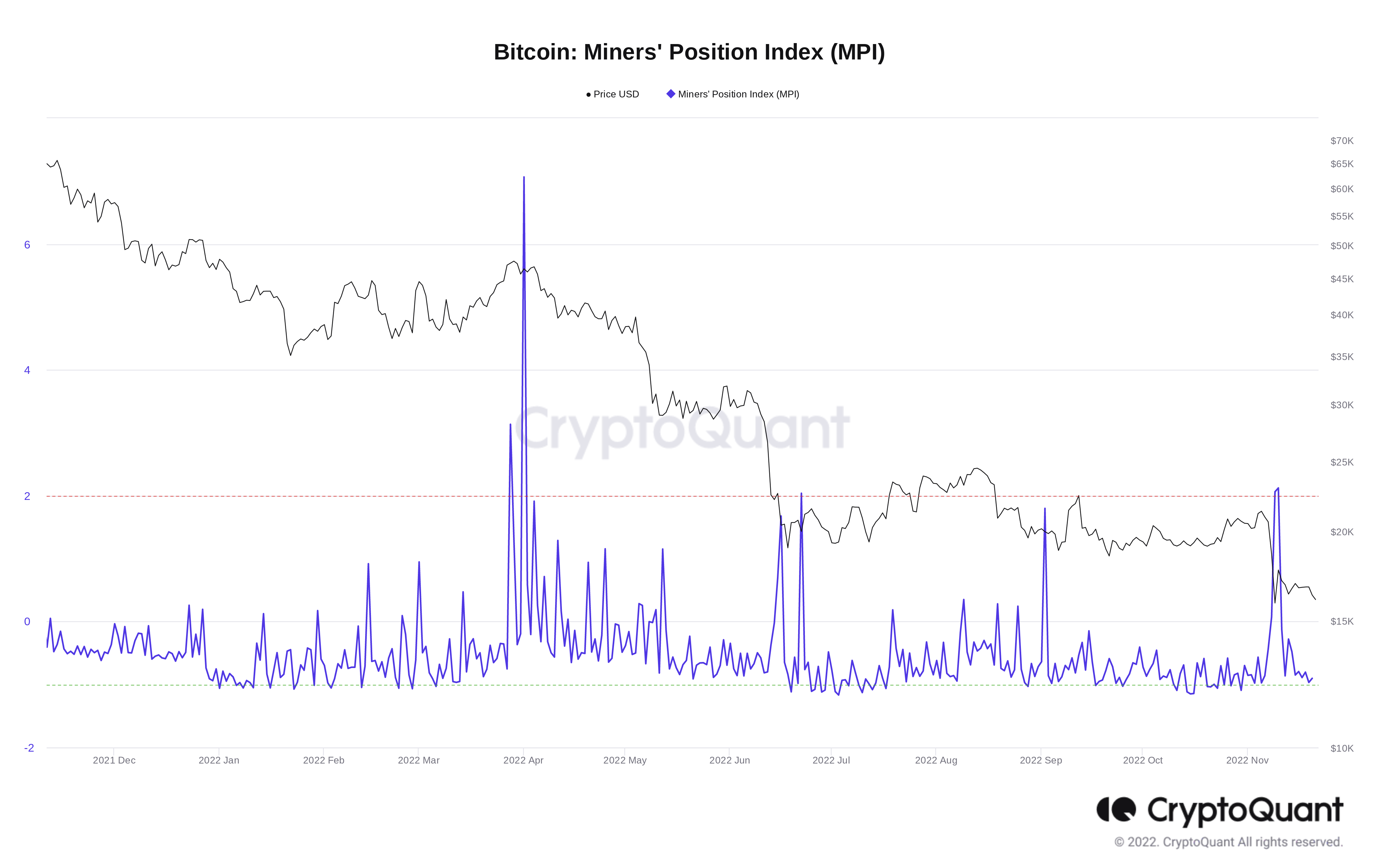 Those around during the last crypto bear market are buckling up for a long and drawn-out return to glory.

BTC/USD is now a suitable number of weeks past its latest all-time high to put in a new macro low, popular Twitter account Moustache shows. 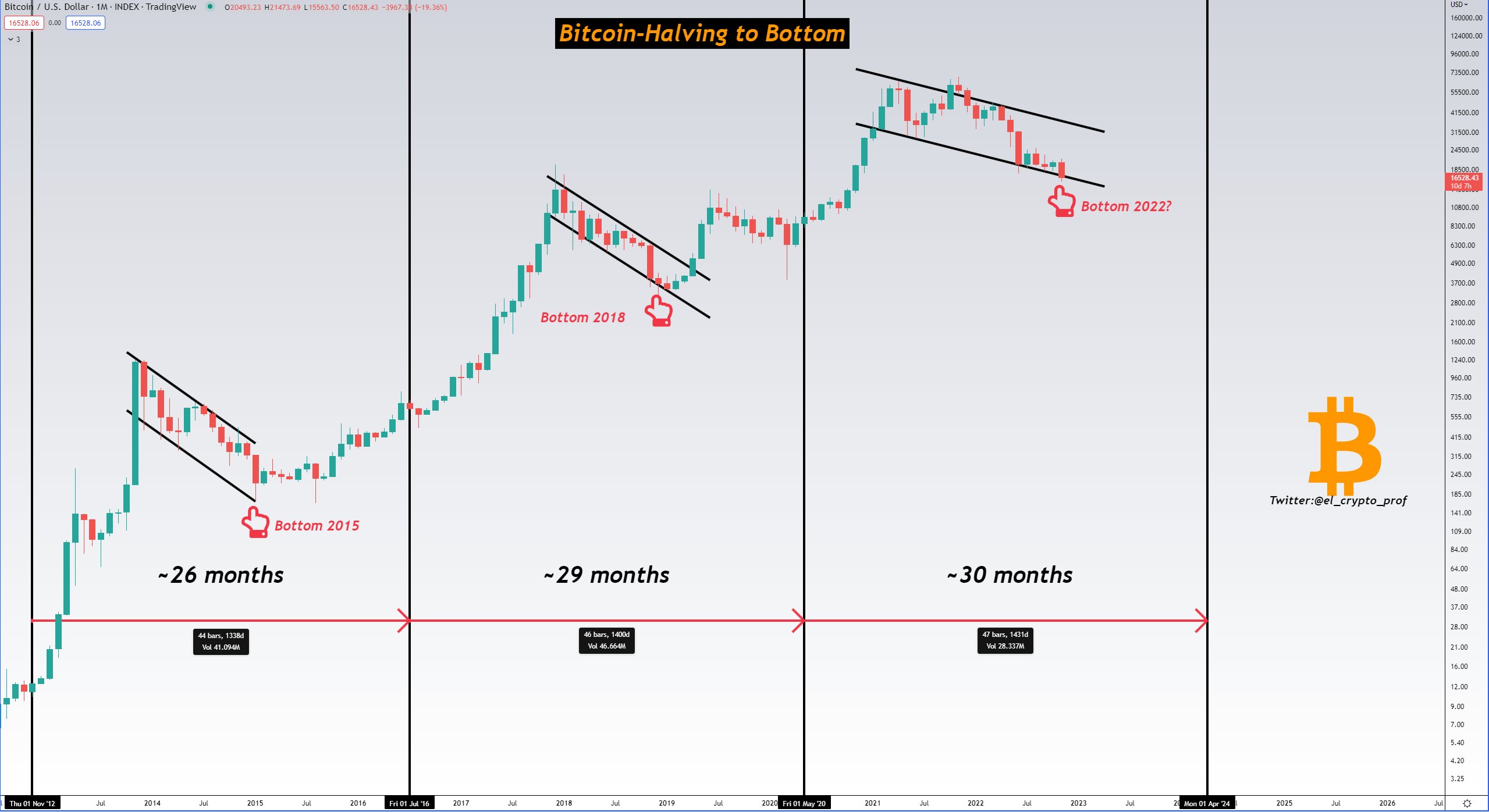 “Everyone is wondering where the Bitcoin bottom might be. The MVRV Z-Score has always proven to be very accurate in the past and could answer this question,” he wrote alongside a screenshot of the MVRV-Z Score chart.

“Whenever the Z-Score fell out of the green channel, the bottom was in for $BTC. We’re very close.”

Comparing timeframes from four years ago, when BTC/USD bottomed at $3,100 in December 2018, fellow account Bleeding Crypto meanwhile said that price action is nonetheless only just beginning its bottoming process.

“Did you know that it took 5 weeks to finally hit the bottom once we started to capitulate in 2018?” he revealed.

“Then it took 4 month of BORING PA before we saw the first God candle. We barely started week 2 today. This is a marathon, not a sprint. Get comfortable, it’ll be a while.” 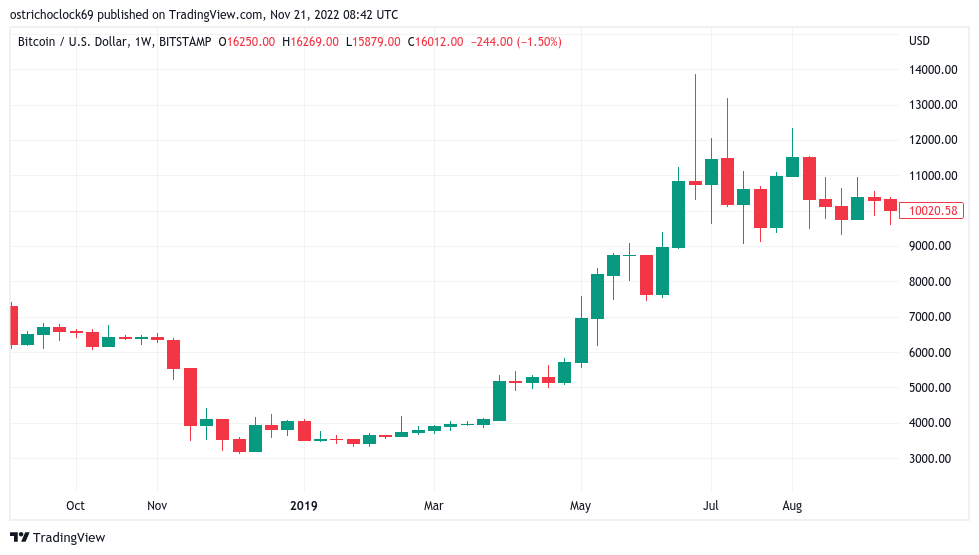 21/11/2022 Business And Finance Comments Off on GBTC next BTC price black swan? — 5 things to know in Bitcoin this week
Markets