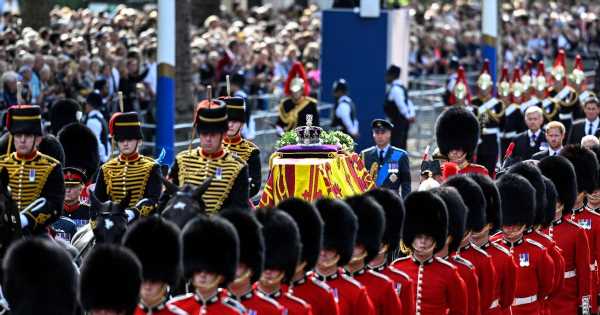 Mourners are set to gather under a "dark cloud" as they say goodbye to Queen Elizabeth II, according to weather experts.

Despite the bleak weather conditions predicted by weather experts, there's a possibility that the sun will break through the clouds at Buckingham Palace, the Daily Mirror reports.

Tens of thousands are expected to fill the streets for the Queen's funeral in London on Monday (September 19).

According to the Met Office, the day of the funeral will begin with spells of sunshine but as the service goes into the afternoon, clouds will start to form.

Weather expert Simon Partridge said conditions should be decent with sunny spells at times during the day.

"Being outside, it will be pretty decent conditions. It won’t be too hot or too cold and the main thing is everybody should stay dry as well," he said.

"There will be some cloud around but with some bright, sunny spells at times.

"It might be a touch cooler than the average for this time of year, so we are looking at 18 or 19 degrees.

"That's not cold by any stretch but not as warm as you would expect for early September."

With the likes of light winds, cloudy spells and streaks of sun set to hang over the Monday sky, Mr Partridge said there is a chance less cloud is experienced on the day of the royal funeral.

"There is a chance of seeing some sunshine at times," he added.

"It is quite a way off but nearer the time, it may turn out that there is a little less cloud than the models are showing at the moment."

'You can leave your tributes to Queen Elizabeth II here.'