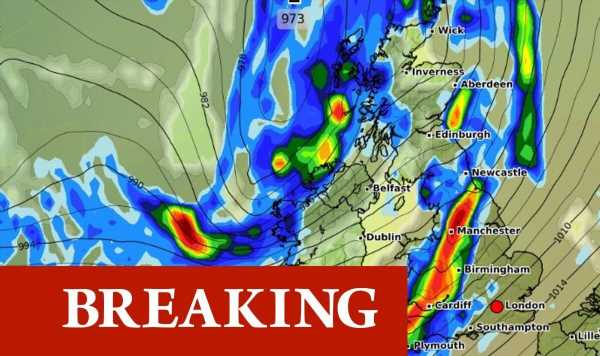 BBC Weather: Wet weather forecasted for most regions in the UK

A second weather warning has been issued for this week by the Met Office – warning of strong winds belting across several western coastal regions of the UK. The warning begins at 7am on Wednesday, November 2 with a current predicted expiry of 6pm – making areas such as south west Scotland, Cumbria and western Wales subjected to blustery conditions for up to 11 hours. A Met Office statement said: “A spell of very strong southerly or southwesterly winds will affect some western coastal areas during Wednesday. Gusts of 55-65 mph are expected, especially in exposed coastal locations, with some sudden strong gusts of wind possible at times.

“Some further heavy rain is also likely during Wednesday, especially across parts of south west Scotland, Cumbria and western Wales.” The forecaster adds that such conditions will cause delays to public transport and on roads.

High sided vehicles on exposed routes will be subject to delays for safety purposes and that there may be some short term loss of power. Exposed coastal areas will also be subjected to spray and large waves.

These include Blackpool, Cumbria, Lancashire, Merseyside,County Antrim and County Down in Northern Ireland, Dumfries and Galloway in south west Scotland and South Ayrshire in Strathclyde.

In Wales the areas included are Carmarthenshire, Ceredigion, Conwy, Gwynedd, Isle of Anglesey, Pembrokeshire and Swansea.

It will be the second weather warning in place for Northern Ireland, as one is already active today until 10pm for heavy rain which is predicted to bring flooding and some impacts to travel.

The Met Office said: “A band of rain will move east across Northern Ireland during Monday, possibly becoming slow moving during the afternoon and evening.

“Some heavy rain is expected at times, with 10-20 mm of rain falling fairly widely, whilst a few places may receive around 40 mm. There is uncertainty in the extent of the larger rainfall totals, but given that the ground is already saturated after recent heavy rain, even the lower totals may produce some flooding impacts.”

In terms of what to expect it added that residents should be wary of flooding on roads, and surface spray – making journey times longer. It also said bus and train services may experience delays.

Flooding of a few homes and businesses is likely, the forecaster added. Tomorrow (November 1), Thursday and Friday appear to be the only days this week where no warnings have been issued.

The Met Office’s UK weather outlook from this Wednesday into next week says: “Continuing unsettled with all areas seeing rain at times, locally heavy, though some brighter interludes for most too. Often windy with gales around coasts, and perhaps more widely on Wednesday.”

Looking at the first full week of November, unsettled conditions are expected to stay for many, as the long range forecast continues: “The UK can expect to see a continuation of unsettled weather throughout this period, with widely wet and windy conditions.

“Thick cloud and rain reach western parts on Friday, then through the weekend, low pressure to the northwest contrasts with higher pressure to the south and brings a changeable westerly regime for the UK.

“This will see spells of rain or showers for many, heavy at times, especially in the west and northwest. Bright spells are possible at times, most likely in the southeast.

“These unsettled conditions will persist for the remainder of the period. It will be windy throughout with generally mild temperatures.

“Coastal and hilly areas may expect gales, with particularly strong winds to the lee of high ground.”