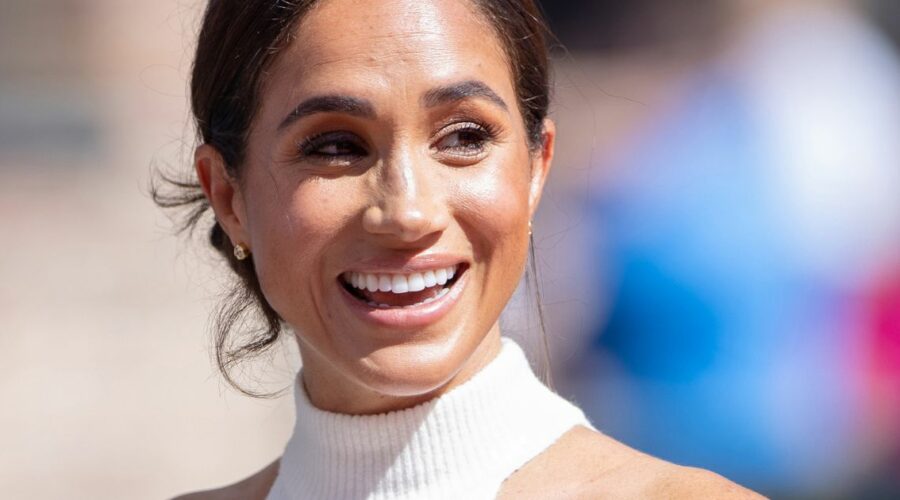 Meghan Markle's touching words about the late Queen today need to be "followed by constructive attitudes," a royal expert claimed.

Today the Duchess of Sussex spoke to Variety Magazine and broke her silence on the monarch's death last month, fondly remembering Her Majesty's "legacy [she] was able to leave on so many fronts."

Meghan said: "Certainly, in terms of female leadership, she is the most shining example of what that looks like. I feel deep gratitude to have been able to spend time with her and get to know her.

READ MORE: Meghan Markle says her and Harry's LA life is 'reverse of what she went through in UK'

"It’s been a complicated time, but my husband, ever the optimist, said, 'Now she’s reunited with her husband.'

"I’ve reflected on that first official engagement that I had with her, how special that felt. I feel fortunate. And I continue to be proud to have had a nice warmth with the matriarch of the family."

The Duchess' moving words may have touched hearts, but royal expert Richard Fitzwilliams now says she and Prince Harry now need to adopt "constructive attitudes" following the monarch's death and that they should try to follow in her footsteps.

Fitzwilliams told the Daily Star: "Meghan has rightly paid tribute to the Queen in the interview [with Variety].

"Throughout her 70-year reign, the Queen believed in a strong monarchy, which served the people, which she did so brilliantly.

He added that the Sussexes' current and upcoming projects, including Harry's long-awaited memoir and their hotly anticipated Netflix show, may need to be reevaluated as a result.

He said: "This would apply to Harry’s memoir and to their forthcoming Netflix documentary.

"The Queen was highly admired in the United States and the Sussexes would also be respected if they took a more constructive attitude to the monarchy."

Meghan also revealed in the interview that the couple feel "energised and excited" about their creative projects following the monarch's death, and show no sign of slowing down.

She said: "In big moments in life, you get a lot of perspective.

"It makes you wonder what you want to focus your energy on. Right now, we feel energised and excited about all of the things we’ve been building toward. We’re also focused on our foundation. So much of the work we do includes the philanthropic space."

Meghan isn't the first of the Sussexes to speak out about the Queen's passing on September 8 – Harry took to the official Archewell website to post a statement on his grandmother's death, Cosmopolitan reports.

He wrote: “Granny, while this final parting brings us great sadness, I am forever grateful for all of our first meetings—from my earliest childhood memories with you to meeting you for the first time as my commander in chief to the first moment you met my darling wife and hugged your beloved great-grandchildren.

"I cherish these times shared with you and the many other special moments in between.”