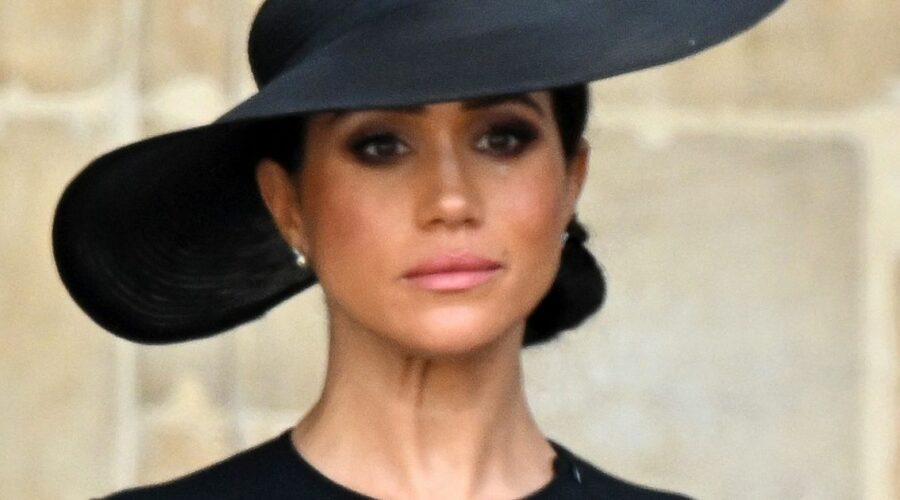 Meghan Markle's funeral outfit was filled with secret touches that honoured the Queen, it has been revealed.

The Duchess of Sussex ensured her entire ensemble paid tribute to Her Majesty as she supported her husband Prince Harry at the service in Westminster Abbey.

Meghan dressed elegantly in her fitted outfit as she attended both the funeral and the committal service today ( September 19 ).

She decided to wear the black version of a midi cape dress by Stella McCartney that she previously sported at a concert at the Royal Albert Hall in 2018, for the Queen's 92nd birthday celebrations.

Meanwhile, her wide-brimmed translucent asymmetric hat, which she styled with a chignon bun, was the black version of the same headpiece she wore to the Queen's Platinum Jubilee earlier this year.

In June, the Duchess donned the hat during the service of thanksgiving, which was held at St Paul's Cathedral, reports OK!

Her black gloves were also thought to be in tribute to the late monarch as she was never seen without a pair on as she attended royal engagements.

But it was her jewellery that held the most sentimental meaning as her hair 'do perfectly showed off her diamond and pearl drop studs which had been gifted to her by the late monarch during an engagement they did together in 2018.

The beautiful jewellery is thought to be a smaller version of the earrings that the late Queen tended to wear every day.

Meghan has also worn the pearls, which are no doubt now even more precious to her, when she attended a ceremony at Westminster Hall after the Queen's coffin had been transported from Buckingham Palace.

The Duchess revealed the touching story behind the beautiful jewellery during her landmark 2021 interview with Oprah Winfrey alongside husband Prince Harry.

She said: "The Queen, for example, has always been wonderful to me. I mean, we had our first joint engagements together. She asked me to join her. We had breakfast together that morning, and she'd given me a beautiful gift, and I just really loved being in her company."

Revealing the details of the present, she said: "She gave me some beautiful pearl earrings and a matching necklace."

During the State Funeral earlier today, Meghan was seen overcome with emotion as she joined members of the Royal Family at Westminster Abbey.

The Duchess of Sussex was seen wiping a tear from her eye in emotional pictures as the procession left for Wellington Arch while members of the Firm watched on.

She dabbed her eye as The Queen’s coffin, followed by the King, the Prince of Wales, the Duke of Sussex, Duke of York and the Princess Royal, began its procession towards Wellington Arch.