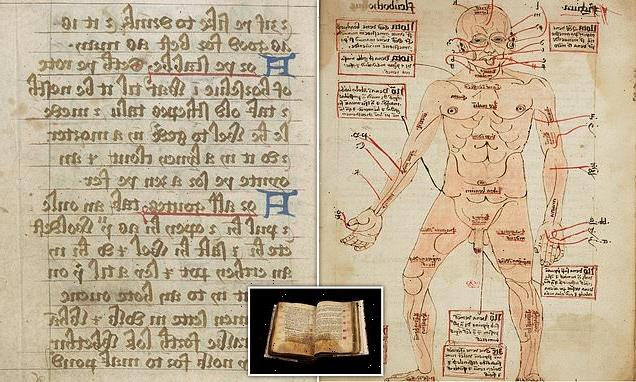 Eating roasted puppy stuffed with snails and sage, and grinding baked owl into powder: Thousands of bizarre medieval recipes for treating ailments including gout will be digitised for the first time

Curious medieval cures, including a treatment for gout that involved baking an owl then grinding it into a powder, are to be shared with the public online by Cambridge University Library.

Another unusual recipe, also intended to tackle gout, instructed readers to stuff a puppy with snails and sage royal then roast it over a fire, with the rendered fat used to make a salve.

More than 180 medieval manuscripts are to be digitised, catalogued and conserved over the next two years as part of the Curious Cures in Cambridge Libraries project.

The manuscripts, containing around 8,000 unedited medical recipes, mostly date from the 14th or 15th centuries, with some examples from earlier, the oldest being 1,000 years old.

The treatment involving the owl would have also seen the bird get covered in salt, before its ground down remains were mixed with fat from a boar.

The mixture would then have been applied to the sufferer’s body in the hope that it would cure gout.

Another recipe, for treating cataracts, recommended taking the gall bladder of hare, mixing it with honey and then applying it to the eye with a feather.

The texts are from the collections of the University Library, Fitzwilliam Museum and a dozen Cambridge colleges. 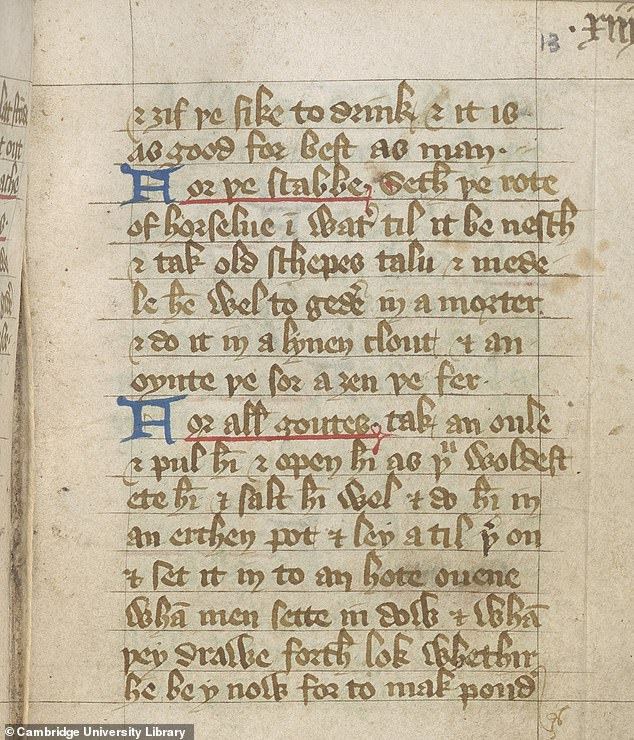 Curious medieval cures, including a treatment for gout that involved baking an owl then grinding it into a powder, are to be shared with the public online by Cambridge University Library. Above: The recipe involving the owl 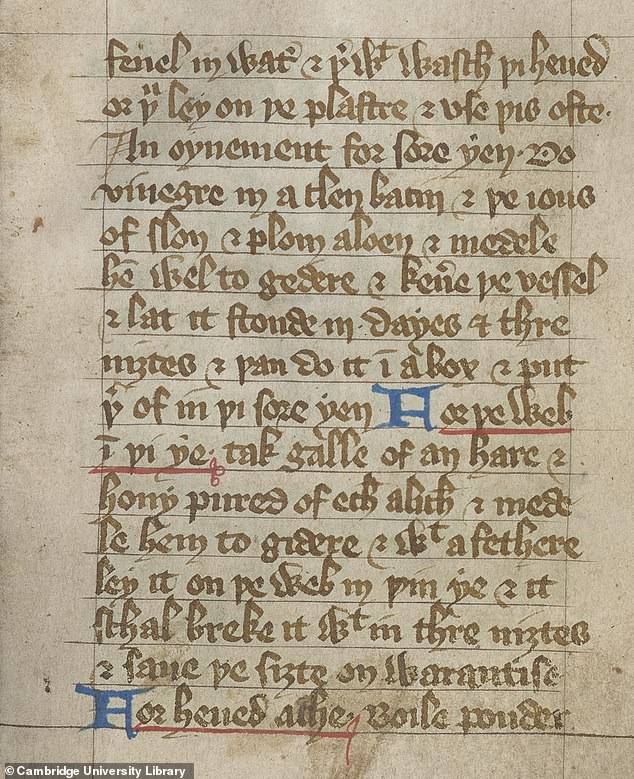 Another recipe (pictured), for treating cataracts, recommended taking the gall bladder of hare, mixing it with honey and then applying it to the eye with a feather 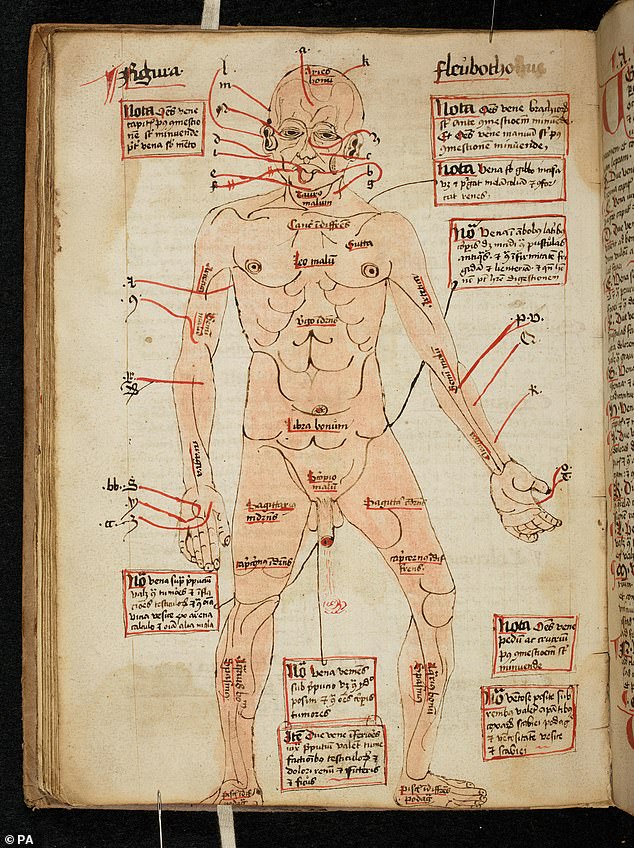 A digitised diagram from Cambridge University Library showing a naked man and the veins that could be opened for blood-letting, which was then a common treatment for various ailments

The gout treatment that involved baking an OWL

For all gouts. Take an owl

and pluck him and open him as you would

to eat him, and salt him well and place him in

an earthenware pot and put a tile thereon (i.e. over the mouth of the pot)

and place it in a hot oven

when men put in dough (i.e. for making bread), and when

they bring it out, look whether

the owl is ready to make powder

from or else let it stand until he is.

Then, beat the owl to powder and temper it

with boar’s grease and anoint

the sore (part of the body) with it (while sitting) by the fire.

For all goutes tak an oule

and pul him and open him as thou woldest

ete him and salt him wel and do him in

an erthen pot and ley a til theron

and set it in to an hote ovene

they drawe forth lok whethir

of and elles let stonde til he be

than bete it to pouder and tempere it

with boris gres and anoynte

the sor bi the fer

James Freeman, leading the £500,000 Wellcome-funded project, said: ‘For all their complexities, medieval medical recipes are very relatable to modern readers.

‘They show medieval people trying to manage their health with the knowledge that was available to them at the time – just as we do.

‘They are also a reminder of the pain and precarity of medieval life, before antibiotics, before antiseptics and before pain relief as we would know them all today.

‘Other treatments include salting an owl and baking it until it can be ground into a powder, mixing it with boar’s grease to make a salve, and rubbing it on to the sufferer’s body to cure gout.

‘To treat cataracts – described as a ‘web in the eye’ – one recipe recommends taking the gall bladder of a hare and some honey, mixing them together and then applying it to the eye with a feather over the course of three nights.’

A team of project cataloguers, under the supervision of Dr Freeman, will prepare detailed descriptions of the text’s contents, material characteristics, origins and provenance, and place the recipes in their material, intellectual and historical contexts.

The results of the project – high-resolution digital images, detailed descriptions and full-text transcriptions – will be freely available online on the Cambridge Digital Library, opening up the collections to researchers around the world.

‘These manuscripts provide brilliant insights into medieval medical culture, and the recipes they contain bring us close to the interactions between patient and practitioner that took place many centuries ago,’ Dr Freeman said.

‘Until now, such texts have been quite difficult for researchers and members of the public to access and analyse.

‘A bewildering array of ingredients – animal, mineral and vegetable – are mentioned in these recipes.

‘There are herbs that you would find in modern-day gardens and on supermarket shelves – sage, rosemary, thyme, bay, mint – but also common perennial plants: walwort, henbane, betony and comfrey.

‘Medieval physicians also had access to and used a variety of spices in their formulations, such as cumin, pepper and ginger, and commonly mixed ingredients with ale, white wine, vinegar or milk.’

The recipe for treating cataracts said the treatment was ‘guaranteed’ to cure the condition.

Some of the entries highlight the violence of medieval life, such as how to determine whether a skull has been fractured after a blow from a weapon, how to staunch bleeding and how to set broken bones.

‘Behind each recipe, however distantly, there lies a human story: experiences of illness and of pain, but also the desire to live and to be healthy,’ said Dr Freeman.

‘Some of the most moving are those remedies that speak of the hopes or tragic disappointments of medieval people: a recipe “for to make a man and woman to get children”, to know whether a pregnant woman carries a boy or a girl, and “to deliver a woman of dead child”.’ 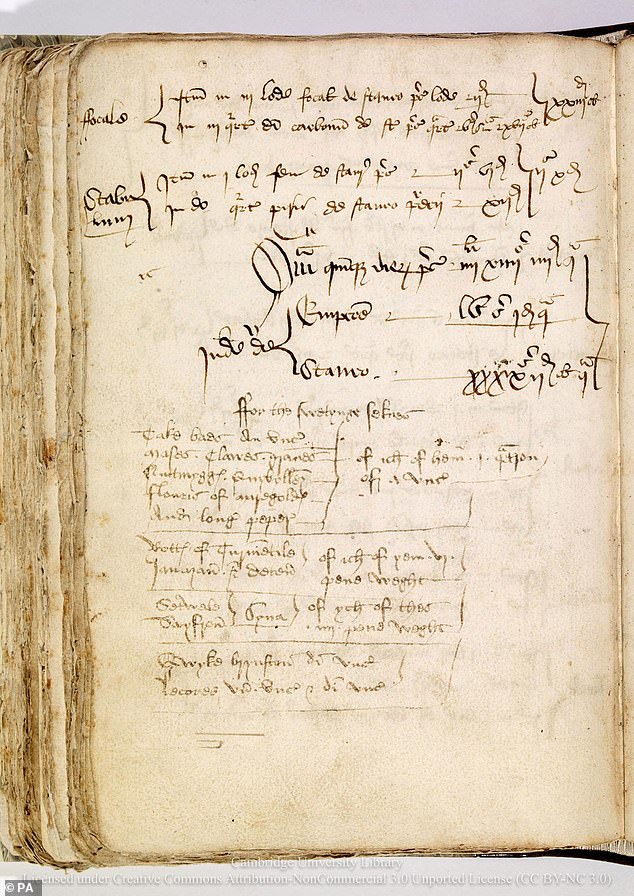 A recipe ‘For the sweating sickness’, inserted within a compilation of household information