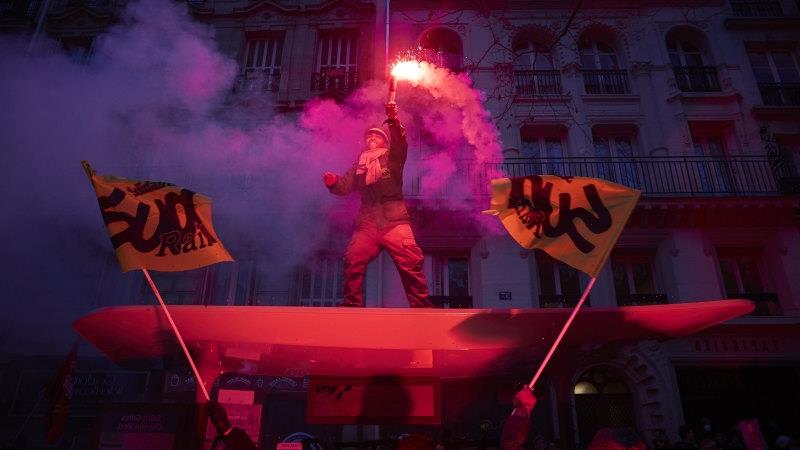 Emmanuel Macron says it’s the just and responsible thing to do. He’s asking his French compatriots to work two years longer, retiring at 64 instead of the current legal minimum age of 62, to qualify for a full pension.

From an economic point of view, change is drastically needed. France spends 14 per cent of its gross domestic product, the measure of the quantity of goods and services produced, on public pensions, nearly double the OECD average. Without changes in the retirement age, it’s estimated that would increase to 15.5 per cent by 2050. His proposal is for the change to take effect by 2030. 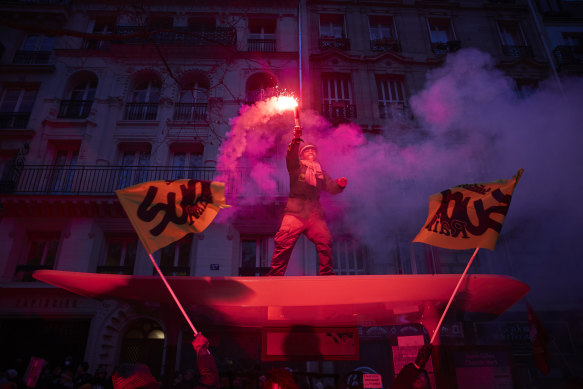 A member of the SUD stands on top of a bus shelter waving a flare as more than 400,000 people take to the streets of Paris on Thursday, as part of a nationwide strike against President Macron’s pension reform plans.Credit:Getty

There’s just one problem: the French hate it. More than a million people marched through 200 provincial towns and cities on Thursday to denounce plans to raise the retirement age, with a wave of nationwide strikes halting trains, disrupting schools and cutting electricity production.

The proposed change comes in the middle of a cost-of-living squeeze, as part of the fallout from Russia’s invasion of Ukraine, and constant reports of run-down public services that have left many feeling anxious and angry.

Around the Bastille area of Paris, where unions claimed 400,000 people protested, some demonstrators hurled bottles, bins and smoke grenades at police who responded with tear gas and charged to disperse the troublemakers.

Some 30 people were arrested, mostly members of a 1000-strong radical group called “Black Blocs” who wore masks, helmets and black clothes, police said. No major violent incidents were reported elsewhere in France, with at least 40,000 people marching in Lyon, 30,000 in Toulouse, 26,000 in Marseille, 15,000 in Montpellier and 14,000 in Tours. 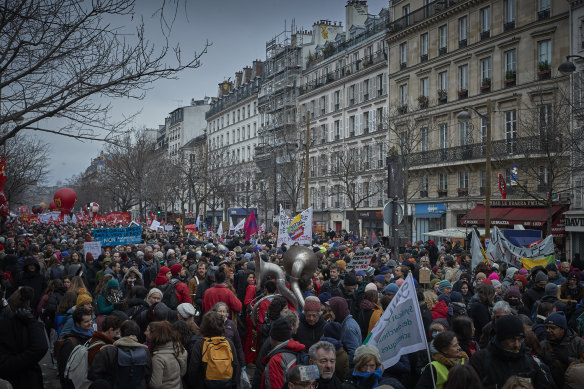 Over 400,000 people take the streets of Paris as part of the anti-retirement reform protests on Thursday. Credit:Getty

The issue has provided a proverbial noose around the neck of every French leader since socialist François Mitterrand cut the retirement age from 65 to 60 in 1982.

It is the seventh attempt at reform since and every subsequent attempt to reverse that change has led to mass opposition on the streets. But in most cases, the reforms did in the end go through. In 2010, Nicolas Sarkozy raised the retirement age to 62, despite weeks of protests.

An Ipsos poll published on Wednesday found that 61 per cent of respondents opposed Macron’s proposed reform with reasons cited that it was unnecessary, poorly designed or ill-timed. But 81 per cent acknowledged in a separate question that the system needed fixing.

Sofiane, a 49-year-old Amazon worker, told the France 24 news channel he would not be able to keep going. 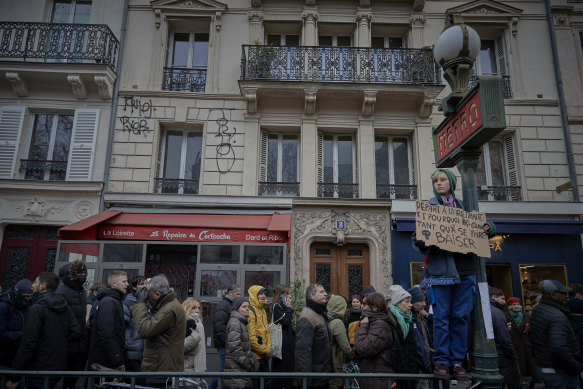 Protesters outside a Metro station in Paris.Credit:Getty

“My colleagues and I were talking about the reforms this morning. Everybody’s disgusted. It depresses me. I’m 46 years old, and I already find it hard – so if I’ve got another 20 years to go…,” he said.

“I get up at half past three. I load and unload parcels for Amazon. Every day I handle between 10 and 15 crates of packages. Each weighs 130 kilos. It’s very physical work – and you have to do it quickly. So it’s stressful.”

Dominique, a 59-year-old old retail supervisor in Paris said the proposed changes were too much.“We’ve got a lot of young people in this country looking for work; and I think they should be trained to fill the jobs of people retiring at 62.

“I’ve never gone on a protest or gone on strike in my life, but this time, if they ask me, I will. Because we’re coming up against something really unpalatable. If you ask too much of people, it just becomes unbearable for them,” she told France 24. 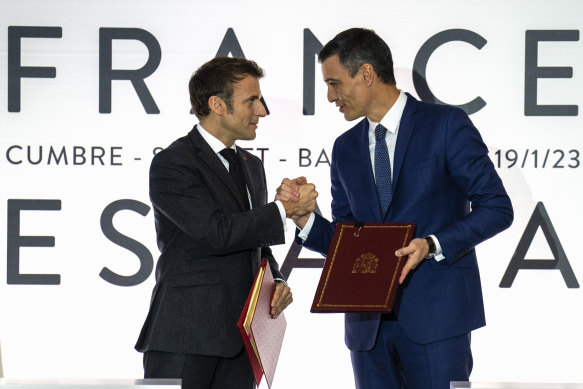 French President Emmanuel Macron has been meeting with his Spanish counterpart Pedro Sánchez in Barcelona. Credit:AP

Macron has promised to tackle the issue since he was first elected in 2017. But he has been unable to find consensus amid a previous version of the proposal which led to the longest period of strikes in the country since the uprising of 1968. That version was finally shelved when COVID-19 struck in 2020.

The second plan was part of his re-election manifesto last year, with sweeteners including an increase in the minimum pension to about €1200 ($1880) a month, from about €900 now and concessions for older people who work physically demanding jobs.

But Macron, who is less than a year into a second and final five-year term, remains unpopular, with an approval rating of only 36 per cent. His poor image outside the prosperous cities contributed to the “yellow-vest” insurrection four years ago and could potentially do so again.

And he raised eyebrows by spending the day in Barcelona, where he was accompanied by 11 ministers for a Franco-Spanish summit.

During a news conference, he said the country must complete the reform to “save” the pension system.

“We will do it with respect, in a spirit of dialogue but also determination and responsibility,” he said.

Because of improving life expectancy in France, a retired man now spends an average of 23.5 years in his armchair or pottering around the garden in retirement, while a French woman now lives 27 years after she stops working. As a result, the share of 55 to 64-year-olds still working is just 57 per cent, compared with 74 per cent in Germany and 65 per cent in Britain.

It is now a make-or-break problem for Macron, who lost his parliamentary majority in June, and now has to secure the support of opposition parties. His centrist alliance holds 250 seats – 39 short of a majority. But the Republicans, who when in power themselves raised the retirement age, are not keen to hand Macron an easy victory.

Buoyed by the numbers, the country’s leading trade unions now want a second day of strikes on January 31 in a bid to force the president and his government to back down.

Frédéric Souillot, general secretary of the Force Ouvrière union, said he wanted to “block the economy”.

“We are heading towards a tough conflict,” he said.

Prime Minister Elisabeth Borne could be Macron’s secret weapon in gaining the support he needs for the reform, which is still to be debated in parliament.

“Four out of 10 French people, the most fragile, those of the most modest means, those who have tough jobs, will be able to retire before [they are] 64 years old,” she said.