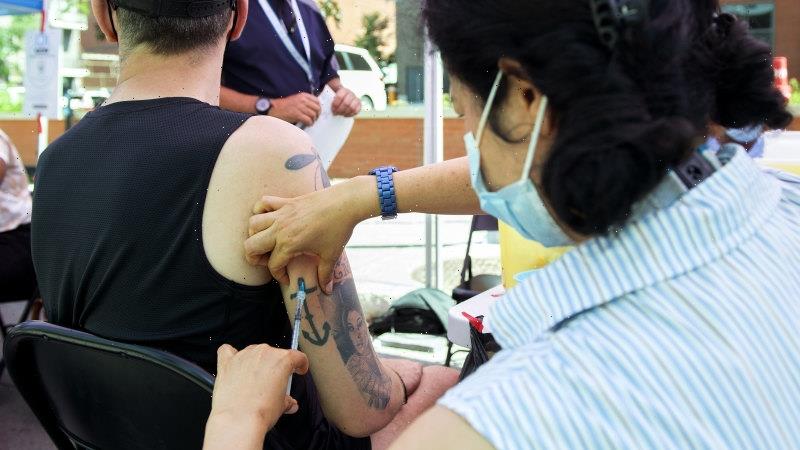 LGBTQ health organisations are calling on the government to immediately roll out a monkeypox vaccine program as case numbers continue to climb.

Monkeypox has spread quickly throughout Africa over the past decade. The spread, possibly driven by deforestation, had been largely ignored by the developed world – until in May, when cases appeared in America, Europe and Australia. 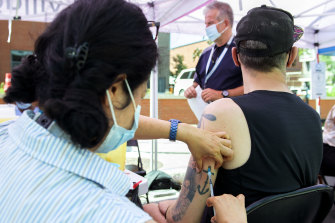 A man receives a monkeypox vaccine at a clinic in Montreal, Canada, on the weekend. Australia is yet to announce a similar program.Credit:AP

Since then, global case numbers have rapidly accelerated, prompting the World Health Organisation to call it a global emergency on Sunday.

The virus spreads through close contact and causes people to develop extremely painful skin lesions – blisters similar to chickenpox, but larger – which take weeks to clear.

There are now at least 41 cases in Australia. For reasons scientists do not yet understand, the current outbreak is largely affecting men who have sex with men – although there have been cases in other groups, including children.

Australia has an approved monkeypox vaccine, but, despite other countries rolling out vaccine programs – in New York, appointments have booked out in minutes – Australia is yet to initiate its own program.

“We’ve really got a shot at eliminating this in Australia, if we’re able to act expeditiously,” said Colin Batrouney, Thorne Harbour Health’s director of communications. “We’re seeing these cases in gay men at the moment, but I know we’re seeing heterosexual transmission in the US. So, it’s certainly not restricted to gay men.”

Thorne Harbour’s call for a vaccine rollout was backed by the Australian Federation of AIDS Organisations, which also called for government funding for a virus and vaccine awareness campaign.

However, Australia’s only approved monkeypox vaccine, ACAM2000, is not suitable for people who have compromised immune systems, such as those living with HIV. An early study of the outbreak in May found that 41 per cent of confirmed monkeypox cases globally were in men with HIV; they are also at higher risk of severe illness from the virus.

A newer vaccine, Jynneos, is registered in the US and UK but not Australia.

“This vaccine needs to be made available in Australia if we are to control this serious emerging health issue,” Thorne Harbour Health’s acting CEO, Johann Ruth, said.

“There is a high level of interest and motivation in the community for vaccination and prevention. At this time, we should be capitalising on that momentum so that this infection does not become widespread in the community.”

The federal government did not respond to questions by deadline. Last week federal Health Minister Mark Butler said health regulators had not yet received an application to register Jynneos, but would prioritise it if one were made.

James McMahon, head of the infectious diseases clinical research unit at the Alfred Hospital in Melbourne, treated one of the first cases of monkeypox detected in Australia this year.

He told The Age that most cases he and his colleagues had seen did not look like typical monkeypox infections: These cases were mild and often started with just a rash.

“That’s what everyone’s asking globally: Why is this so different to what we know about monkeypox? But it’s a good thing if this isn’t as severe,” he said.

Two genetically distinct clades of monkeypox circulate in Africa, and the current outbreak appears to be driven by the less-severe version of the virus, McMahon said.

“If the skin breaks with ulceration, the bacteria that live on the skin can get in, [and] you can get an infection. The lesions can be painful in themselves,” he said.

“You can get lesions in the mouth, the anus. It’s no fun. No one wants to be covered in lesions, and they take a few weeks to go away. It’s not like chickenpox.”

Despite the name, scientists do not know the natural animal reservoir for monkeypox, but it is often spread by rodents.

In Africa, between three and 10 in 100 infected people will die from the disease. However, very few deaths have been reported during the current outbreak. Of 14,000 cases this year, there have been just five deaths, all in Africa, according to the World Health Organisation.