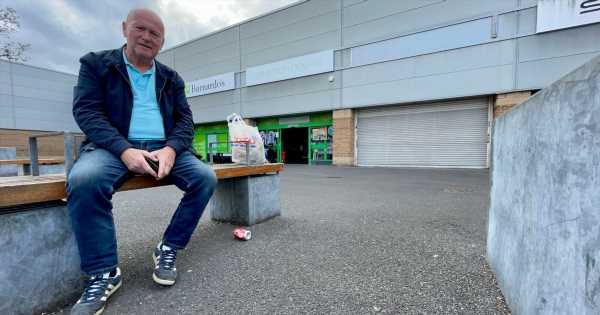 Shops closed, shutters down, and what was once a bustling hub of noise and activity now bears more resemblance to a "ghost town".

Residents of Droylsden used to have a shopping precinct they were proud of, filled with a constant stream of people, with its regular cluster of market stalls a popular feature.

But after the devastating impact of the Covid pandemic, followed by disruptive transport works and now a cost of living crisis, what is left is little more than an empty shell.

"It’s like a ghost town, that’s the only way you can describe it,” Christopher James told theManchester Evening News . The 76-year-old, who grew up in Droylsden but now lives in a town nearby, added: “Obviously all the shops have closed down.

"The area itself has gone a bit downhill, it’s not as clean and from what I’ve heard there is a lot of crime, especially around the tram stop. It used to have a market; it was a lot busier than it is now. It was quite popular, it was buzzing."

Residents have now resorted to travelling to other nearby towns to get their goods. “The council has forgotten about it," Anthony Smart, 75, said. "About 10 years ago, the shops were open. It was very clean and tidy.

"It’s very run-down. The council aren’t doing any road sweeping and the drains are clogged. I think the rent prices are too dear and that’s why shops can’t stay open. They can’t take enough money.”

Tameside Council have denied any drainage issues and insisted that improvements are in the works for the privately-owned precinct, with councillor Gerard Cooney promising to the MEN it has a "big future", but admitted its success depended on engagement from locals.

Small businesses are the ones at the greatest risk, with Cooney urging Droylsden's residents to support local companies to help them survive. The decrease in the number of big businesses has created a knock-on effect for the smaller firms too, as they have been unable to capitalise on any passing trade.

It comes amid a testing time for the UK high street in general, with official figures from the Local Data Company released last September recording more than 8,700 chains closing last year, though that figure is expected to be higher.

The boom in online shopping has been the catalyst for the growing decline in regular in-store shoppers, with Droylsden's precinct among those to feel the brunt, leaving only discount stores such as Poundland behind. “It’s gone to pot,” catering worker Jane Lee, 55, says of Droylsden. “It used to be great. There used to be a a square, it was a buzz of shops. It had a greengrocers and things like that.

"There’s a lot of empty shops now; it’s just not very nice anymore. We used to have a market which was shut down – that was well used. It’s getting better for pubs, but shopping wise, we could do with some nice eateries. We have to travel for clothes, we only have a Select.

"It’s really sad because Droylsden used to be a nice buzzing shopping area. People used to travel here; it was good for young and old. It’s sad for the older ones. Rent is too expensive; it’s a shame.”

Couple Elsie and Harold Lightfoot used to live locally and still visit Droylsden regularly after moving to Wales several years ago, but were stunned by the state of the shopping centre on their return.

“It dropped off while we were away for a few years,” Harold, 84, says. “We came back after living in Wales and it all seemed different. There was a popular restaurant that did really well and a travel agents. It had everything you needed.”

The precinct has been owned since 2019 by New Era Properties, who have already spent £100,000 on refurbishments and insist they are planning to invest more in the coming years. They have already received planning permission from the council for new venues and hope landing one of the big food store chains will attract other businesses to follow.

Cllr Cooney said: “No one spends millions buying this level of real estate, just to leave it to rot. As I’ve said the Council have never owned the precinct. It’s always been privately owned. The new owners want to change the precinct and have plans to change the offer there.

“That sadly, for the time being, means closing shops to refurbish them, and walking around the area, you can see the green shoots and the growth New-Era are creating as they redevelop the precinct."

New Era are keen to buy the old Natwest bank while Cooney says the council "are in discussions" to convert the main building in the town to "apartments or an Aparthotel with the tram". He adds that there is a "huge demand" to live in Droylsden with 600-700 new houses being constructed, while a new concert venue opening in Eastlands "means there is a big demand for hotel rooms".

New Era told the MEN: “We believe the Council are supportive of our wider vision for the area and that we will be able to continue to work with them in order that further progress on delivery of our overall scheme can be delivered soon.

“We are always keen to hear from any new retailers who wish to open in the town. We are in negotiation with new operators wanting to open in the centre, but it is important that, given the recent epidemic that those establishments have just struggled through, local residents continue to support what they already have – nothing encourages new investment more than thriving existing enterprises.

“We are investing in the town because, despite the purported sentiments you are picking up, we believe Droylsden is a great town with potential to be even better."

Cllr Cooney added: “We as councillors who live in Droylsden and use the shops are as frustrated as everyone else regarding the time it takes but we must also reflect on the fact we have had a hiatus as we have faced the pandemic and this has also challenged the viability of small businesses.

"Together with people shopping locally the precinct has a big future.“