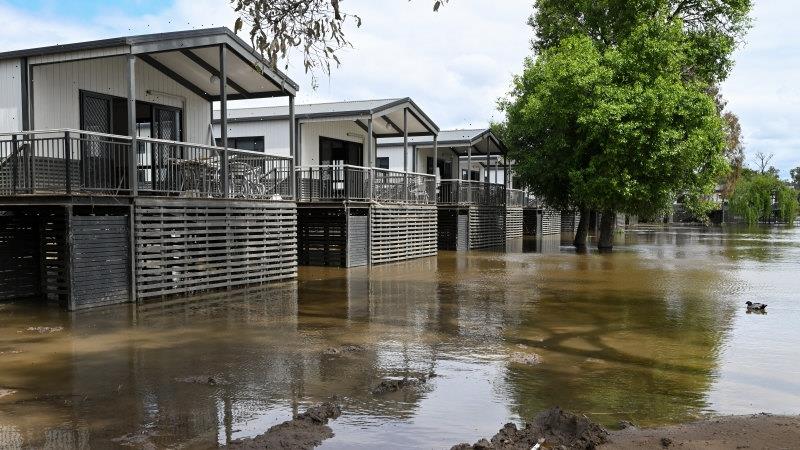 This summer was supposed to mark a return to busy holiday trade for Victoria’s tourism sector after the pandemic dealt two years of economic pain and disruption.

But Victoria’s devastating floods have upended those hopes for many tourism operators across the state, while concerns rise that the disastrous water damage to the state’s road network will reach $1 billion. 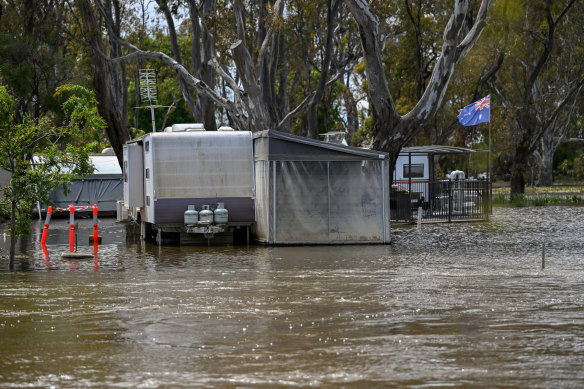 Floods have caused extensive damage to caravan parks across the state, dashing hopes of a strong summer of economic revival for many businesses. Credit:Joe Armao

The flood threat continues for many communities along the Murray River, while others that have already been inundated continue the clean-up that may stretch well beyond the summer holiday season.

More than 480 roads remain closed throughout Victoria, severely limiting access to many small towns whose economies rely on tourism, just before holidaymakers prepare to spread out across the state for the Christmas break.

But some businesses say visitors’ concerns about the floods have resulted in cancellations, even though they are open and safely accepting guests.

“Significant additional disaster funding is urgently needed for the repair work that now must be done,” he said.

With many roads underwater and some communities still preparing for the floods to arrive, the extent of the water damage remains unknown.

In northern Victoria, the Goulburn River flooded the entire Discovery Parks Nagambie Lakes caravan park, which included 56 tourist cabins and 136 powered sites for camping and caravans, as well as 200 spots for “annuals” who holiday at the park regularly.

An extensive clean-up is under way, with workers stripping the walls and floors of cabins that were extensively damaged by floodwater even though some were built high off the ground on stilts. 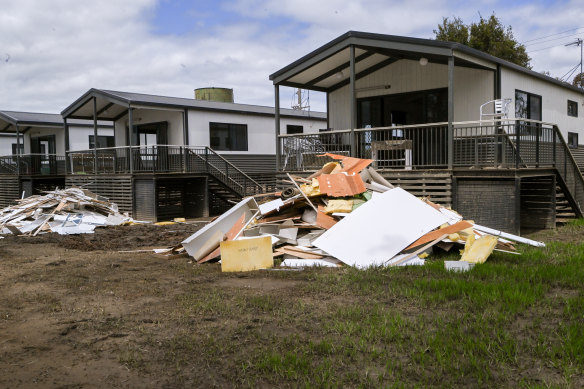 Workers have piled plaster, wood and insulation outside the cabins, while much of the park still remains underwater.

The Goulburn River rushed through the vast site with such for force it lifted caravans from their sites and swept away personal belongings, including canoes and toolboxes. 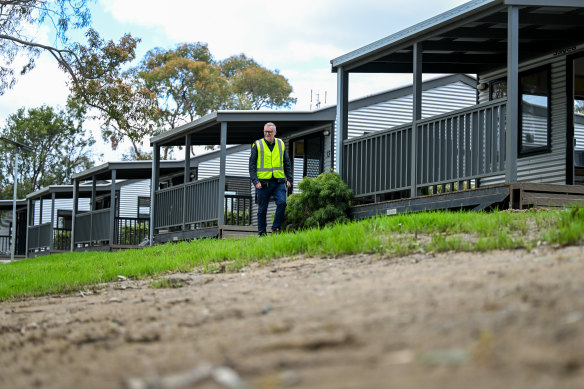 Discovery Parks’ Matt Lang outside cabins that were flooded in Nagambie. Credit:Joe Armao

Lang said many guests at the park holidayed there every year and made an important economic contribution to Nagambie, where the town centre was spared the worst of flood damage.

“They’ve created traditions for their families.”

At nearby Mitchelton Estate, head of hospitality Martin Garrett said the business – which includes a winery, hotel and restaurant – had reopened two weeks after its cellar and acclaimed art gallery were extensively damaged by floodwater.

Estate staff managed to move about 120 artworks to safety, but many could not be moved before the floodwaters arrived.

Some paintings have been shipped to Canberra for specialist restoration

“We got a lot of the culturally significant pieces out, which is great,” Garrett said. “But unfortunately, there wasn’t time to get everything.”

The gallery is yet to reopen.

Garrett said guests had cancelled their bookings immediately after the floods, and the Melbourne Cup weekend had been quiet, but confidence was returning.

“We are open. The town is open. We want people to come back.” 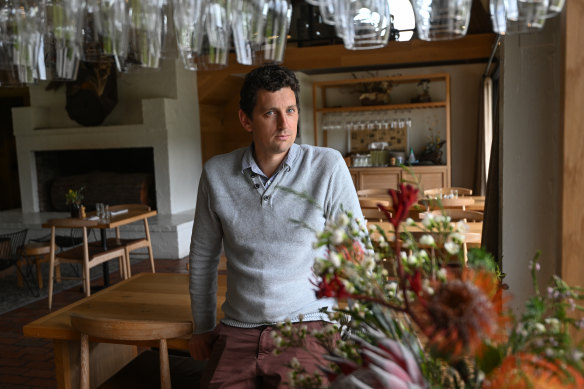 However, Garrett said the closure of the Nagambie Lakes caravan park was a blow to the town.

“We certainly do get trade from the caravan park.”

Strathbogie Shire mayor Laura Binks said the council was working to fix and reopen roads, but it could take three months to examine the extent of the damage.

“Flooding has damaged our roads so badly we must look at repairs that are above and beyond our normal maintenance programs,” she said.

Binks said most businesses in the shire remained open, but warned visitors should take care on damaged roads.

Lee Rowland, president of business and tourism group Go Nagambie, said the holiday season was likely to have a slow start, and the damage to the caravan park was a loss. However, he remained confident that visitors would return.

“We’re still expecting to have a busy summer,” he said.

A spokesman for the Andrews government said it was backing businesses across the state to get back on their feet, citing more than $1.4 billion in flood support programs funded together with the federal government.

“We’re making sure flood affected communities have the support they need to rebuild and reopen roads as quickly and safely as possible,” he said. 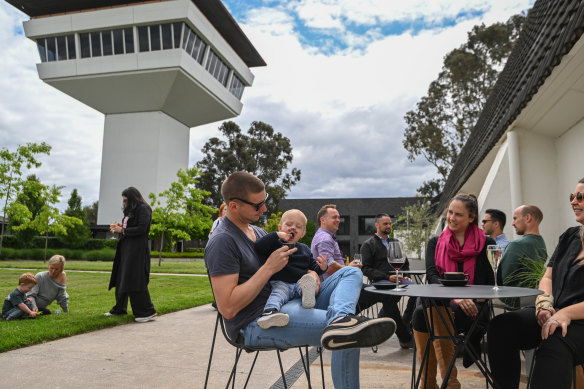 Some customers have begun returning to Mitchelton Estate in Nagambie. Credit:Joe Armao

The government has allocated $165 million for emergency repairs to reopen roads, and it insists workers have carried out repairs to more than 600 roads, including patching almost 55,000 potholes.

But opposition spokeswoman for regional recovery, Cindy McLeish, said roads had been neglected for too long and were crumbling as a result.

She said lack of maintenance around drains and culverts was contributing to the problem.

“The most inquiries I get into my office are about the state of the roads, and it’s been like that for years,” she said. 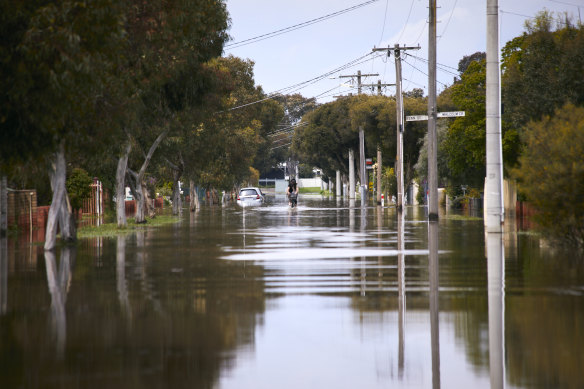 Many tourism operators along the Murray River are now facing their third summer of severely disrupted trade after the losses inflicted by the pandemic.

Barmah Bridge Caravan Park co-owner Brad Panos said much of the site remained underwater, and they would be lucky to reopen by the end of January.

“It’s a long road to recovery for us,” he said. “We were just clawing our way back from COVID.”

He estimated the business would lose about $100,000 in income. Panos said flood insurance had become impossible to find or far too expensive for caravan parks on rivers.

“But everyone in Australia wants to holiday on water, whether it’s a river or the ocean,” he said. “That’s why these parks exist.”

Murray Regional Tourism Board interim chief executive Will Flamsteed said many accommodation providers had “zero per cent occupancy” because roads were closed or customers had cancelled because of concerns about the floods.

“We’re seeing it in Echuca. We’re seeing it right along the river,” he said. “People going to Swan Hill or Mildura are cancelling because they think the whole Murray is flooded. There’s a lot of that at the moment.”

Flamsteed said tourism businesses on the Murray had also suffered in recent years from pandemic restrictions applied by both the Victorian and New South Wales governments. 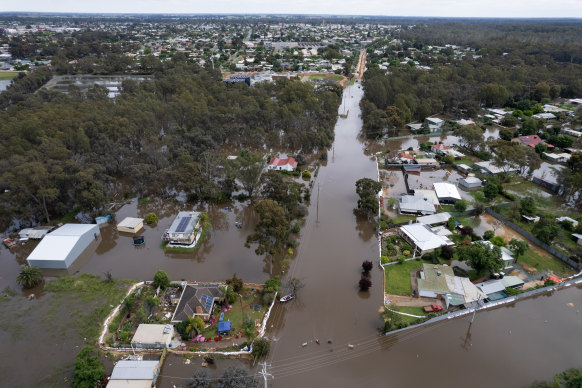 Flooding in Echuca is expected to inflict a heavy blow to its tourism sector. Credit:Jason South

He estimated the flood disaster would now cost tourism businesses tens of millions of dollars in lost trade.

Victorian Tourism Industry Council chief executive Felicia Mariani said the Murray region was among the hardest hit by the floods.

“These people will not be recovered in time to welcome back Christmas visitors,” she said. “We know many people have started shifting their bookings from the Murray to Gippsland.”

She said businesses that relied on natural surroundings, including caravan parks, were unable to secure affordable flood insurance.

Mariani called on the state government insurer, Victorian Managed Insurance Authority, to intervene and underwrite insurance for tourism businesses – at least on a temporary basis.

A spokesman for the authority said it insured government departments and entities as prescribed in the relevant act of parliament or as directed by the assistant treasurer, who is the responsible minister.

Get to the heart of what’s happening with climate change and the environment. Our fortnightly Environment newsletter brings you the news, the issues and the solutions. Sign up here.

05/11/2022 World News Comments Off on In regional Victoria, summer tourism hopes washed away with the floods
Markets