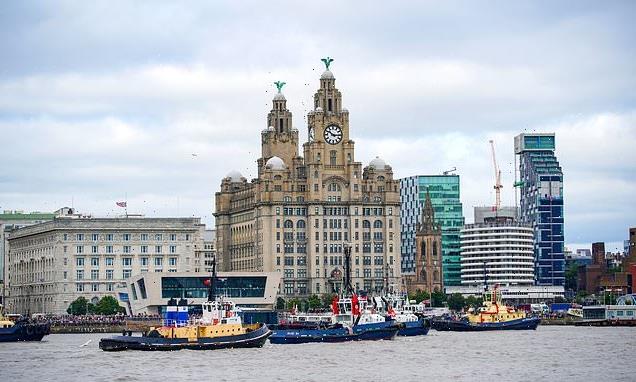 And now back to the strikes: Hundreds of Liverpool dock workers walk out TONIGHT hours after the Queen’s funeral over ‘unreasonable’ 8.3% pay rise – with a fresh round of rail chaos planned for October that will hit the Conservative Party Conference

Hundreds of dock workers will launch a two-week strike tonight as a temporary ceasefire following the death of the Queen comes to an end.

Members of Unite at the Port of Liverpool will walk out after rejecting a below-inflation pay offer.

The Peel Ports Group, which operates the port, said workers had dismissed the 8.3 per cent pay rise, enhanced with a one-off payment of £750.

Unite said it was a real-terms pay cut because of the soaring rate of inflation and argued that the port’s owners could afford a higher increase.

The strike seems a resumption of industrial action over pay as the cost of living increases. Strikes including action on the railways and at Royal Mail was postponed following the death of Elizabeth II.

But unions are set to go ahead with action now that her funeral has taken place.  Members of Aslef will walk out on October 1 and 5, which will affect travel for delegates and visitors to the Conservative party conference in Birmingham.

Last week figures showed the rate of Consumer Prices Index inflation fell to 9.9 per cent in August, from 10.1 per cent in July.

The surprise fall is a small but welcome boost to the economy for the new Government of Liz Truss, though the current rate is still close to a 40-year high.

The ONS said the largest cause of the drop was a fall in the price of petrol and diesel. But it also warned that soaring food prices were keeping the rate high. 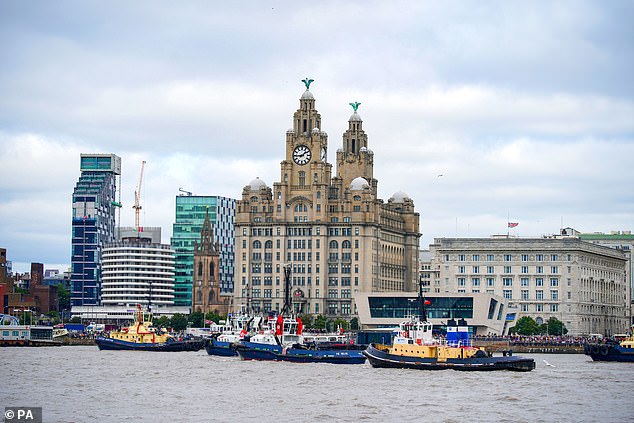 Members of Unite at the Port of Liverpool will walk out after rejecting a below-inflation pay offer. 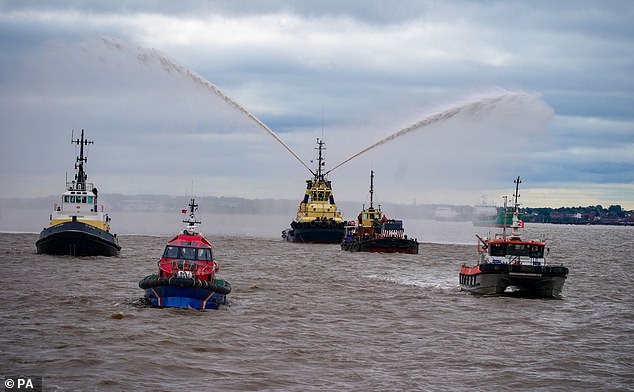 The Peel Ports Group, which operates the port, said workers had dismissed the 8.3 per cent pay rise, enhanced with a one-off payment of £750. Pictured: River tugs perform the Fleur De Lis on the River Mersey for a maritime tribute to Queen Elizabeth II.

‘This is bad news for our employees, families and other local employers.

‘We fully recognise our colleagues’ concerns on the cost of living crisis, and that’s why we have responded with a pay package that represents a 10 per cent average increase in annual pay.

‘The Port of Liverpool is a major employer in the Liverpool City Region.

‘We have invested more than £1.2b over the last decade, transforming the prosperity of the region, creating more than 900 new skilled jobs and, in turn, supporting more than 7,200 additional local jobs in the supply chain.

‘We urge the union to work with us at the negotiating table so that together, we can find a resolution.’

Unite general secretary Sharon Graham said: ‘Workers across the country are sick to death of being told to take a hit on their wages and living standards while employer after employer is guilty of rampant profiteering.’

She said the port’s owners needed to table a ‘reasonable offer and fulfil its previous pay promises.’

The company said it has also made a commitment to a shift pattern change that will result in a 25 per cent reduction in night shift working.

The average salary for container operatives would increase to around £43,000 a year, significantly above the Liverpool City Region and national average, it added.

RSCT has connections to a range of countries including, Canada, Spain, Italy, Portugal, Cyprus and Turkey, as well as feeder services connecting Liverpool to India, Africa, South America and the Far East.

Liverpool 2 is one of the most operationally efficient and modern terminals in Northern Europe, capable of accommodating some of the world’s largest container vessels.

A total of 845 people work in the Port of Liverpool’s containers division, which handled approximately 525,000 containers in 2021.

The goods inside the containers were distributed all around the world and included imports and exports, such as retail and industrial products.

Aslef, meanwhile, said it is in for the ‘long haul’ as the rail disputes remain deadlocked. General secretary Mick Whelan said: ‘We would much rather not be in this position. We don’t want to go on strike – withdrawing your labour, although a fundamental human right, is always a last resort for this trade union – but the train companies have been determined to force our hand.

‘They are telling train drivers to take a real-terms pay cut. With inflation now running at 12.3 per cent – and set, it is said, to go higher – these companies are saying that drivers should be prepared to work just as hard, for just as long, but for considerably less.

‘The companies with whom we are in dispute have not offered us a penny. It is outrageous that they expect us to put up with a real-terms pay cut for a third year in a row.’